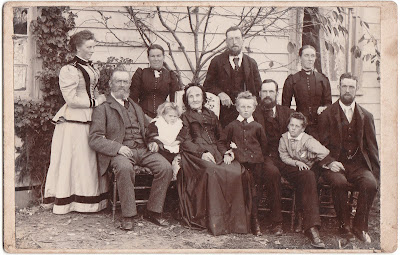 above: unknown photographer.reverse inscription:Standing: Aunt Rachel, Aunt Polly, Mr Matthew Taylor, Mrs Matthew Taylor.Sitting: Mr Taylor (Senior), Lucy Taylor, Mrs Taylor Senior nee Sarah Housley, John Taylor Junior, Mr John Taylor Senior, Willie Taylor, Mr Ben Taylor.
We have this week to record the death of another old and respected settler of the Clutha district. We refer to Mr Samuel Taylor of Riverside, Port Molyneux, who died on Friday forenoon, aged 69 years. The deceased was born at Derbyshire, England, and came to the colony twenty years ago. Shortly after his arrival he leased a farm on the river bank from Mr Telford for eight years. He afterwards purchased the farm and continued to reside on it up till his death. He never took any active part in public business, he devoting his whole attention to his farm and proving a kind and obliging neighbour. He married in the Home country and his wife died only about a year ago.

Their family consisted of five sons, two of whom died young three survive and are farmers in the district. The deceased had been ailing for a few months, and indeed seemed gradually to fail ever since bis wife's death. He was confined to bed for about a month and died on Friday, the cause being bronchitis and heart disease.
Clutha Leader, Volume XXIV, Issue 1233, 18 February 1898, Page 4