below - an unidentified N.Z Rifle Volunteer

At the Volunteer Review in 1885 Corporal Meers and Sapper Donovan of the Engineers, the photographers of that corp, had been detailed to photograph the scene. - Star , Issue 5437, 10 October 1885, Page 4

Stanmore Band. — The members of this popular band have celebrated the conclusion of the fourth year of their organisation by having a number of photographs of themselves taken and mounted, to be preserved as a memento. The work has been done by Messrs Donovan and Meers, who have arranged the 37 portraits, mounted on a handsome lithographed design, executed at the office of the Lyttelton Times Company. The photographs of the members are arranged around that of the bandmaster, Mr D. M'Killop, which is of "whole plate" size. The portraits of the other officers are cabinet-size, and those of the other members cartes de visite. The likenesses in all cases are excellent, and as specimens of photography the pictures take a high rank. They are enamelled in the latest style, which gives a brilliant glass like surface to the picture. The size of the frame containing the portraits is 40in by 32in. Orders have been given for 41 of these frames. One is to be sent to the Dunedin Band, another to that at Invercargill, and the others are for the members of the Stanmore Band and their friends.
Star, Issue 6071, 29 October 1887, Page 3 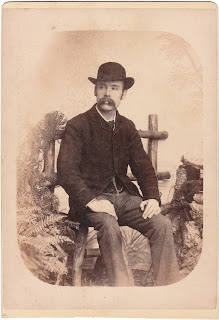 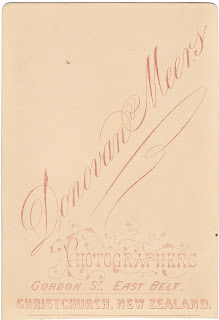 Posted by Early Canterbury Photography at 3:54 AM