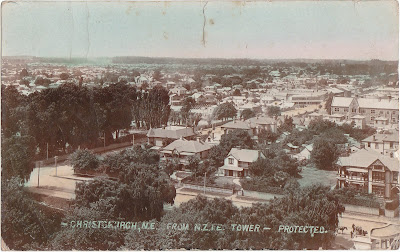 Francis William Dutch was born in Warminster, Wiltshire in 1855 the son of Henry Dutch, an iron and engine fitter and Mary Jane Dutch nee Whally. In the 1881 census he was aged 25 and living with his parents at 41 Boreham Road, Warminster, he was employed as a photographer's painter. He married Mary Ann Bull in 1883 in Derby.

By 1886 or 1887 he was in New Zealand and with his brother-in-law William Bull had a photographic studio at 113 Victoria Street, known as the Albion Studio. The new studio opened on 19 February 1887.(3) A newspaper advertisements from that year shows that Dutch and Bull had worked for the London photographers A. and T. Taylor. (1) They remained in Victoria Street until early in 1895 when Dutch moved to 31 Armagh Street and later moving to 84 Lichfield Street about 1900. During the 1906-07 International Expedition he was one of the photographers for a series of postcards issued by Smith and Anthony. Dutch remained in Lichfield Street until about 1912.

He had one known daughter, Eva Grace Jane Dutch born about 1889, she married Charles Edwin Featherstone about 1913.(2)