There is on view at the studio of Mr. C. P. Browne, photographer, an enlarged photograph, mounted in oil colors, of the child of Wi Paraone, which, for finish and tint, is superior to most enlargements of the like kind we have seen. The picture represents the child life size, and delineates every expression of feature with an accuracy which is marvellous considering that the copy sent for enlargement was very much faded and indistinct. It has been produced to the order of Mr. C. P. Browne by Mr. Arnold of Auckland, the same artist who executed the portrait of the late Dr. Nesbitt which adorns the Poverty Bay Club Sitting room. As a work of art it is well worth inspecting.
Poverty Bay Herald, Volume VII, Issue 1138, 4 October 1880


Mr. C. P. Browne has come to the fore in the matter of cheap photography. The prices quoted in his advertisement are surely reasonable enough to induce all to have sun images of their noble selves taken, and there can be no doubt that numbers will not let the opportunity slip. The photo-enamelling process introduced by Mr. Browne is new, there being only one other studio in New Zealand which has introduced it, that of Bartlett of Auckland. By this method the photograph is not liable to fading as it is enclosed in a coating of gelatine, which protects it from atmospheric influences. The well-known style and finish with which the advertiser has hitherto accomplished his work, combined with the low price charged, will, we are certain, bring him a large number of sitters. 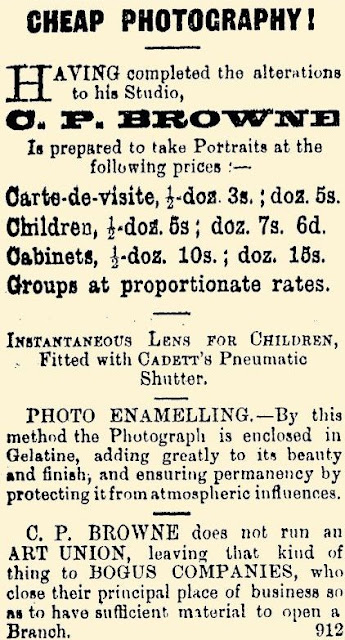 Mr C. P. Browne, photographer, has just made extensive alterations to his Studio Mr Brown's [sic] residence has been removed from Gladstone road, and the building has been entirely devoted to his business. He has now an office, comfortable waiting and dressing-rooms, a very large and well-fitted studio, as well as several spacious workrooms. The studio contains some artistic photographic backgrounds, as well as other devices of the art, and Mr Brown in his new quarters is sure to maintain that high standard of excellence of photographic work for which he is so well known. 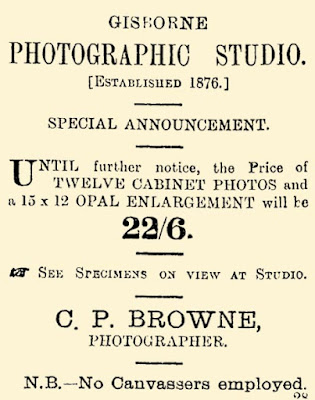 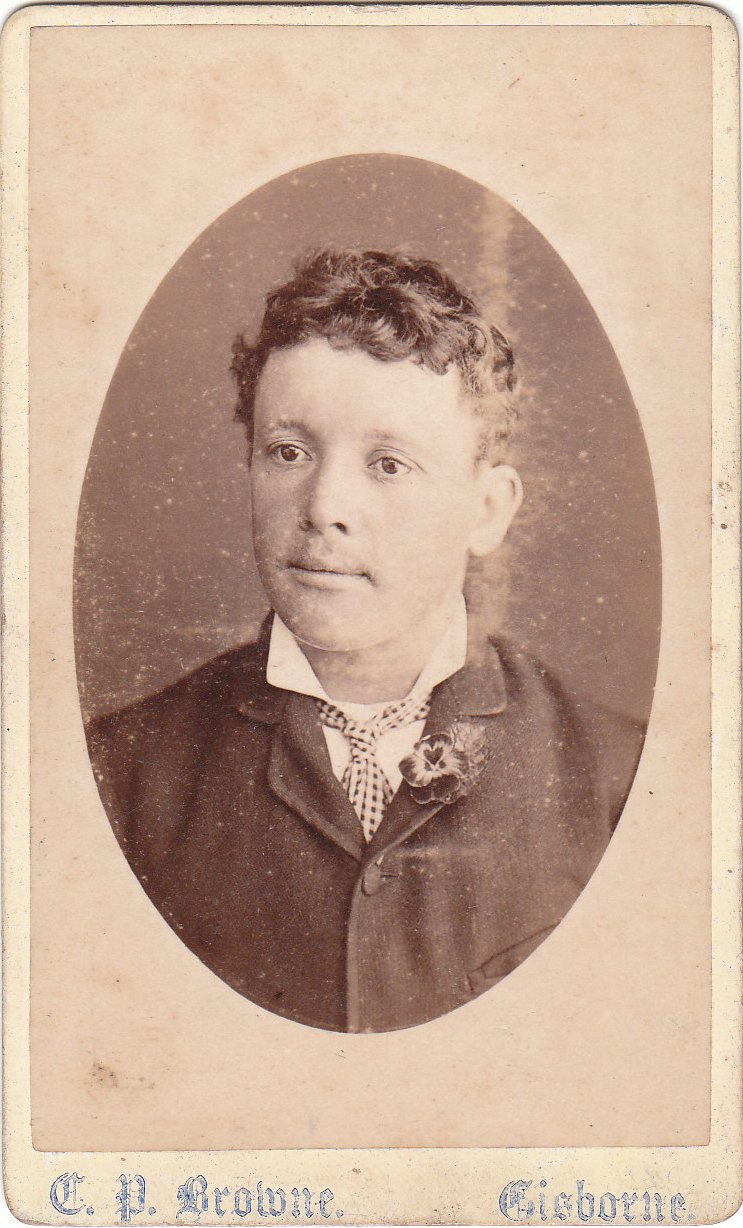 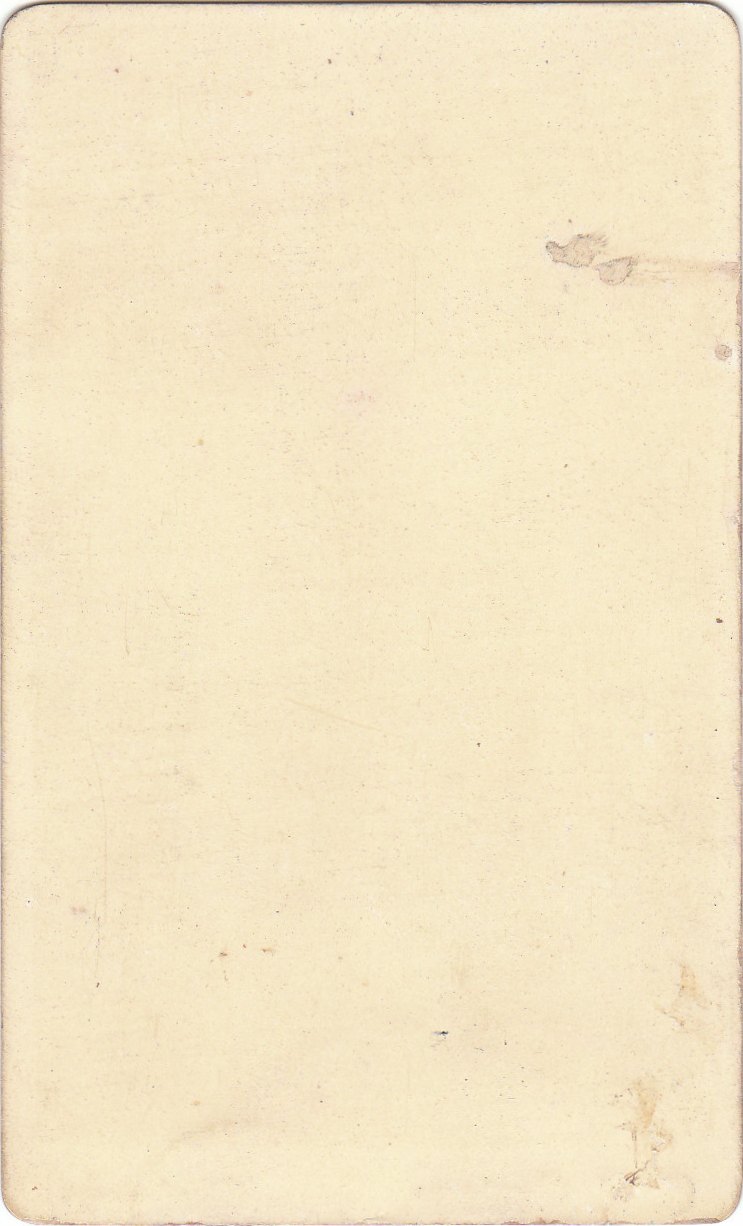 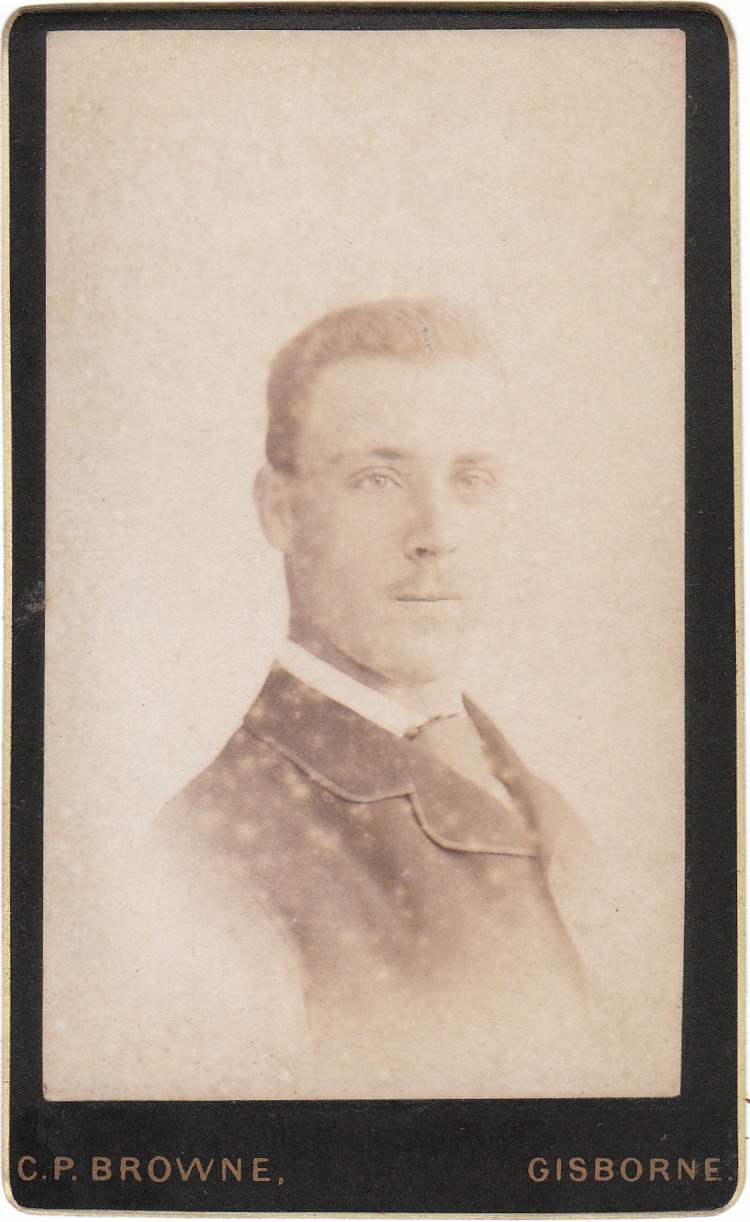 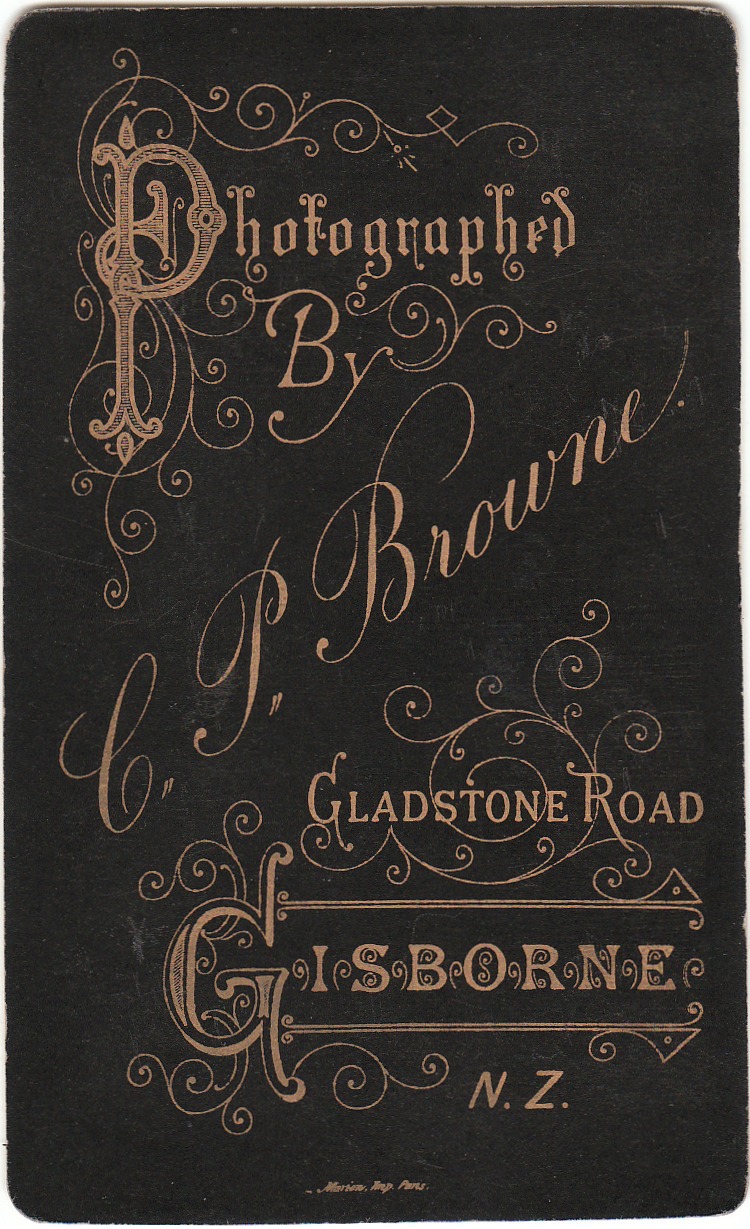 Mr C. P. Browne, the well-known photographer, has effected a very appreciable improvement at his place of business in Gladstone road by the enlargement of his show room. The adjoining shop, formerly occupied by Mr Bruce, saddler, has been annexed, and the extra space thus provided makes the photo gallery very large and roomy, and as it is well lighted the public are afforded very favorable opportunities of viewing the samples of Mr Brown's work that are there displayed.


Mr and Mrs C. P. Browne have returned to Gisborne after a very enjoyable four weeks' trip to Waikaremoana, Wairoa, and Nuhaka. The pleasure of the journey was somewhat marred by the long spells of wet weather which prevailed, keeping them prisoners in their tents at the lake for about a week. Both Mr and Mrs Browne come back enraptured with the lovely scenery they have visited. Perhaps they were fortunate in viewing Waikaremoana under storm as well as sunshine, for when the white horses were rolling across the lake, the waves beaten to spray and foam by the severe gale, it was a sight of exceptional grandeur.

In fine weather Mr and Mrs Browne went boating on the lake, and secured a number of splendid views, which will doubtless soon be exhibited at their studio. Descending from the lake to Wairoa, after a short stay in that pretty little town they drove to Nuhaka, and had a most enjoyable stay of a week at the hot springs, where, considering that be has just, commenced business, the lessee, Mr Johnston, provided excellent accommodation. Mr and Mrs Browne stale that very considerable improvements are being made to the springs by the custodian, who has provided much greater comfort and conveniences for ladies than were to be had formerly. Mr and Mrs Browne returned to Gisborne from Nuhaka by way of Wairoa and Tiniroto. 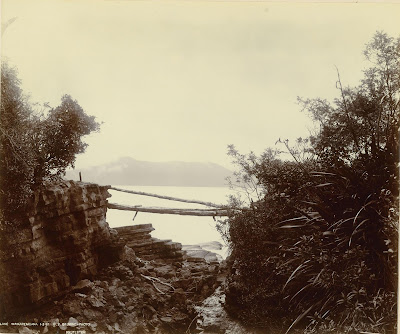 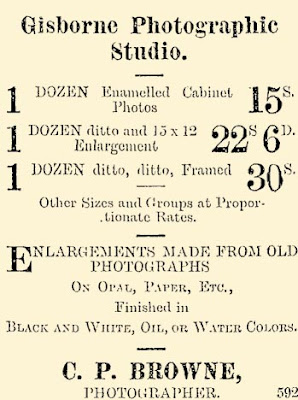 
On Friday the employees of Sarony, Auckland, presented Mr B. S. Cox, so long head printer of the establishment, with a serviceable present, on the eve of his departure for Gisborne, where he goes into business on his own account. Mr Ellerbeck, who spoke for the employees, dwelt upon Mr Cox's connection with the business, and wished him good luck and a big business in Gisborne. Mr Cox suitably responded, and said how grateful he was for the remembrance, showing that his efforts had been appreciated. It is understood that Mr Cox takes over the long-established business of Mr C. P. Browne.
Poverty Bay Herald, Volume XXVIII, Issue 9063, 4 February 1901


One of the oldest and most respected residents of Gisborne, Mr Charles Pelham Browne, passed away at his residence, Stout Street, on Thursday evening [25 May 1916], at the age of 76 years. Mr Browne arrived in Gisborne about 40 years ago from the Thames and Auckland, and established a photographic, business. He was a sergeant in one of the first volunteer companies established in Gisborne, and was also one of the oldest and most esteemed members of Abercorn Lodge. 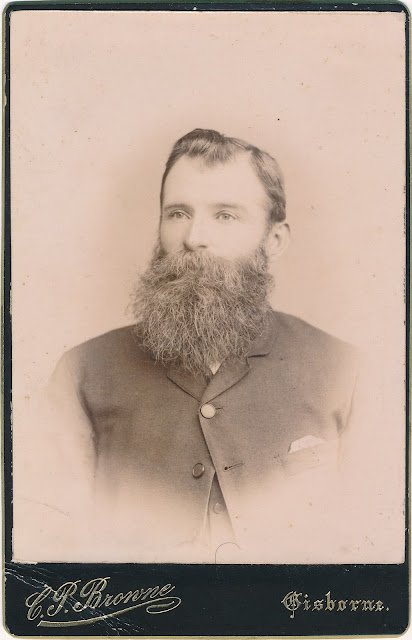 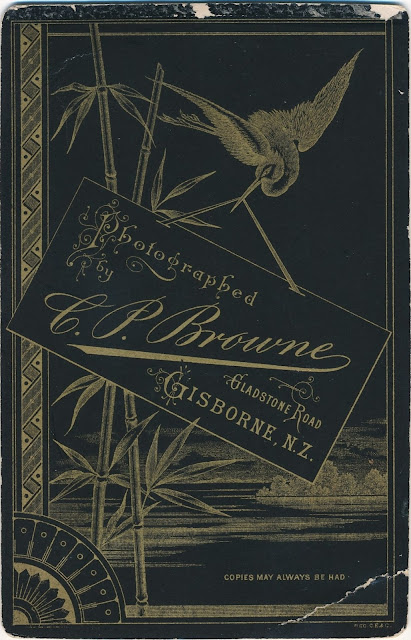