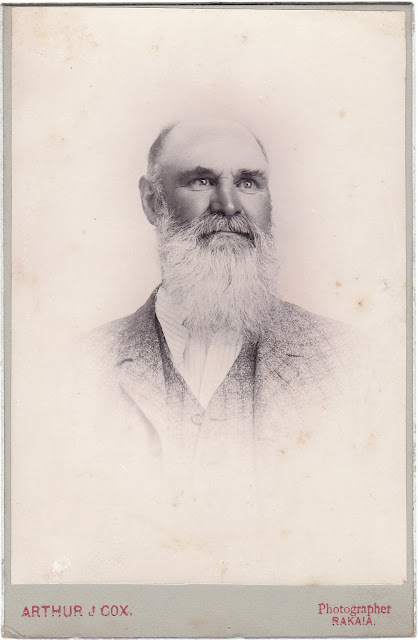 above - a cabinet card by Arthur J. Cox, photographer, Rakaia. 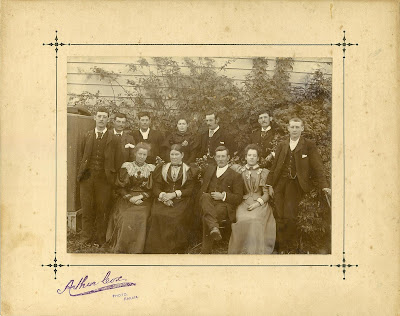 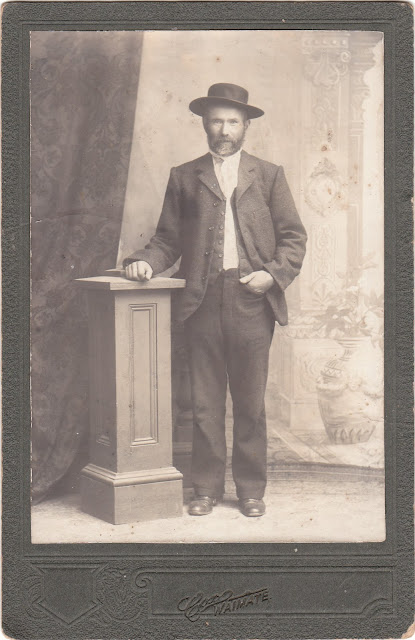 
A New Business - We beg to draw the attention of the public Waimate to the advertisement of Mr Arthur J. Cox, photographer, which appears in another column of this issue. We have visited his studio and found it to be well lighted and well appointed in every way. Mr Cox has provided all the necessary back-grounds and accessories, in fact every thing to be found in a first class city studio so that patrons may be photographed in a manner equal to Dunedin or Christchurch work. A visit to his window is sufficient to convince intending patrons of the excellence of his work. We trust that Mr Cox will receive the patronage of the Waimate residents for his enterprise in supplying a long felt want. 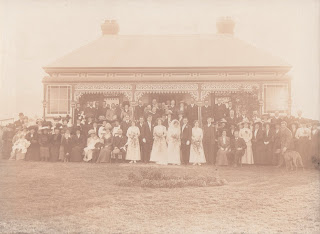 Obituary of William Cox
We regret to announce the death of Mr William Cox, of Rakaia, which occurred at his residence on Sunday. Mr Cox was a very old Canterbury settler and was formerly a schoolmaster at Rakaia, but has for some time past been carrying on a storekeeping business at Rakaia. He was the first schoolmaster appointed at Riccarton. The deceased gentleman, who was sixty-five years of age, was highly respected and esteemed, and his loss will be keenly felt in the district in which he has resided for so many years, Mr Cox has acted as correspondent and agent for the Christchurch Press Company for the past twenty-seven years.—'Press'
Ashburton Guardian, Volume XV, Issue 3333, 17 July 1894

Arabella Cox died 8 March 1899 at Rakaia aged 63 years. William and Arabella are both buried in the Rakaia Cemetery.

I am researching my family history and have been given a photo taken by Arthur Fox in 1900.
The subject was the Philip Family and was taken at the family home in Waimate.
Does anybody know what happened to the plates for photos taken by Arthur Fox?
Regards
Kevin Philip

Mostly likely they have been destroyed, but you could try the Waimate Historical Museum Email: wtemus@xtra.co.nz
or Waimate District And Historical Archives Email: waimatearchives@xtra.co.nz