Thomas Joshua Pickering was born in Greymouth on 8 November 1876 the son of Joshua Pickering, a gold digger and Jane Pickering nee Bramwell. He married Edith Madeline Brown at the Mission Church, Lakeside, Ellesmere on 25 April 1903. He was then employed as a photographer at Leeston. He died at Leeston on 7 January 1913, his wife died 6 December 1927 at Christchurch aged 58 years.

Mr T. J. Pickering has a replace advertisement in another column. The genial Leeston photographer has several new lines to offer, and invites inspection. Photographs are also being well taken as usual. Mr T. J Pickering, who has been seriously indisposed for about five weeks, has returned to Leeston. It was deemed advisable some weeks ago that he should be removed to Christchurch, so as to have the benefit of experienced nursing. As showing the wisdom of the course adopted, Mr Pickering is now quite himself again, and we heartily congratulate him on his recovery.
Ellesmere Guardian, Volume XXIX, Issue 2728, 27 January 1906


Mr T. J. Pickering, the photographer, , Leeston, has shown us the latest addition to his studio, in the shape of the latest up-to-date camera, one of the best which money can procure. Mr Pickering explained the working of it to our representative, who was very much struck with the modern appliances now in vogue. Mr Pickering will now be able to turn out photographs of any size, at even less than Christchurch prices. His last picture of the St John's Orchestra is a veritable triumph in photography. 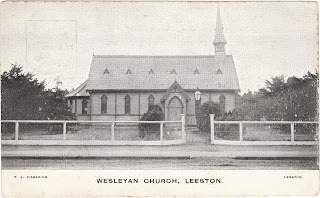 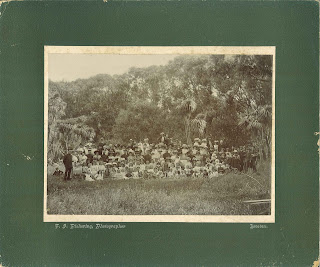 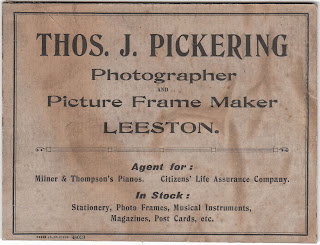 Posted by Early Canterbury Photography at 12:30 AM

I am wanting information about this photograph, I think my Great Great Grandparents, John and Emma CROAT are in it. What I want to know is what date it was taken and what was the occasion or event as there is a band in amongst the towns people.

sadly I have no information about who is in this photograph, what the occasion is or when it was taken.

I managed to track down the information I needed on this photograph and would like to share it with anyone else who is interested. I emailed the Leeston Library asking them if they had any information about the photo. The librarian there was most helpful, she contacted the archivist for the Ellesmere Historical Society who was able to help.

The photo is of a school picnic at Beachcroft c1910. George Benny gave the photo to the Society - George Edgar Benny is at the back with the white shirt and tie.

The librarian also had this to say; It must have been a Southbridge School picnic as George Benny went to Southbridge School and not Little Rakaia School which Beachcroft would have been closer to. Beachcroft is between the coast and Jollies Road which runs down from Southbridge to the Little Rakaia Huts. The Photo was given to us by a descendant of G E Benny. They must of had a brass band playing at the picnic as there are a few men with uniforms on and some carrying band instruments.

Thank you Angel! This is great info for my family tree and matches up perfectly with the info I had on George Edgar BENNY.

I am writing an in-depth social history of Southbridge and was very interested to find Angel's comments. I have more information on that photo of the school picnic, including the brass band names etc. if she is interested. It appears to be the Southbridge Presbyterian Sunday School picnic at Beachcroft which was in December 1910. The Southbridge School picnic in December 1910 was at Professor Bickerton's Wainoni Park, a very popular destination at that time for school excursions. I also have a very early (prob ca. 1865) photo which may show one of her ancestors, if her great grandfather was Henry Croat (son of John and Emma Croat). I hope that it is possible to make contact.

Hello Stephen, sorry can't help with information regarding who Angel might have been, I know nothing other than what is on the posts above. Probably also unlikely that she would see your post and the original post was over ten years ago.

Thanks, happy to wait just in case, and I guess there's always the possibility that someone else will see it who has Southbridge connections.

I am extremely interested in your in-depth history of Southbridge. I am a descendant of Joseph and Sarah Benny (nee, DOVE) who purchased Holly Farm in Leeston after coming from England on the Royal Stuart in 1861. Joseph and Sarah Benny (and the majority of their 10 children are buried in either Ellesmere or Springston Cemeteries). I have quite a lot of information on the Bennys and the past 4 generations from the point of their arrival in New Zealand. I also know my great grandmother and grandfather owned the first store in Lincoln township, and descendants still remain all over Canterbury. Please do not hesitate to contact me on crystal.benny@lincolnunui.ac.nz for any further information.
I look forward to hearing back from you.