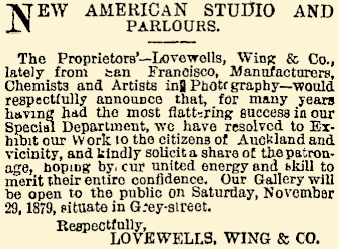 This studio was in business in Dunedin in June 1880 at 60 Princes Street under the name of the "New Gallery American Studio." They offered:
25 Exquisite Little Gems for 2s, 6d
12 Double Gems for 4s
12 Sunbeams for 6s.
They also had available, cards, cabinets and large pictures. They recommended the people of Dunedin call and see the latest novelties in photography, made only by Lovewell, Wing & Co.'s permanent lightening process. Pictures would be made and finished in ten minutes.

Photography.- Messrs Lovewells, Wing and Co. intimate that they have opened the American Photographic Studio in Dee street, near the Carriers Arms, where they are prepared to execute all branches of their air. One specialty of this firm is the issue of miniature pictures at the astonishingly lowprice of 2s 6d per doz. These tiny likenesses are produced on sheets, after the manner of postage stamps, and of about the same size. They are taken on a soft metal plate, prepared for the purpose, and can be clipped off as required. There has been a perfect run for these little pictures in Dunedin and wherever else the artists have visited, and they will no doubt become the rage here also. The accuracy of the likenesses cannot be doubted, and the rapidity with which they are completed is something marvellous. There is no "calling again." Wait ten minutes and you can have them with you, as many as you please.

The American Photo. Company (Messrs Lovewells, Wing, and Co.), announce that they have opened a studio at Mr Bromley's, Ross Place, where they will be prepared for a few days only, to execute gem, sunbeam, and cabinet pictures, in rain or sunshine, at extraordinarily cheap prices.
Tuapeka Times, Volume XIII, Issue 710, 12 February 1881, Page 2

While Messrs Lovewells, Wing and Co. of the American Gem Photographic Company, were in Lawrence, they gave an order for a portable gallery, which was in process of construction at Mr Tolcher's timber yards, last week. Mr Hetherington had the contract, we are informed, and made a very satisfactory job of it. The dimensions of the studio were as follows :- 30ft long, by l0ft wide by by 7ft high. It is constructed in seven sections, and can be put together in four hours, or taken down in two. The company have gone to Balclutha and taken their gallery with them, which they purpose using there.

After finishing in Dunedin they returned Auckland to opening the "American Photographic Studio" on 9 February 1881 in Grey Street. 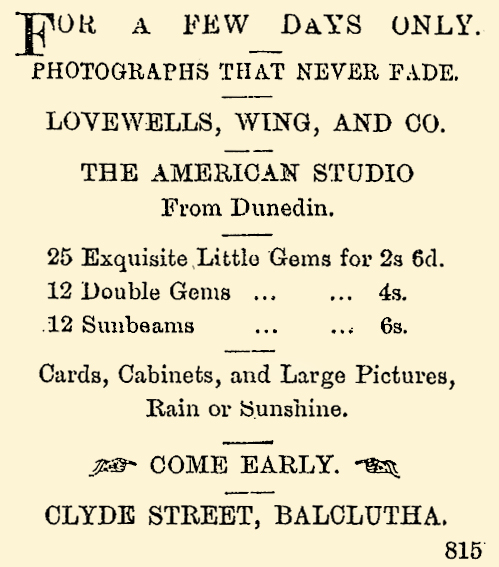 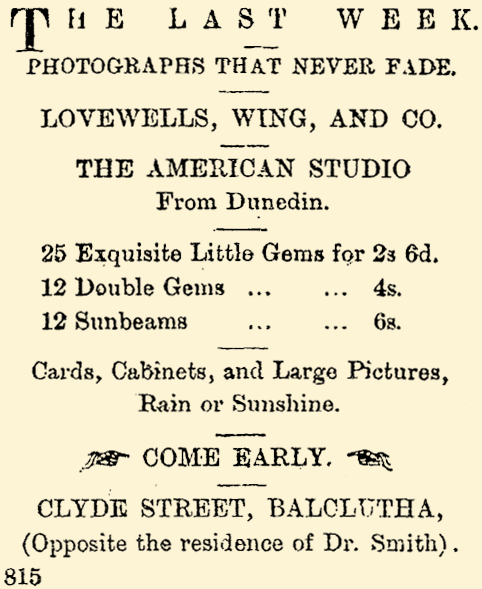 We observe that Messrs Lovewells, Wing, and Co., have erected temporary premises in Clyde-street, where they will take photographs on the American system for a few days. The prices &c, will be found in our advertising columns.
Clutha Leader, Volume VII, Issue 388, 18 March 1881, Page 5

We are requested to mention that Messrs Lovewells, Wing, and Co., photographers, who are at present doing good business in Balclutha, will only remain for a few days longer in the district as they purpose making the tour of New Zealand and their stay in the different townships must necessarily be short.
Clutha Leader, Volume VII, Issue 389, 25 March 1881, Page 4


Cheap Enough, Surely.- The American Gem Photographic Company, Dee street, intimate that two dozen their, miniature likenesses only cost one half-crown. How it can be done will be best ascertained by giving the artist a sitting, those having, any intention of doing so will take notice that the studio will be open only for a short time a very short time, we believe unless sufficient inducement" offers to warrant extension thereof.

In March 1881 they were in Timaru, the local newspaper announced:
Photography. — Messrs Lovewell, Wing and Co., photographers, whose places of business are to be found in the United States, Australia, and in Auckland, have opened a shop in George Street, Timaru. They profess to take good, clear, brilliant pictures, and judging by the beautiful specimen work on exhibition in their window, they have every title to the claim. An advertisement particularising their work will be found in our present issue which will repay perusal. Their studio in Timaru was located in George Street, near the railway station. They operated here until about August 1881 before briefly moving on to Christchurch. The Timaru premises were taken over by the photographer H. Coxhead who after extensive alternations opened for business on 1 September 1881.

In an advert in The Star newspaper of 16 November 1881, Lovewell, Wing & Co. announced that the American Photographic Studio would close for business on Thursday 1 December 1881. They had their photographic "outfit" for sale for 25 pounds and advised that 1,000 pounds could be earned with this camera equipment at the New Zealand International Exhibition that would be held in Christchurch in March 1882.


The representatives of the American Gem Company have temporarily taken those premises formerly occupied by Mr Hjorring, Leven-street, where their studio will be open for a short time. Parties who are anxious to "secure the shadow ere the substance fade" are requested to pay this enterprising firm a visit without delay. The prices charged for portraits can be learnt upon reference to the Company's advertisement appearing elsewhere.