KILLED BY A TRAIN.
INDICATIONS OF SUICIDE,
A horrifying discovery was made by a railway employee at about 5.30 clock this morning, when the body of a man named William Challinor was found on the Waltham Road railway crossing in a terribly mutilated condition.

The deceased had been living with Mrs Boddington, of 53 Whiteleigh Avenue, Lower Riccarton, since last Tuesday, and had arranged to stay for one month. He had been in poor health, and was last seen alive by Mrs Boddington, prior to going to bed last evening. At about 2.30 o'clock this morning the deceased got out of bed, and was subsequently found on the Waltham Road railway crossing. The police were then summoned, and Sergeant Dwan examined the body, and found the deceased's back and left arm broken, and also very serious scalp wounds. He was in a terribly mangled condition, and was quite dead.

The deceased, who was a tea traveller, had been suffering from chronic dyspepsia, and prior to leaving his bed, had left a note stating his intention of doing away with himself. It is believed that deceased was struck by a shunting engine. An inquest will be held at the morgue at 4 o'clock this afternoon.

At an inquest held yesterday afternoon concerning the death of William Challinor, who was found on the Waltham Road railway crossing at an early hour in the morning, the coroner returned a verdict that, deceased was killed by an engine at Waltham Road crossing. There, was no evidence as to how he came to be on the line. 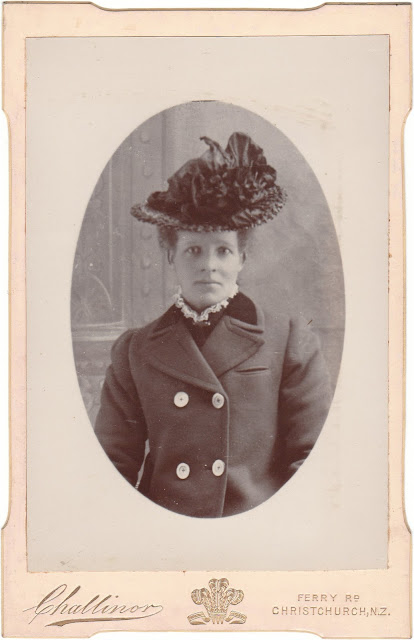 pictured here with the bicycle is my grandfather's uncle, Robert Gudsell (1863-1954) and his wife Maria Margaret Boekenstein who stands by the open gate. Also shown are their sons John Thomas Gudsell (1891-1917) and William Alexander Gudsell (1889-1862) and Maria's sister Alice Boekenstein. John was killed in action during the third battle of Ypres at Passchendaele. (This photograph was copied from the original held by William John Gudsell of Sydney, Australia who died in 1995. The location of the original photograph is now not known).
Posted by Early Canterbury Photography at 1:46 AM