The 1893 electoral roll shows Francis James Olsen, photographer at Westport. Stone's Canterbury, Nelson, Marlborough and Westland Directory of 1906 shows him at Dublin Street, Lyttelton and in 1914 at Jacksons Road, Lyttelton.

Mr F. J. Olsen, photographer, of Invercargill, was in town yesterday in the interests of a syndicate who are trying to float a company to purchase his rights in a patented filter. Mr Olsen had a specimen of the filter with him, and showed it behind the Assembly Rooms. The construction of the filter is rather complicated for description, though not difficult to make, and Invercargill papers, describe prolonged trials of the apparatus as giving satisfactory results with Invercargill water, which is very foul indeed. We saw some clayey water put through the filter, and come through it clear. Mr Olsen went on to Christchurch by the express. - Timaru Herald, Volume LXIV, Issue 3205, 8 March 1900, Page 2. (for more detail on this filter see here)

His son Nelson Clyde Olsen was with the Canterbury Regiment, N.Z.E.F during World War One and was killed in action on 25 July 1917 in Belgium. Frank Olsen was at this time living at Lyall Bay in Wellington. - Commonwealth War Graves.

BANKRUPT PHOTOGRAPHER.
SERIES OF TROUBLES
WELLINGTON, January 17.
"A case of exceptional hardship," remarked the Wellington Official Assignee at a meeting of the creditors of Francis Charles James Olsen, photographer, who attributed his bankruptcy to the Government edict "that photographers were not to be allowed on the wharves, sickness, and the high cost of living.

He was in business in Lyttelton for 15 years. When the 1913 strike came along he received a setback. However, he did his utmost, and had almost recovered when the war broke out. He was accused of being an alien. On one occasoin (sic) he was escorted from a ship at the point of the bayonet; nevertheless, he remained for 12 months at Lyttelton, where, he alleged, he was persecuted from all quarters. The authorities made things so bad he could see that he was done. He then came to Wellington and took over an enterprise which soon lapsed owing to the whole family contracting diphtheria. Later he established a photography business at Ngaio. Again illness took a hand in his fortunes. Following this he started out again, and established a business in the King Country. Then came the influenza epidemic. Up till the time the epidemic broke out he was making good. Bankrupt's financial statement showed assets of the value of £20 and unsecured creditors £171 4s 4d, leaving a deficiency of £151 4s 4d.

Questioned as to his prospects, bankrupt stated that his business had been absolutely ruined as far as the wharves were concerned. He was accused of having, been interred. He had been turned off ships. He had been persecuted right and left ever since the war began.

Asked how he came to be persecuted bankrupt stated that he was said to have been a German, but he was a colonial. His father was a Dane. Religion had also been concerned in his persecution.

The Official Assignee remarked that the case was undoubtedly one of exceptional hardship. There did not appear any chance of bankrupt making an offer.

The creditors present agreed, and the case was adjourned sine die. 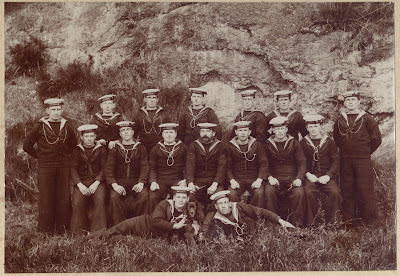 This photograph shows the crew of the HMS Pioneer and it was taken at Lyttelton in May 1911. The vessel departed Lyttelton on 22nd May 1911 so the photo would have been taken some time (a day or two probably before that). The Pioneer was a Royal Navy light cruiser which was based in Sydney as part of the Australasian Squadron. It made regular cruises around New Zealand ports at the time.

HMS Pioneer was a Pelorus-class light cruiser launched at Chatham, Kent in June 1899, by a Miss Andoe. She was transferred to the Royal Australian Navy in 1912 and saw action in World War I against the German cruiser Koenigsberg of the east coast of Africa. She was later laid up in Sydney Harbour as an accommodation Ship, and Scuttled outside Sydney harbour in 1930.