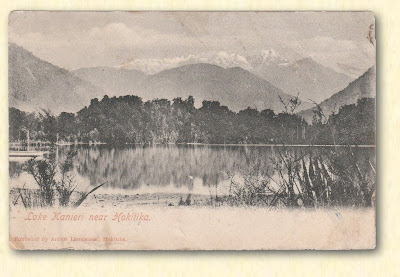 Lake Kanieri, near Hokitika
published by Arthur Linnemann, Hokitika
We have received from Mr Arthur Linnemann a set of illustrated postcards showing a number of West Coast views, which he has just published. The series are illustrative of Westland views principally and Linnemann has shown good judgment in his selection of some of our most charming bits of scenery at Lakes Kanieri and Mahinapua, the Franz Joseph Glacier, etc, etc. The number also include two excellent Southern Alps pictures by Dr Teichelmann. The post cards will make very nice souvenirs for sending to friends at a distance, and being well printed from good photographs they will give the outside public a good idea of the beauty of the West Coast. They may be obtained in assorted packages from Mr A. Linnemann and Mr J. King at a very moderate price, and no doubt there will be a large demand for them. - West Coast Times, Issue 13120, 26 February 1904, Page 2


We have before us a very handsome set of post cards issued by Mr Arthur Linnemann of Hokitika. The views are splendidly re-produced and give a faithful pictures of some of the beauty spots of the Coast. The Arnold River, Lake Kanieri, Coal Creek Falls, Ross Road, Lake Mahinapua, and two ice pictures, Fox Glacier, Waiho River frozen, go to make up a fine selection. - Grey River Argus, 29 February 1904, Page 2 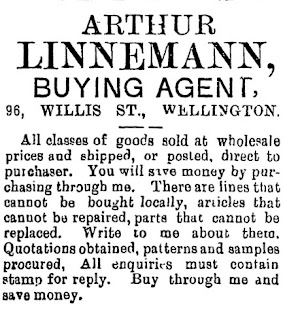 The Cyclopedia of New Zealand
[Nelson, Marlborough & Westland Provincial Districts]
General Merchants.
Linnemann, Carl Johannes Edward, General Merchant, Revell Street, Hokitika. Branches at Stafford, Rimu, and Ross. This business was founded by Mr. Linnemann in the year 1865 at Stafford, and four years later, a branch was opened in Hokitika. A branch was also established at Rimu, where Mr. Linnemann was one of the first to start business, and at Ross in 1899. The premises in Revell Street, Hokitika, and at Stafford are freehold, but the stores at Rimu and Ross are erected on ground held under goldmining licenses. Mr. Linnemann is a direct importer of various classes of goods, including grocery, hardware, crockery, stationery, and fancy goods. He was born in July, 1840, at Hamburg, Germany, where he was educated, and brought up to mercantile life. Mr. Linnemann went to Australia in March, 1860, and was for some time at forest Creek, Victoria. He afterwards came to New Zealand, and went to Dunedin in 1864, where he continued for fifteen months. Mr. Linnemann subsequently removed to Hokitika in the year 1865. As a Freemason, he has been treasurer of the local lodge, and he is also a member of the Royal Arch Chapter of the Order. Mr. Linnemann married a daughter of the late Mr. F. Strien, of Hokitika, in 1866, and has three sons and two daughters.
Posted by Early Canterbury Photography at 3:06 AM