Mr T. Pringle, of Hokitika, started on the 10th of March, to take some photographic views of the country south of the Mikonui. The principal object of the trip was to obtain a faithful picture of the glaciers on the Waiho, Mount Cook. The Ross Guardian reports the return of Mr Pringle, and states that the views reflect the highest credit upon him as a photographer. The first picture shows a general view of the Francis Joseph glacier on the Waiho. The next view is taken from the highest point that can be attained, and the Waiho river is represented rushing underneath the glacier. The third view is the Waiho, about 200 yards from where it opens out. There is also photographer's camp, where the tents were pitched about 600 feet above the level of the sea.
Grey River Argus, Volume X, Issue 843, 10 April 1871, Page 2 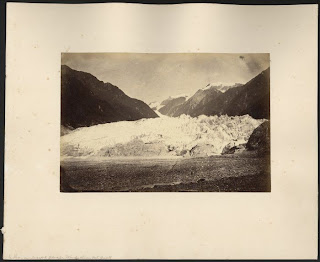 View of the Franz Josef Glacier, with the Waiho River in the foreground, taken ca March 1871 by Thomas Pringle.
Alexander Turnbull Library
Reference Number: PAColl-7075-06-05 Object #42671
This image is commonly accepted as the first known photograph of the Franz Josef Glacier. It was reproduced as a wood engraving in "The official handbook of New Zealand", by Julius Vogel (London, Wyman & Sons, 1875), attributed to a sketch by William Fox. It was attributed to "the late Mr Pringle" in "Geology of the provinces of Canterbury and Westland", by Sir Julius Von Haast (1879) 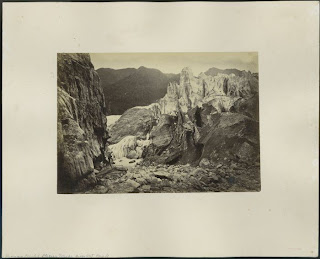 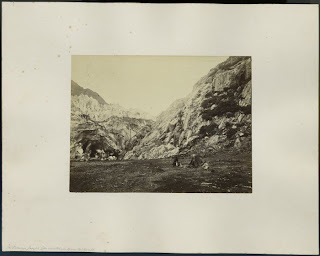 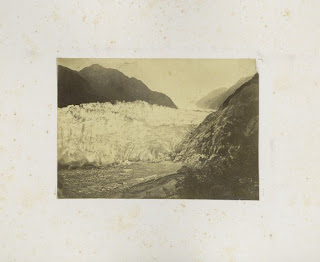 With sincere regret for the death of a good man, much esteemed and respected of all other men, we record the decease of Mr Thomas Pringle, at Donoghue's, in the Ross district, last Friday afternoon. He was one of the early business men located in Hokitika, where he carried on trade for some time before he removed to the Totara. In Hokitika he was ever ready to assist in any movement for the good of his fellow men, and being a Freemason he took an active interest in the formation of a Masonic Lodge here in the early days. He was one of the founders of the Pacific Lodge, and remained a member to the last. More lately, when a Royal Arch Chapter was formed in Hokitika he became a Companion. His funeral, yesterday, was therefore conducted with Masonic ceremonial. The body was removed from Donoghue's in funeral procession early in the morning, and being brought to the Masonic Hall was placed there for the usual exhortations at the death of a brother. The Lodge having been opened in due form, the brethren were called off to assist in the ceremony for which they had assembled. The funeral cortege was headed by a band playing the "Dead March in Saul." The members of the Pacific Lodge (of which the deceased was a member) followed, the entered apprentices first, then the fellow-crafts and then the Master Masons. The Kilwinning Lodge joined with the Pacific Lodge, and the officers of the two lodges followed after the members. These were succeeded by the officers of the District Grand Lodge, the Royal Arch Masons, and the three principals of the Chapter; Companion Lazar, D.G.M., and Past Z, acting as Chief Principal. The hearse followed with four brothers as pallbearers, then the chief mourners, and after them the general public on foot, on horseback, and in carriages. Companion Osborne marshalled the Masonic portion of the procession, which was one of the largest of the kind that has taken place in Hokitika. At the grave, after the church service was performed by the Rev. Mr Kirkland, Mr Lazar read the beautiful Masonic service more impressively than we have ever heard the same service delivered. The brethren then returned in procession to the lodge. We may mention that Mr Hudson, as W.M. of the Pacific Lodge, took a very active part in the Masonic ceremony, and was very ably assisted by his officers. The arrangements for the funeral, otherwise (including the removal of the body from Donoghue's) were conducted by Messrs Ker and Ecclesfleld.

Posted by Early Canterbury Photography at 3:34 AM