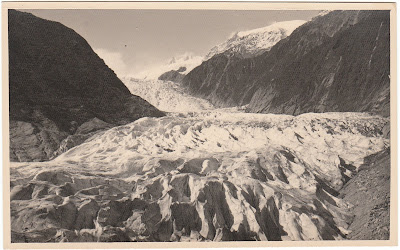 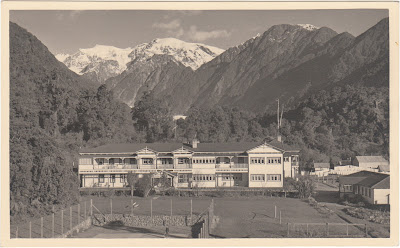 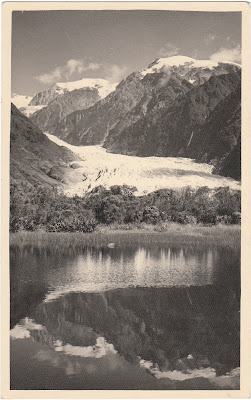 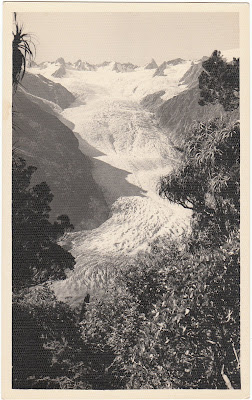 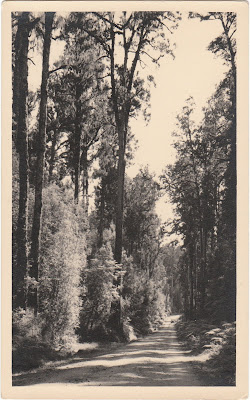 On the way to Glacier 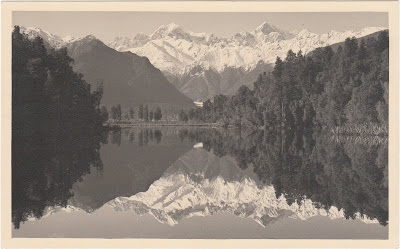 
Obituary. Member of New Zealand Alpine Club: "Mountaineers throughout New Zealand will have learned with deep regret of the death of Mark Lysons. His passing, in the service of his country, so soon after his arrival in Italy, has come as a terrible blow. Many people knew Mark. Some knew him as a guide, others as a photographer; but we in Waiho, and many others too, knew him for what he was - just Mark.

Reared in the shadow of Egmont, Mark early showed his love for the snows. Coming south, he enrolled as a student at Canterbury College, and began making his first trips into our high hills. Among his early climbs he brought off the first winter ascent of Mt. Rolleston via a new route from the head of the Waimakariri Valley, a climb that has not been repeated, although parties have made traverses from the opposite direction.

Before long, Mark found he was to make the decision which was to alter the course of his life. So enamoured with the life had he become that he decided to give up his University career and make Waiho his home. He never had cause to regret it, and mountaineering has been the richer.

In Waiho, Mark was more than just a climber and a photographer. He was our leader in almost everything, and among other activities used to take the services for us in that little church so well known to many. Joining the Army in 1942, he was commissioned as a 2nd Lieutenant, but on embarkation, in January of this year, he reverted to the rank of Temporary Sergeant. Arrived in Italy, his call came too soon." (from the New Zealand Alpine Journal, Vol.X, No.31, June 1944) 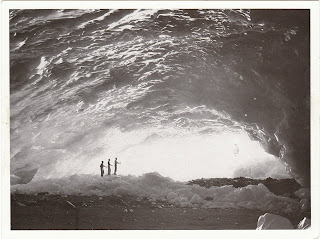 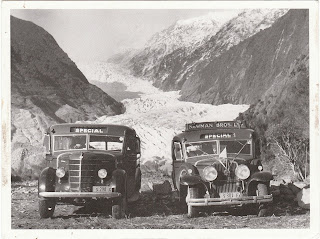 Two photographs by Mark Lysons were use in the book "A Tramper in South Westland" by Elsie K. Morton, November 1951. They show Lake Matheson and the Franz Josef Hotel.

I have a B&W photograph (positive; 8.5" x 6.5" approx) of a man (presumably Charles/Charlie Wollin at a small Hydro Electric station inscribed on the back M. C. Lyons; Waiho Gorge; NZ.

Is someone able to assist verifying location and when taken?

Hello, I have only seen Lyon photographs from the Franz Josef area, so it could be possibly from that area.