The photographer, James Bennie has not been identified, however he may be the Greymouth and later Wellington artist and architect, James Bennie who was born in 1873 and died in 1945. 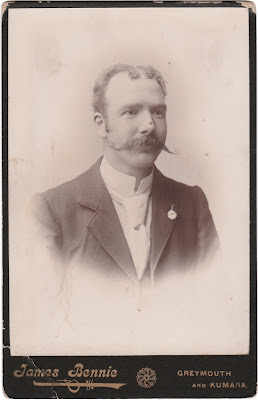 Mr. James Bennie , formerly an Architect, Artist, and Draughtsman, Mackay Street, Greymouuth, was born in Ayrshire, Scotland, in the year 1874, and is a son of the late Mr. James Bennie, of Brunnerton, and at one time an engineer and a mine manager in the south of Scotland. He came out to New Zealand with his parents by the ship “Timaru,” in 1880 (1879), and finished his education in the Working Men's College, Melbourne, where he also studied under Mr. Thomas Searell, the well known Melbourne architect. During the seven years that Mr. Bennie studied under this gentleman he was entrusted with the practical work of the plans and specifications for the Hobart Exhibition, in connection with which he was generally praised as a rising artist, and obtained two gold medals for pen and ink work and water colours. On settling on the West Coast, Mr. Bennie established himself in business as an architectural artist and teacher of painting. Mr. Bennie submitted designs to the postal authorities in Wellington for the new page 568 postage stamps, and although, owing to a slight error in the lettering, they were not accepted, they were praised by the department for their neatness and their delicate colouring. He now (1906) practises his profession in Wellington.

OBITUARY
MR. J. BENNIE
The death occurred suddenly on Saturday of Mr. James Bennie, wellknown architect, of Wellington. Mr. Bennie was born in Scotland and came to New Zealand with his parents when he was five years of age. With the exception of visits to America in 1920 and many visits to Australia, Mr. Bennie has lived in Wellington for over 40 years. He studied his profession in Australia, where he designed the Hobart Exhibition, and upon returning to New Zealand was elected a member of the New Zealand Institute of Architects.

He was responsible for the designs of nearly all the early picture theatres in Wellington and many churches in various parts of the Dominion. In recent years he specialised in the building of blocks of flats.

Mr, Bennie was of a very genial disposition. He was very interested in music, was a great reader and a skilled water-colour artist. He leaves his wife, a daughter of the late Rev. J. R. and Mrs. Clark, a daughter, Miss Marjorie Bennie, and a son, Mr. James Malcolm Bennie, of Wellington, and two grandchildren.
Evening Post, Volume CXXXIX, Issue 89, 16 April 1945, Page 7