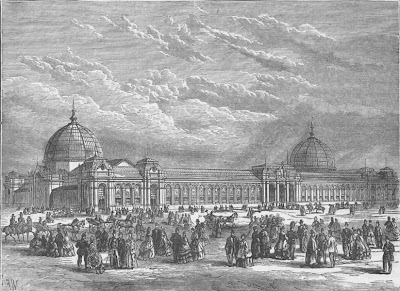 Dr. Barker's photographs exhibited at the Exhibition of 1862, London.

The EXHIBITION of 1862.
(From the Illustrated Times.)

The Exhibition of 1862 may now be regarded as fairly afoot. The guarantee fund has been well filled up; the site of the Exhibition determined on, and the plan of the building decided. The site of the Exhibition is on the space of ground lying south of the Horticultural Gardens at Brompton, and between Cromwell-road, Exhibition-road, and Prince Albert road. The building is of massive proportions, will be 1200 feet long and 700 broad, and it will cover nearly 26 acres. The nave will be 1200 feet long, 85 feet wide, and 100 feet high. The greatest height of the building will be 260, or 100 feet higher than that of 1851. There will be two domes of iron and glass, each 250 feet high, with a base of 160 feet, the largest domes ever built. The building will not be a Crystal Palace, for there will be immense masses of brickwork, and the roofs will be of wood and felt. The architect is Captain Fowke, R.E.

The Exhibition will be opened on the 1st of May by Her Majesty in person. The date for the closing has not yet been finally determined, though, as fogs and damp weather would do much injury to the pictures, no doubt exists that the building will be closed by the 15th October. In the Manchester Exhibition 960 feet length of wall was set apart for modern oil paintings, and 700 feet for water colours. The proposed display will be entirely works of modern artists. With regard to the foreign schools, it is to be left to each country to fix the limitations under which its selections should be made, each being informed of the space allotted to it, and of the understanding that the selection is to be made with a view to exhibit the present condition of the school. With regard to the English school, the committee came to the decision that the collection should include the works of masters who have lived since 1762 so as to take in Hogarth, Hudson, Reynolds, Gainsborough, and Wilson. 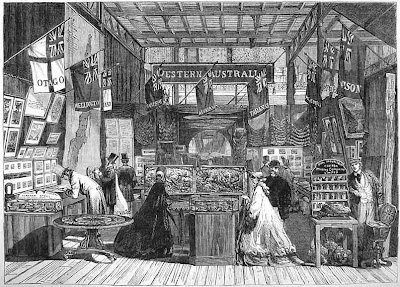 above: the New Zealand Court at the 1862 Exhibition with the Western Australia Court shown in the back ground.

INTERNATIONAL EXHIBITION.
The commissioners for this, province have despatched five cases of Canterbury productions for the great exhibition in London; wool, of course our staple article of production and exportation, being the largest and most important of all the articles sent.

To enumerate these in the order in which they were received and despatched, we may refer first to a beautiful cabinet of fine merino wools, sent-jointly by Messrs. Cookson, Bowler, and Co., and Mr. W. C Beswick, and very carefully sorted by the skilful hands of Mr. Nettleton.

Next, we have an equally beautiful cabinet of wool from the finest merino sheep of Mr. Rich produced by the flock on his run at Moeraki. A third case contained a book of wools from Messrs. Cookson, Bowler, and Co., and Mr. W. C. Beswick jointly; these were also very carefully arranged by Mr. Nettleton, comprising specimens from a large number of the flocks in the province.

The same case contained eleven beautiful photographic views of local scenery by Dr. Barker, comprising pictures of our public buildings and interesting views of hill and dale, mountain and plain in all the diversity of scenery which the country affords.

These three cases were despatched by the December mail, and by the January mail, two other cases were sent, containing additional photographic views from Dr. Barker, two specimens of coal from the Malvern Hills, marked No. 1 and 2, and obtained for the Commissioners by Mr. Haast. Along with these were sent a very handsome pair of boots, manufactured by Mr. W. Adams, boot and shoemaker, High street, Christchurch; these are intended to illustrate the perfection of colonial workmanship in this important branch of industry.
In the same cases were some further specimens of fine merino wools from Alfred Cox, Esq., Timaru, from Francis Jollie, Esq., of the Rangitata, from Miles and Co., and from Cookson, Bowler and Co.

Finally, by the clipper ship Chrysolite which sailed yesterday, a fifth case went containing one three year old fleece of remarkable fineness and great length of staple, shorn from a well bred full mouthed merino ewe, bred by Mr. John McFarlane, the fleece being carefully arranged by Mr. Nettleton. We understand that a small portion of the fleece is now to be seen in Mr. Wilson's seed shop.

The thanks of the province are therefore due to our Commissioners for the manner in which they have discharged their duties. The following letter has been received, showing the safe arrival of the cases first sent to Sydney, and then subsequently despatched to England, where there (sic) will arrive in ample time for the exhibition: —

"Sydney, Jan. 14th, 1862.
"Dear Sir, — I am in receipt of your favour of 6th ult., advising me of the shipment, per Lord Ashley, of three cases to be forwarded to London; they have been shipped, per clipper ship Lochiel, addressed to Commissioners of Exhibition, 1862, care of John Morrison and Co., to whom we have consigned sundry other matters for the Exhibition, calling their particular attention to the items from your province.
I am, dear Sir, yours truly,
John Vine Hall,
General Manager. 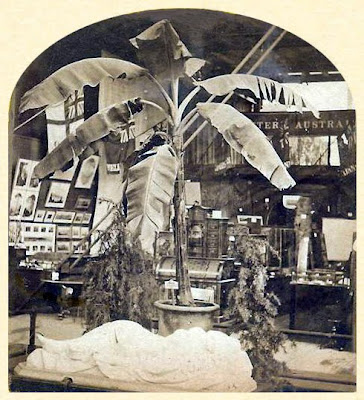 above: the New Zealand Court at the 1862 Exhibition