He was a nephew of Joel Samuel Polack and grandson of Solomon Polack (13), a well-known London Jewish artist. His sister Sarah Polack was married to George Barron Goodman (12), the first professional Australian photographer.

Daguerreotypist in Auckland, New Zealand - May 1848 to August 1848. He visited Otago (or Canterbury) from about 9 October 1850 to December 1850. It is not known if he was working as a daguerreotypists on this second visit to New Zealand.


DAGUERREOTYPE.
MB. G. B. GOODMAN (George Barron Goodman) returns his thanks to the public for the very liberal patronage he has received during the last five years in the above art, and begs to inform them that being engaged in other pursuits he has sold all his interest in the above to Mr. Isaac Polack, who, having for the last three years had all the practice part under his entire management, Mr. G. B. G. can guarantee that he will, in every branch of the art, be as fully competent as himself to carry on the

Mr I. POLACK begs to inform the public, that having engaged the same premises formerly occupied by Mr. G. B. Goodman, will continue the above Art.

Daguerreotype.
Positively the Last Month of the Daguerreotype.
MR. J. POLACK begs to apprise the public that, as he is going to leave the colony in a month, he has reduced his price to one guinea, including case or frame.
Parties desirous of having their likenesses taken, had better avail themselves of the present and only opportunity.


DAGUERREOTYPE.- MR. J. Polack begs to inform the public that he intends remaining in Sydney three months, during which time he will carry on the Daguerreotype at No. 49, Hunter-street, nearly opposite the Union Bank. Price of each portrait one guinea, including a handsome morocco case. 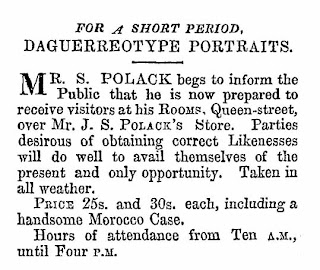 A notice in the New Zealander newspaper also on 13 May shows Polack's name as J. Polack. (5) 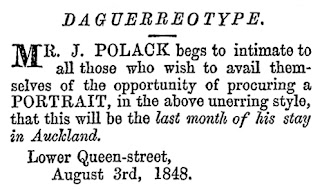 DAGUERREOTYPE.
Mr. J. POLACK having returned to Sydney, will resume the above at his Residence, 49, Hunter-street, opposite Messrs. Flower, Salting, and Co.'s.
Portraits, £1 Is. each, (including case.)


COLOURED DAGUERREOTYPE DRAWINGS.
MR. I. POLACK begs to apprise the public he will recommence the Daguerreotype on Monday, 1st July, with new back grounds, &c. He will insure to those who may favour him with their patronage, a perfect likeness. Portraits 12s.6d. and 17s.6d. each, including a handsome morocco case.
Address, first floor at Mr. Sneil's, Tailor, Bridge-street.
Hours of attendance from ten till three.

On 29 August 1850 he departed Sydney on the barque Santipore for Port Cooper (Lyttelton) via Twofold Bay. (7)

MR. I. POLACK begs to apprise the public he has recommenced the above art, at No. 49, Hunter-street, opposite Messrs. Flower, Salting, and Co's. Portraits 12s. 6d. and one guinea each, including a handsome morocco case.
The Sydney Morning Herald (NSW), Thursday 24 July 1851, page 1


Something "New Under the Sun." We know a recent instance in which Mr Polack so admirably drew the Photographic portrait of a beautiful lady, that, strange as it may appear, her husband absolutely preferred it to the original.

DAGUERREOTYPE. - Yesterday, Mr. Goodman opened for the first time to the public, his gallery for taking portraits according to the invention which has recently created such an extraordinary sensation in England and France. The spot selected by Mr Goodman for his operations is on the leads of the Royal Hotel, where his laboratory has been constructed. We have seen many of the portraits which issued from the laboratory during the week before it was opened to the public, and must certainly acknowledge that the accounts in English newspapers have not been at all exaggerated. The lifenesses are indeed exact, and the sitter is only kept in suspense about half a minute after which a very few minute suffice to the polishing up. and framing the minature. Mr. Goodman has completed some sixty or seventy of these minatures since his apparatus has been in order at the Royal Hotel, and specimens may be seen of many persons well known about the city, which will satisfy any of the incredulous as to the efficiency of the operation. The charge is extremely moderate - a portrait, frame, and case, being less than the cost of a new hat, or a box at the theatre. The Sydney Morning Herald (NSW), Tuesday 13 December 1842, page 2.DIED.On the 2nd of June last (1851), in Paris, after a few days' illness, Mr. George Goodman, late of this city, much respected by all who knew him ; leaving a large family circle in England to deplore their loss. The Sydney Morning Herald (NSW), Saturday 18 October 1851, page 4.

(13) Solomon Polack was born in the Hague, in 1757. He worked in England and Dublin, probably before 1790. He exhibited at the Royal Academy between 1790-1835. Polack died the 30 August, 1839. Miniatures by Polack are included in the collection of the Victoria & Museum, London.

Posted by Early Canterbury Photography at 12:55 AM

This is Isaac Polack and his brother Joel Samuel Polack. They were brothers in law of George Barron Goodman, the first professional Australian photographer. Cheers! Marcel, Brisbane, Australia