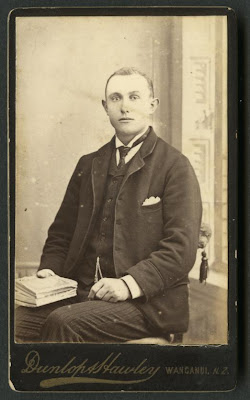 Wanganui Chronicle, Volume XXXIII, Issue 11274, 21 May 1891, Page 3
this notice was repeated in the Wanganui Chronicle until 28 May 1891
It is always a healthy sign when new firms decide to commence operations in a place. The latest in our town is in the photographic line. Messrs Hawley and Dunlop have just started business in premises next to those of Mr Cremer, where the firm have a display of photographs taken by them in other parts of the colony, principally in Christchurch. The cameras used contain all the latest improvements as regards lens and fittings, and as they have gone to considerable expense in preparing a studio with abundant provision for light, they will be in a position to turn out first-class work. The following styles of photograph will be made a speciality "Platinum" and "Bromide Opal," the former of which bears a very close resemblance to a steel engraving and is very effective. The enlargement of small photos will also be included in their business, and as both members of the firm have had considerable experience in the art of photography they will probably gain a fair share of public patronage.
Wanganui Chronicle, Volume XXXIII, Issue 11280, 29 May 1891, Page 2

this notice first appeared in the Wanganui Chronicle on 29 May 1891
Posted by Early Canterbury Photography at 10:32 PM