Colin Ferrier, a 24 -year- old lieutenant, and late of Timaru, was killed in action at Ypres on November 11. His father is a photographer at Timaru and the first intimation he had that the German shell had found a victim in his son was a cable to the effect that "Lieutenant Ferrier, of the Royal Fusileers, was killed by a shell in a dugout at Ypres. Colin had been a lieutenant in the Timaru Territorials previous to his going "Home" to study for his profession of architect. On the outbreak of the war, with the true, patriotic spirit, he joined the Royal Fusileers and went straight into action.
NZ Truth, Issue 513, 17 April 1915, Page 2 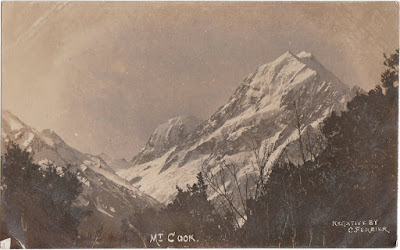 Mr W. Ferrier, of Timaru, writes pointing out that in the list printed in Friday's "Press" of the New Zealanders who are entitled to "the 1914 Star," the name of his son, the late Second-Lieutenant G. C. C. Ferrier was omitted. Lieutenant Ferrier, who was in the 4th Royal Fusiliers, was the first South Canterbury officer to fall in the war; he was killed at Ypres on November 11th, 1914.
Press, Volume LIV, Issue 16139, 18 February 1918, Page 7
Posted by Early Canterbury Photography at 1:55 AM

Hello Jan, do you have a photograph of the saber or sword?

hello Jan, could you please email me at: