“Champagne Charlie.”— A well-executed photograph of this well-known son of Hook - Banner has been taken by Mr H. Chatteris, and is now on view in the window of Mr Fisher, of Hereford street. 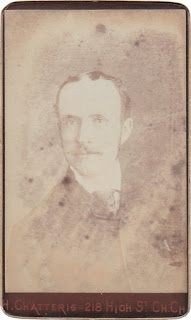 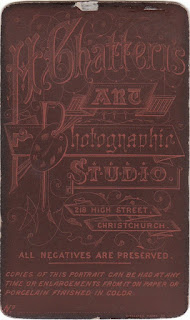 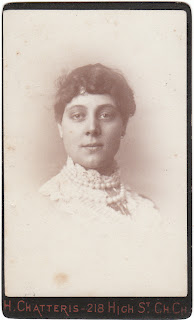 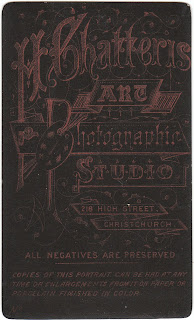 The Exhibition.
...Photography.—(Continued.) The specimens of instantaneous photography shown by Mr H. Chatteris, of Christchurch, exemplify in a high degree the advantages of the process. The portraits of a couple of fine dogs are particularly noticeably the intelligent expression of the faces having been admirably caught. The other photographs are clear, and of a fairly good tone. Mr Chatteris also shows some fine specimens of English work, in the shape of portraits, taken by the aid of the electric light...
Lyttelton Times, Volume LVII, Issue 6641, 10 June 1882

Having received an invitation from Mr H. Chatteris, I viewed a number of noted greyhounds that he has painted, viz., Azamat, Seafield, Seadrift, Gladstone, and Master McGrath. He has also on the way Queen, Cliquot and Box. They are all oil paintings, and those completed are in Alhambra frames. The likenesses of all are perfect, and any one who knew the dogs would name them at a glance. They arc certainly well done, and Mr Chatteris deserves great credit for their proficiency and finish.
Press, Volume XL, Issue 5792, 5 April 1884


Mr. Henry Chatteris's studio, at 218, High street, opposite the Triangle, is one of the places in Christchurch which it is worth a visitor's while to visit. Mr. Chatteris was formerly in Mr. J. E. Mayall's studio in London, and there gained the experience which enables him to produce the beautiful specimens of photographic art in portrait and scenery with which the walls and show-cases of his studio abound.

His suite of rooms comprise handsomely-furnished waiting and ante-rooms, the studio (33 feet by 18 feet), a dark room, a printing room, and an office. For his pictures he uses the new dried plates, and his rooms are filled with all the most improved latest appliances for taking and printing pictures. He makes a specialty of his enlargement of portraits by a new process, and certainly, judging by the specimens of his work which adorn his rooms—one of the late Rev. Mr. Buller (died 1884) in particular,—his success in this direction seems to be very great.

Another kind of work to which he gives special attention is portraits on porcelain, coloured for hanging against windows which thereby act as beautifully soft transparencies. Mr. Chatteris has also introduced small miniature photographs, admirably adapted for portraits of children, and these are done at a remarkably low figure. One thing cannot but strike the visitor to Mr. Chatteris's rooms, namely, that the work which he turns out is all of a first-class kind, and that to the minutest details he shows considerable taste and skill in the way in which his photographs are finished and mounted.


Gamble & Co. operated from this address in 1886 and were replaced by Standish and Preece soon afterwards. 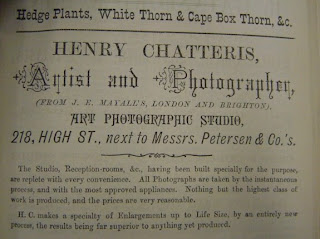 from The Southern Provinces Almanac 1885 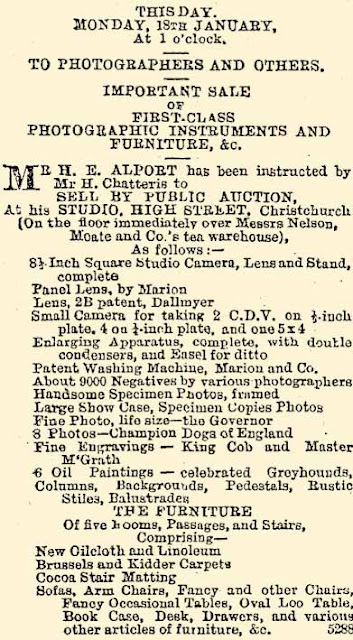 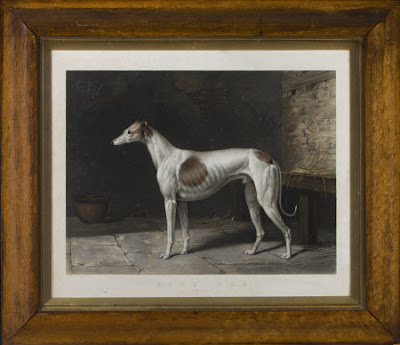 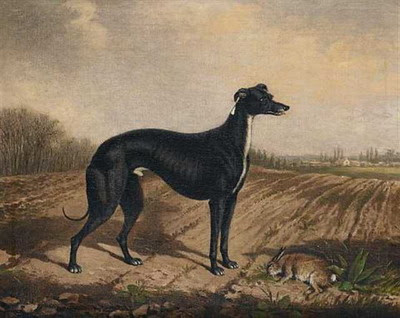