The Patriotic Sports — We have been shown a number of views — fifteen in all — of the incidents of the Patriotic Sports gathering by Messrs Halma and Co., which are extremely interesting, apart from their value as records, while one showing Mr McLachlan addressing the crowd, is an admirable picture. We understand that Merrs (sic) Halma and Co. have undertaken to give twenty five per cent of any money received from the sale of these pictures to the Patriotic Fund, and as they are priced at the low figure of two shillings each, Messrs Halma and Co. may reasonably expect to sell a good many pictures.
Ashburton Guardian, Volume XXI, Issue 5030, 3 February 1900, Page 2


Five Hundred Portraits. — We have received from Messrs Halma and Co. a copy of a photograph taken by them of the children and teachers at the afternoon tea given to the Borough School on Wednesday last by Mrs Hugo Friedlander. There were about five hundred of the young people present, and every face can be recognised. The picture is certainly an admirable one.
Ashburton Guardian, Volume XXI, Issue 5252, 3 November 1900, Page 2 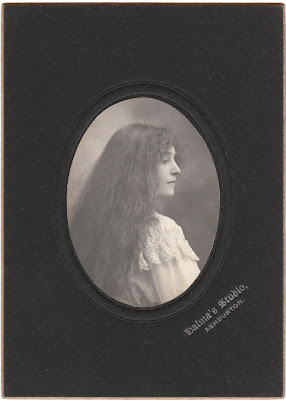 Excellent Photography — The photographic group taken in the Domain of Mr and Mrs Fooks' golden wedding party, by Messrs Halma and Co is now completed and reflects great credit upon the photographers. In all over 120 figures are included placed in five rows, and each person comes out with exceptional distinctness. Considering the large number in the group the photograph is one of the best that has come under our notice.


Danger Signal — An admirable picture of the imported stallion Danger Signal has been forwarded to this office by Messrs Halma and Co, the local photographers. It was taken last week when the horse was in Ashburton, and gives a capital idea of this very fine animal. It will be seen that the criticism of one of our Christchurch contemporaries that he was somewhat leggy is at variance with fact, for a better proportioned horse could not be found. The photograph it on view at the studio of Messrs Halma and Co, and those who had not an opportunity of seeing Danger Signal when he was in Ashburton should have a look at it.


Volunteering.— The khaki uniforms, for the Guards have arrived, and the corps will parade for the first time in them tonight. The uniform is very neat, with green facings. —Messrs Halma and Co, have presented the Ashburton Guards with an enlarged photo of all the members who took part in the musical march on June 6th in their different uniforms. The photo will be hung in the orderly room, and is now on view in Messrs Oates, Lowry and Co's window.


Works of Art — The large frame containing photographs of the officers and committee of the Ashburton Club is now hanging in one of the rooms of that institution, and is much admired by visitors and others. It is by Messrs Halma and Co, of East Street, and does credit to the establishment.


Portraits to the Fallen
— Portraits of the late Troopers Stephens and Bruce and Corporal Upton have been executed at Halma's Studios to the order of the War Fund Committee, and have been hung in the Reading Room of the Public Library.

Presentation.
After the inspection parade of the Ashburton Guards last evening, a presentation was made to the Company of an enlarged photograph of Capt. Tucker, which was executed at Halma and Co.'s studio, Saunders' Buildings. The picture is a faithful representation of the young officer, and is enclosed in a handsome black and gold frame, with a dark back ground, which, lends additional attractiveness to the picture itself. Altogether it is a work of art, and does credit to the studio from whence it came. The light and shade is excellent, the photograph standing out in bold relief, with the officer in an easy posture, and the features clearly represented in every particular. The picture was given to the Company by Messrs Halma and Co. and is undoubtedly the best-work of the kind that has been done here.

Captain Nicoll, in making the presentation, read a letter from Messrs Halma and Co. in which they trusted that the picture would be an acceptable gift from the firm. The presentation was greeted with hearty applause from the members of the Company present.

Captain Nicoll then took occasion to present the Company with, an enlarged photograph of the late Trooper Basil Stephens, and in doing so, referred briefly to the deceased trooper, who although not killed in action, still met his death nobly. Captain Nicoll also spoke in eulogistic terms of the way in which Trooper Stephens had attended to his duties when a member of the corps. It gave him (the Captain) much pleasure to present the Company with the portrait.

This picture was also executed at the studio of Messrs Halma and Co., and is an excellent representation of the late Trooper Stephens.
Ashburton Guardian, Volume xxi, Issue 5711, 15 July 1902, Page 2


Messrs Halma and Co. announce that they are still executing one dozen Cabinet photos and one enlargement for 15s. The best work is guaranteed, samples of which may be inspected in the vestibule of the studio.
Ashburton Guardian, Volume xxi, Issue 5793, 20 October 1902, Page 2


Messrs Halma and Co, photographers, Saunders' Buildings, return thanks for the patronage bestowed on them during the past three years, and announce that during the present month (November) they will do one dozen enamelled photos and one enlargement for 12s 6d. The work will be executed in their usual high class style.
Ashburton Guardian, Volume xxi, Issue 5803, 1 November 1902, Page 2


"...On Monday next the pupils of the upper standards of the Hampstead School will be photographed in exercise by Mr Ryan, of Halma and Co..."
Ashburton Guardian, Volume XXI, Issue 5929, 2 April 1903, Page 3


A social was held at the Baring Square Wesleyan Church last evening...During the evening Miss Minnie Baker, on behalf of the Young Women's Bible Class, presented Mrs Kingston, their late teacher, with a very handsome enlarged photograph of the class. Mrs Kingston, who has, through indisposition, been obliged to resign her charge, will cherish this thoughtfull (sic) expression of their love. Mrs Kingston, in a few words, thanked the girls. The picture is the work of Mr Ryan, of Halma and Co.
Ashburton Guardian, Volume XXI, Issue 5993, 19 June 1903, Page 2


During the present month Messrs Halma and Company, photographers, Saunders' Buildings, are giving one dozen cabinets and enlargement, framed complete, for l8s 6d. They are also doing cabinet photos from 10s per dozen.Inspection of the work in the studio is cordially invited.
Ashburton Guardian, Volume XXXI, Issue 6134, 2 December 1903, Page 2

To the attention of those who desire to present their friends with a tastefully executed portrait we may recommend the work of the Halma Studio in East street where a very large and excellent photograph is on view representing the Ashburton Mounted Rifles on parade in Hagley Park. A fine photograph may be seen of the golden wedding party of Mr Ede, and our representative was shown a beautiful specimen of photography done by the fashionable platinotype process. The studios doing a very large business in enlargements, on which a remarkable concession is made when ordered with a dozen cabinets.
Ashburton Guardian, Volume XXI, Issue 6152, 23 December 1903, Page 2

The Latest Novelty — In view of the great and widespread interest which is being taken at the present day in the collection of post cards, it is interesting to learn that Messrs Halma and Co. are giving free one dozen postcard portraits to all purchasers of one dozen photos. We have seen a sample of the free postcard portraits and can recommend them as a work of art. There is no doubt that Messrs Halma's offer will be extensively taken advantage of.
Ashburton Guardian, Volume xxviii, Issue 6855, 24 April 1906, Page 2


PUBLIC NOTICES.
Mr A. A. RYAN, HALMA'S STUDIOS,
announces that he has sold his business to MR J G Killoh.

He wishes to give thanks to all his Ashburton and County clients, for their patronage during the last 21 years, and hopes that a loyal continuance will be given to his successor. A. A. Ryan. Signed under Power of Attorney — O. J. Chivers.

In regard to the above notice, I beg to intimate that the business will still be carried on under the old name of Halma and Co., and that the studio will be under the management of Mr W. Greer, who for the past ten years, has been operator for Mr Ryan.

Mr Greer is well-known as a first-class photographer, and clients can rely on all work entrusted to him being done in a thoroughly artistic and satisfactory manner.

Negatives for the past 21 years have been retained, from which orders can be executed at any time. Your patronage is cordially solicited.

We have been shewn, by Mr C. G. Carter, a number of very pleasing photographs of the various places of interest in the Rotorua District, taken since the Tarawera eruption. These include views of Ohinemutu, Wairoa, Tikitapu Bush, Lake Tarawera, Hazard's House, McRae's Hotel, etc., etc. In all numbering 20 distinct pictures. The work has been executed by Mr A. A. Ryan, Sydney, and Mr Carter has been entrusted with the sale of the photographs. Mr Philp has been appointed to canvass for orders and no doubt will be successful in his efforts. As the San Francisco mail leaves here on Saturday, the public will have a good opportunity of forwarding to the Old Country, pictures of the recent catastrophe. 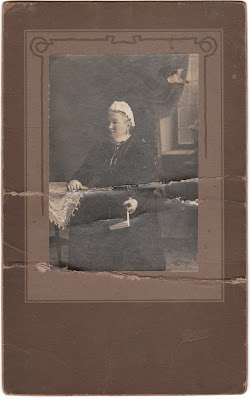 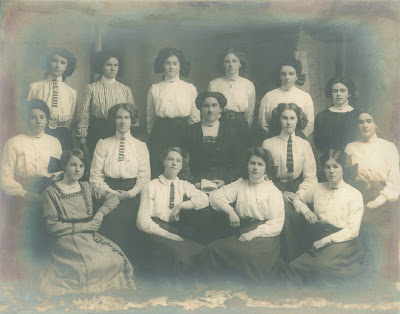 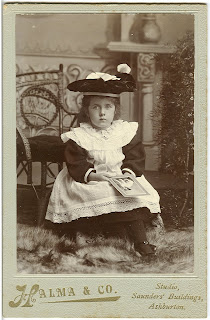 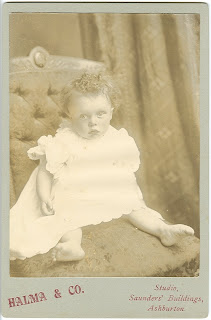 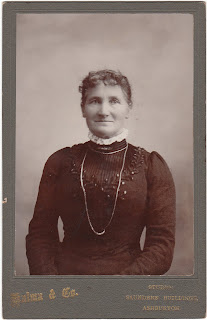 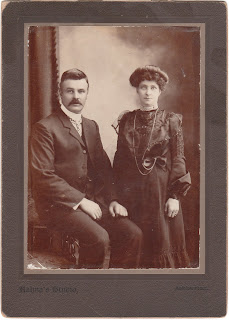 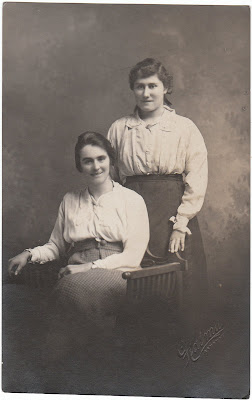 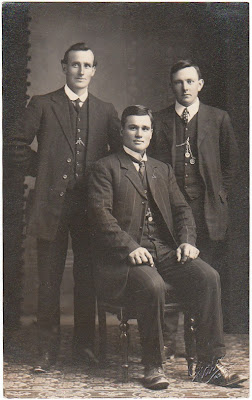 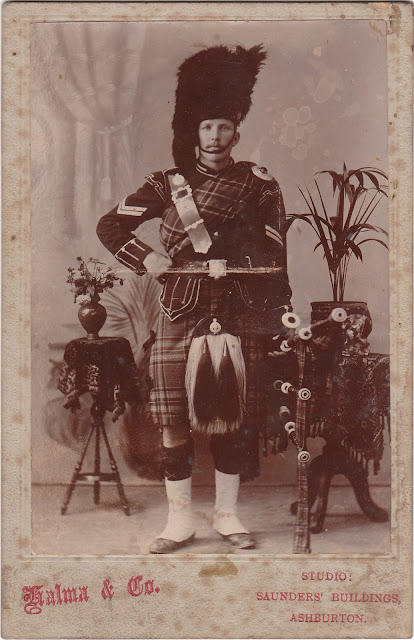 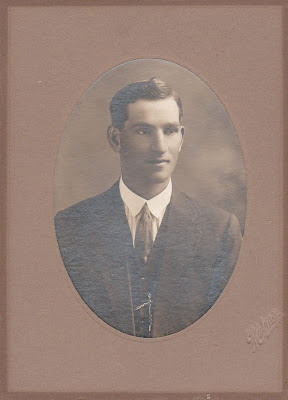 Posted by Early Canterbury Photography at 2:10 AM

But I am told it is no relation to chapman family
Family relation are Harper, Patterson Chapman
Was this a postcard that was sold or individual personal photo
Hope this helps
Alison Hurley