The two very handsome shops in Mawhera Quay being built by Messrs De Berry and Sweetman, builders, to the order of Mr Taylor, are now very nearly finished. The building is divided into shops raised on concrete foundations and floored with matai. The building is 70ft. deep by 33ft. wide and has walls of 14ft. The large shop room is the full depth of the building and is from 20 to 28ft. wide. The small shop is occupied by Mr Rose, photographer, and is in every way adapted for that class of business, as a large skylight gives ample light. This fine new building is a great improvement to the town and the spirited proprietor deserves credit for his enterprise.


By an advertisement in another column Mr J Rose, well known in and around Greymouth, announces that he has started business on his own account as photographer, and solicits a fair share of patronage. His line of 12 cabinets and one enlarged photo for 17s 6d is a great inducement, and no doubt the people of Greymouth and surrounding district will avail themselves of the opportunity of getting cheap pictures. Mr Rose is a general favorite and will doubtless do well in his business, and the quality of his work is of a high order.


Attention is directed to the business announcement of Mr J Rose, photographer, who has removed to the establishment next to Kettle Bros, where he is prepared to undertake all kinds of photography. His line of a dozen cabinets and enlargement for 17s 6d will no doubt be taken full advantage of. 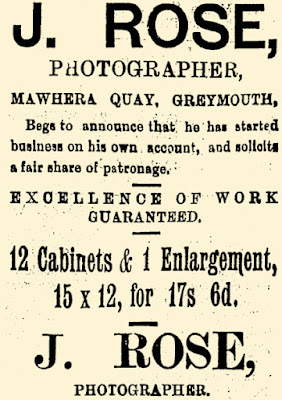 It is not known if the Mr Rose referred to here is Joseph Rose, the photographer.
In accordance with instructions issued by Mr T. B. Donne of the Tourist Department, Guides Clark and Graham have opened up a new climbing route between the head of the Tasman glacier and Lake Tekapo. Guide Clark has forwarded the following telegram, giving his experience: — "According to instructions, Graham and I made new Alpine passes from head of Tasman glacier to Tekapo. I got Mr Rose to accompany us with his camera, and he managed to secure some excellent photographic results. We crossed the Tasman saddle (8000 ft. high) thence traversed to the head basin of the Murchison. The pass is 7250 ft in height. We went down the steep and broken ice-face of Classen glacier to Godley valley, returning by the Ohau gorges and the Miller glacier to the Hermitage.


On Saturday early, a fire resulted in Penny s Palace Restaurant being completely burnt down, also Hallenstein's Clothing Factory, and Nottle's adjoining was badly damaged and the stock ruined. Rose photographer, was seriously damaged. Lawson's shoe shop's brick wall saved the fire from spreading up the town. Lawson's stock and window were somewhat damaged. The insurances were as follows Lawson: £2000 on the premises and £3,500 on the stock, and Nettle £350 on the stock. The Penny's had a narrow escape from burning.

The death took place suddenly last evening of Mr Joseph Rose, of Derby Street, Westport. The late Mr Rose was associated for several years with Mr J. Ring (Mawhera Quay, Greymouth), in the photography business. About 25 years ago he was engaged by Mr Vincent, a photographer of Palmerston Street, Westport, and later. bought out the business.

He married Miss Hamilton, a daughter of Mr and Mrs W. Hamilton, of Marsden Road. Deceased was about 55 years of age, and enjoyed good health, and his sudden demise was a painful shock to relatives and friends. He was feeding his fowls when he suddenly collapsed, and before medical aid could be sought, he expired.

He leaves a widow and family. Mr W. Rose, of Greymouth, is a brother of deceased. He was a well-known member of the Westport Bowling Club and Secretary for a number  of years, taking part in most of the West Coast Tournaments. He skipped the winning rink at Greymouth  two years ago.
Hokitika Guardian, 23 August 1929 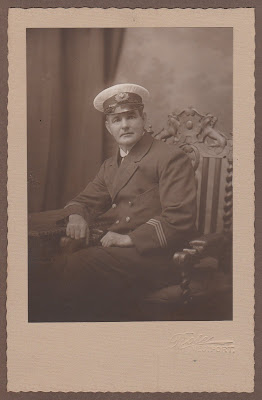 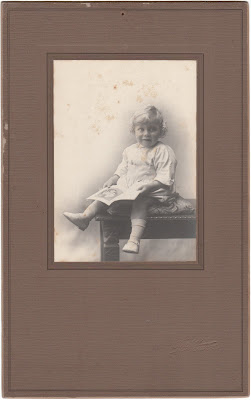 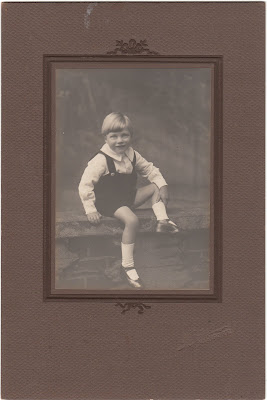 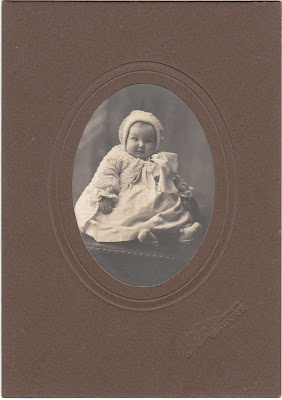 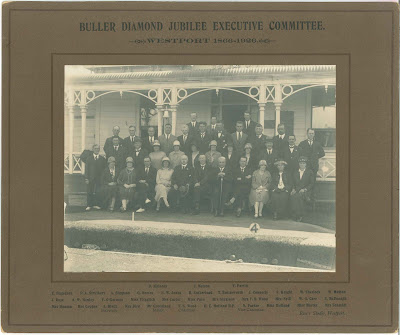 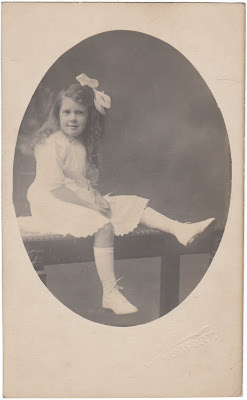 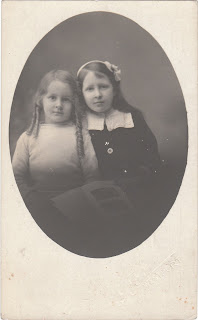 above - "Aunty Chris
From Phyl & Roma" 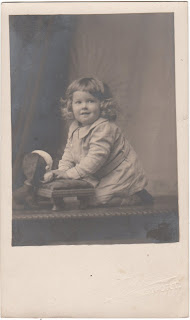 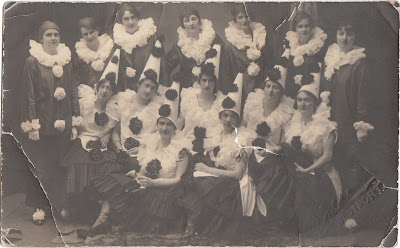 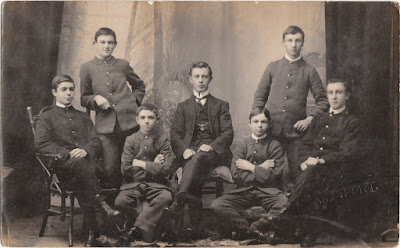