He came to New Zealand by the ship “Caribou” which arrived at Port Chalmers on 13 January 1867.

Once upon a time, not so very long since either, Port Chalmers possessed a performing doggie, well known as "Photo," and owned by Mr De Maus, photographer, of that town. Photo was a canny tyke, rough-haired and crop-eared, and many a time and oft has he delighted the juveniles, aye, and children of larger growth too, by his quaint performances in public. Poor Photo, however, is no more; he has gone to the other side of Jordan, and by way of keeping him in remembrance, that is, if it were possible to forget a doggie of so many good parts, his whilom master has divided his body with the worms by retaining the head, which has been very artistically stuffed and preserved by Mr J. Lees, of the Port, who, we may remark en passant, is a taxidermist of no mean ability.
Otago Witness, Issue 1164, 21 March 1874, Page 16


Since Mr De Maus, the Exhibition (New Zealand and South Seas Exhibition - 1889) photographer, has opened his studio, some few of the season ticket holders have paid him a visit to have the portrait taken, which, according to the regulations, must be pasted on every admission card.
Otago Witness, Issue 969, 15 August 1889, Page 13

The death is announced of Mr David Alexander de Maus, a well-known resident of Port Chalmers for many years. Born in Edinburgh (census indicates England), he came to New Zealand in the gold rush days, going to the West Coast. Afterwards he established a photographer's business at Port Chalmers, where he settled. He took an active interest in public affairs at Port Chalmers, and was Mayor, during the South African War period. Mr De Maus represented Port Chalmers for a number of years on the Otago Harbour Board. - Press, Volume LXI, Issue 18438, 20 July 1925, Page

DE MAUS TOPS THE AVERAGES AT REPRESENTATIVE MATCHES.
Herbert De Maus, this year's leading cricketer, is nigh on twenty-three years old, is two yards and two inches' in height, and is a genial and popular fellow. He was born in Levuka, Fiji, and when a youngster was sent to Edinburgh, where the ground work of his education was laid. Still a boy he came to New Zealand in 1882, and started commercial life in the office of the Lyttelton Times, with which firm he is still connected. De Maus learned his cricket entirely in New Zealand. He joined the Lancaster Park Club, Christchurch, about eight years ago, and rapidly advanced to senior ranks under the tuition of the Hon. E. O. J. Stevens and Mr. A. M. Ollivier, two famous Canterbury reps. Possessing enormous reach and plenty of confidence, De Maus renders nugatory many a breaking ball that would be fatal to less resolute batsmen. His favourite stroke is between point and cover, but he is strong in all departments, and undoubtedly stands to-day first and foremost amongst New Zealand cracks. Against the first N.S.W. team he compiled 88, he and Wilding making a meritorious stand at a critical period. He has rendered yeoman service to his club, and has scored consistently in all representative matches. So highly were his talents valued that effort were made by appreciative Canterbury supporters to secure him a place in the last Australian Eleven, but unfortunately the negotiations were fruitless. His recent performance against the second N.S.W. team, where he played a magnificent innings for 118, set the seal on his fame, and induced the highest eulogistic opinions from such capable judges as Mr. Coleman Davis, and the leading members of his team. In all representative matches for this season he has an average of 50, being by far the highest in the Colony. It may safely be affirmed that no Australian Eleven is complete without De Maus. As a bowler he is, on a wicket that suits him, extremely dangerous, and in style and method somewhat resembles Ashbolt. Gentlemanly, unassuming, and a thorough enthusiast, he is the beau-ideal of a popular hero. At the inevitable social his vocal abilities are always in request ; for deep rolling nautical songs he is not to be surpassed.
Fair Play, Volume I, Issue 21, 1 May 1894, Page 18 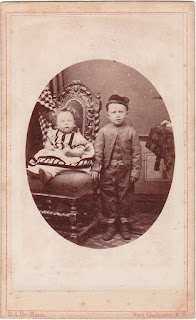 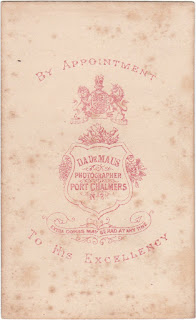 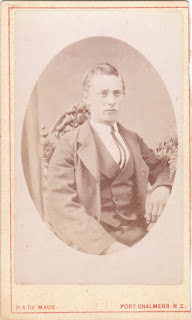 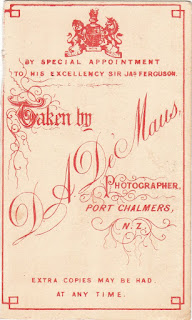 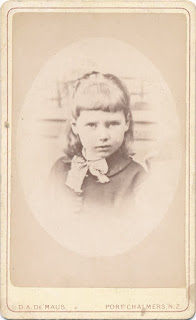 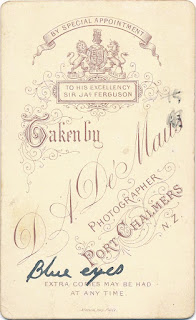 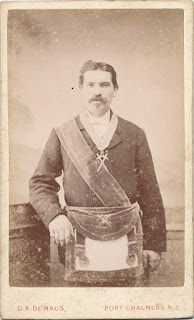 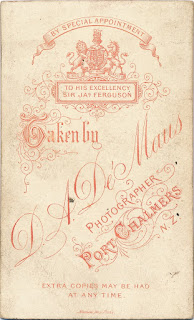 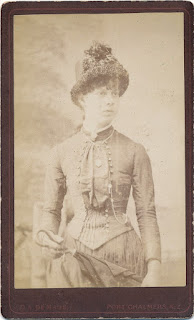 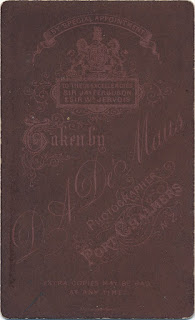 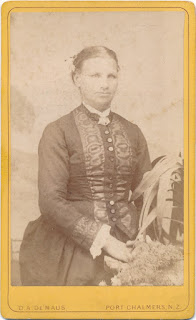 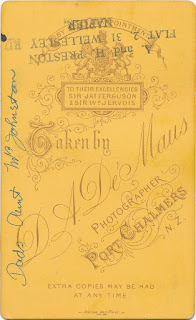 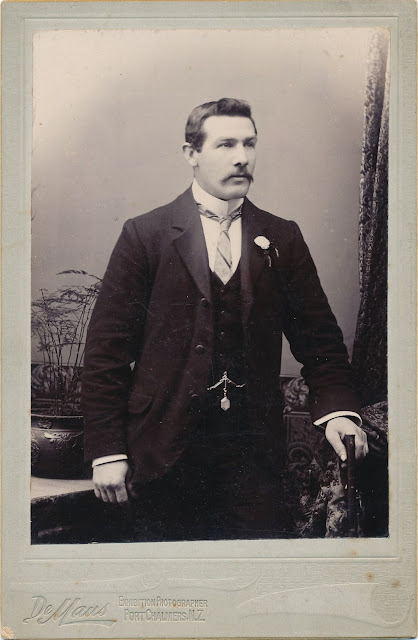 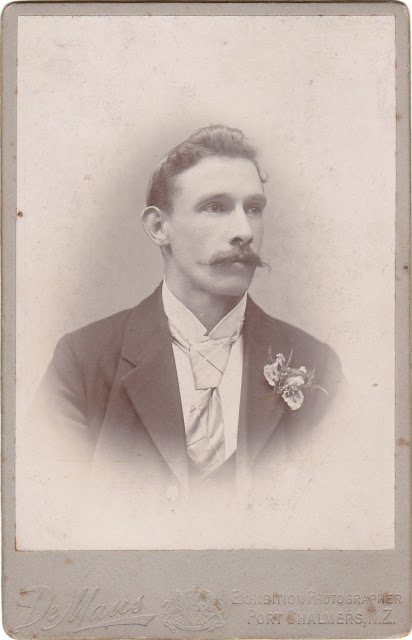 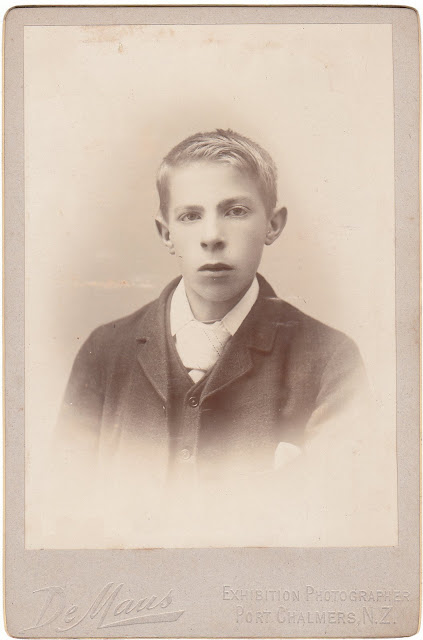 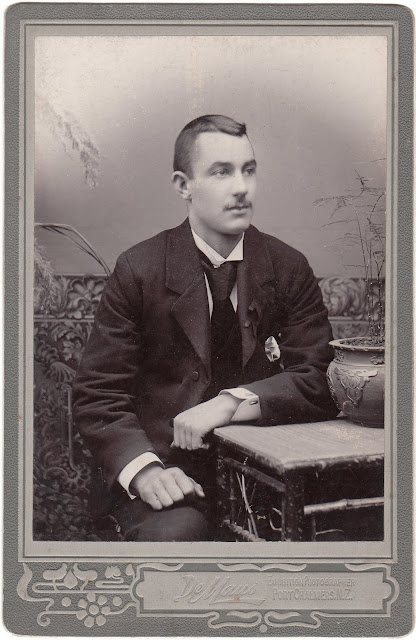 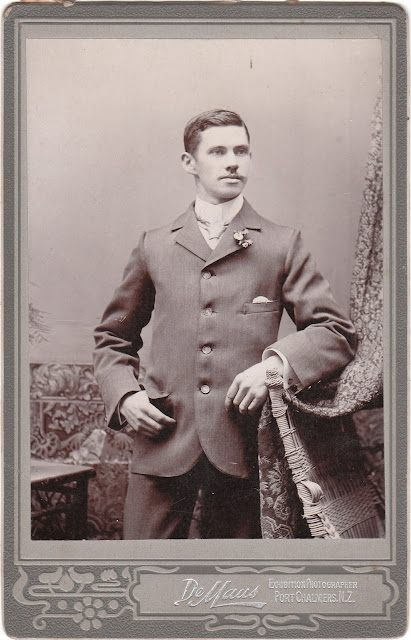 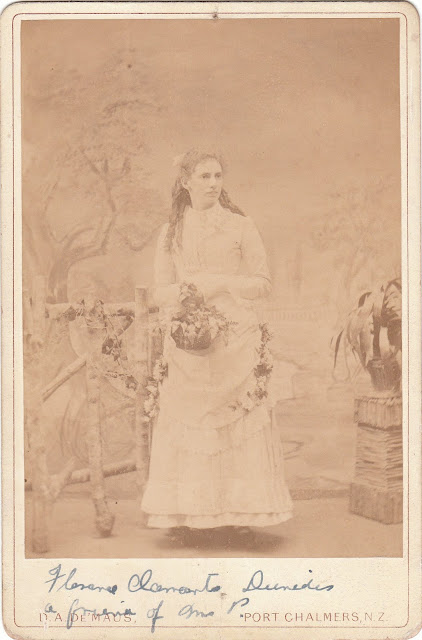 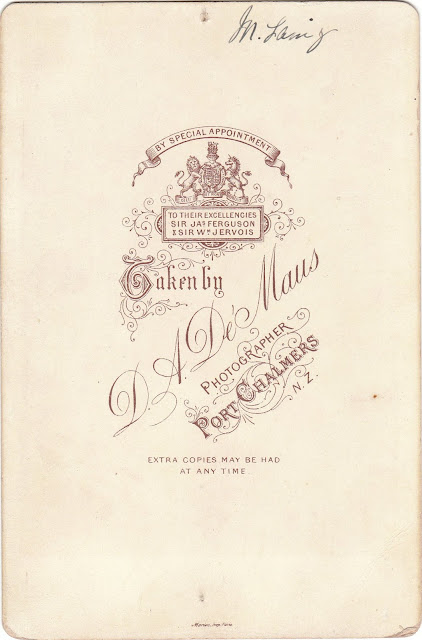 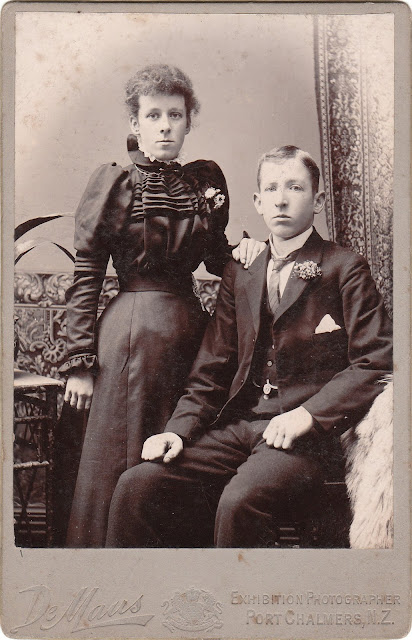 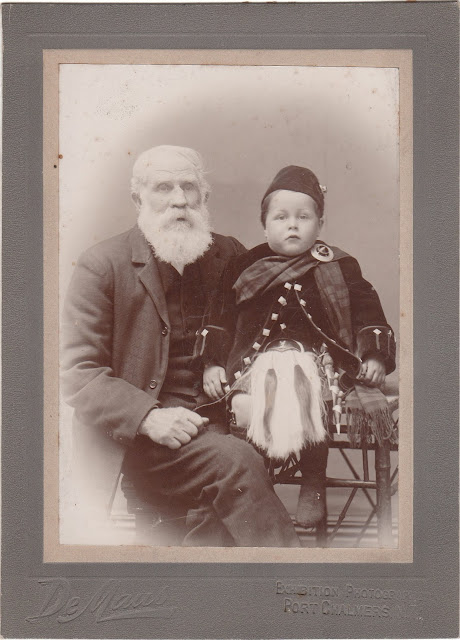 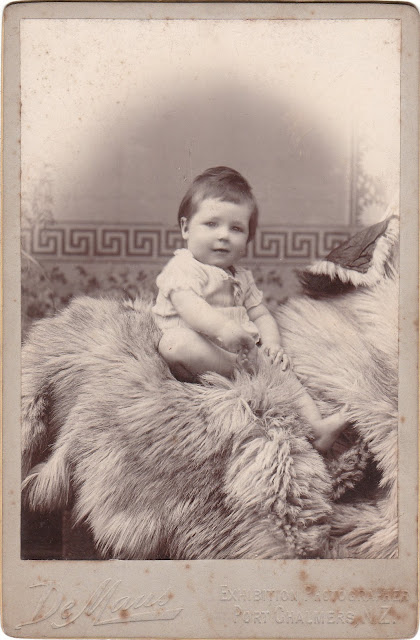 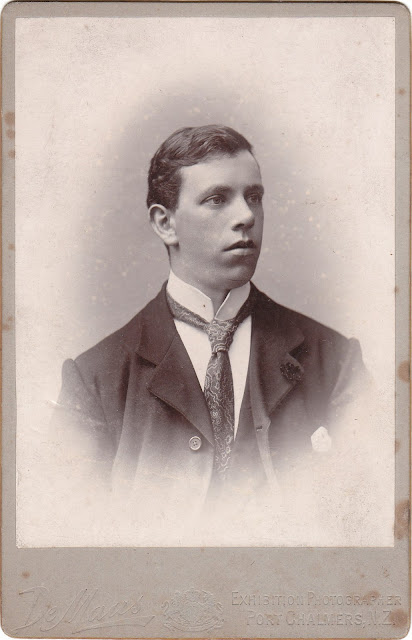 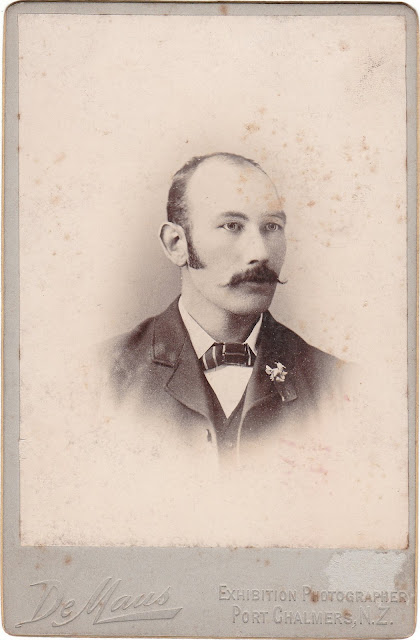 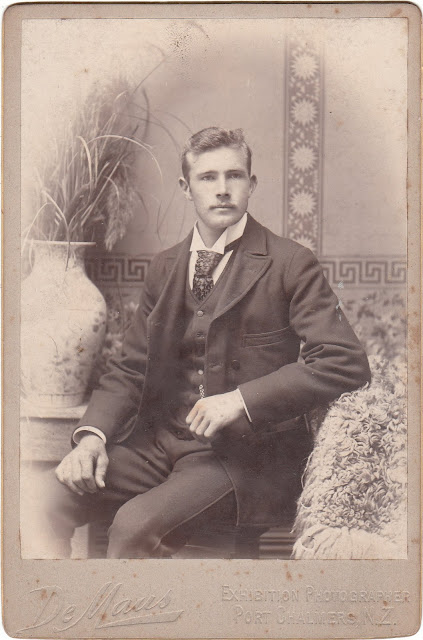 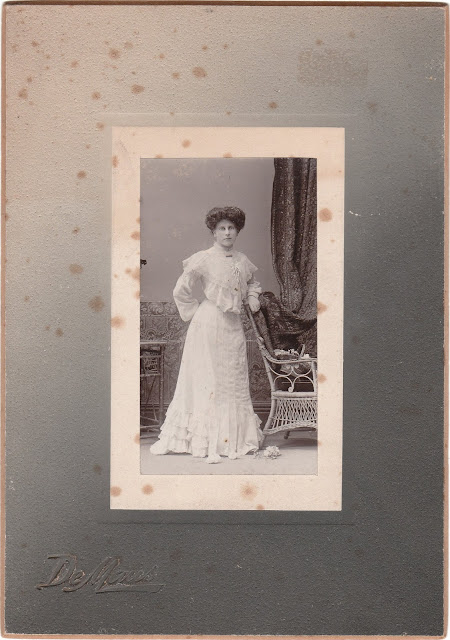 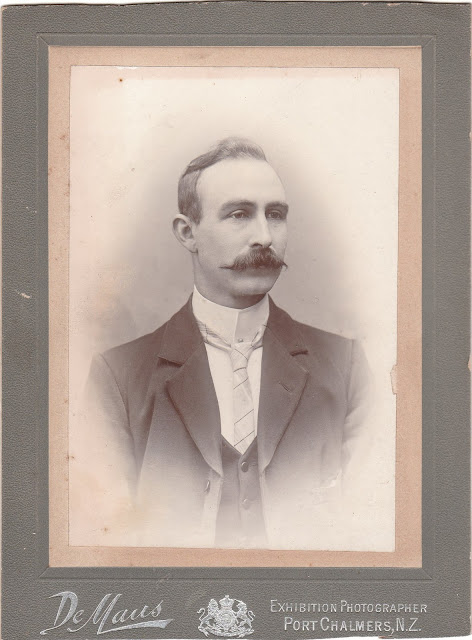 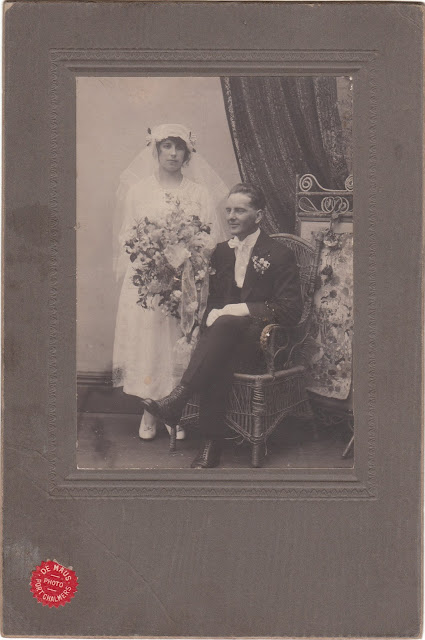 Hi Tony, I was pleased to see this feature on De Maus as a cdv by his brother James De Maus was one of the first NZ ones I purchased for my collection. I can add info for your biography and have a number of certificates which I will email to you. Keep up the good work. Cheers! Marcel Safier, Brisbane, Australia.

I enjoyed reading your article on David De Maus and little on his brother, James. Are the photos depicted actual photos of David as a young man and then as a grown man or are they just unidentified photos taken by David De Maus?
I cannot find out what became of Annie De Maus ( nee Buchan).I wonder why she is not buried with David at Port Chalmers.
James De Maus was extremely unfortunate in that his Studio was totally destroyed in the Great Fire in Princes Street Dunedin in April 1867. He never financially recovered from that and facing Bankruptcy, went to Levuka, Fiji in late 1869. Dufty Brothers had the photographic market there and James De Maus instead became a Publican at the Commercial Hotel. He died in 1872 suddenly. Poison wad suspected and an autopsy was carried out with inconclusive results. A sad end to such a promising beginning. Regards,Mark Hamilton, Adelaide SA

Hello Mark, thank you for your comments about David and James De Maus. The photos are of unknown people taken in De Maus' studio they are not on David himself. I have now re-arranged the page to avoid that confusion.

There are a couple of De Maus photographs for sale on TradeMe at the moment - www.trademe.co.nz