Braham La Mert was a partner in the Christchurch studio of Mundy and La Mert with Daniel Louis Mundy, this studio was established in High Street about 1865. On 7 August 1865 La Mert arrived at Hokitika on the p.s "New Zealand" sailing from from Dunedin, Lyttelton and Nelson. In September 1865 a branch of Mundy and La Mert was opened in Camp Street, Hokitika next to the Bank of New South Wales. La Mert appears to have run this branch. However on 13 December 1865 the partnership with Mundy was dissolved by mutual consent with La Mert taking over the assets in Hokitika and Mundy those in Christchurch. Three days later La Mert's furniture, bedding and stock-in-trade was advertised for sale at auction in Hokitika due to non payment of rent. The photographic studio having a street frontage of 30 feet was auctioned on 18 January 1866, the vendor being Thomas Jackson. In July 1866 he is a passenger on the "Moravian" sailing from Victoria to London.

He later appears to have gone to South America; on his return to England in 1873 a series of engravings were published in The Graphic newspaper based on his photographs of the Amazon.

The following engravings are taken from a series of photographs taken by Braham La Mert about 1872. 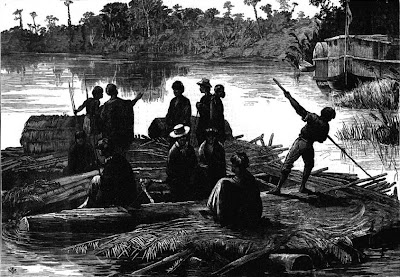 Kokohamas Indians floating down stream on a "Balsa," or raft.
In the distance appears the Peruvian steamer "Tambo".
The Graphic (London, England), Saturday, March 1, 1873; Issue 170 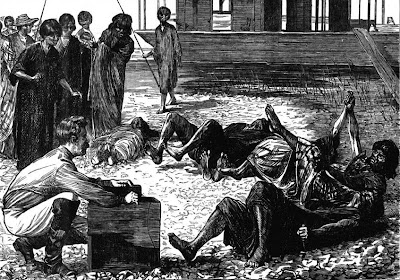 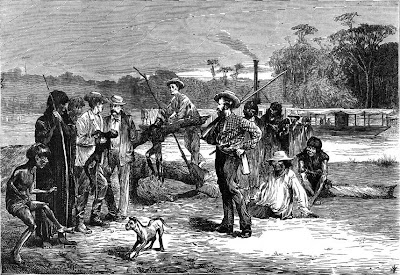 In England in 1883 he was charged along with his brother John La Mert and four or five others with conspiracy to defraud Arthur Henry Clarke Jervoise of £40,000.

The 1891 census shows him at 7 Arthur Street, Holborn, London. He is unmarried, aged 49 years and his occupation or profession is shown as "living on own means."

The 1901 census shows him at 35 Store Street, Holborn, London, he is a boarder at the house of Charles Potter. He was then aged 58 years, his occupation or profession is shown again as "living on own means."

PHOTOGRAPHY.
Mr. B. LA MERT, of the firm of Mundy and La Mert, of Christchurch, formerly of Dunedin, begs to intimate to tho public of Hokitika that having completed his promises in Camp street, next to tho Bank of New South Wales, that, he is now prepared to execute PHOTOGRAPHS of every variety, at reasonable charges. Business hours 10 till 4. - West Coast Times , Issue 53, 5 October 1865, Page 3


NOTICE OF DISSOLUTION OF CO-PARTNERSHIP.
NOTICE is hereby given that, by Deed, dated the Twelfth day of December, One thousand eight hundred and sixty-five, the Co-partnership hitherto subsisting between us, the underrsigned Daniel Louis Mundy and Braham La'Mert, at Christchurch and Hokitika, under the style or firm of " Mundy and La'Mert," Photographers, was dissolved by mutual consent as from the said date.
The stock and effects of the late firm, which are at Hokitika, have been assigned to the said Braham La'Mert, who is to receive all debts owing to, and pay all debts owing by, the said late firm, which have been incurred at that place.

The stock and effects of the late firm which are in Christchurch have been assigned to the said Daniel Louis Mundy, who is to receive all debts owing to, and to pay all debts owing by, the said late firm, save those above mentioned. Witness our hands this 13th day of December, 1865.
D. L. Mundy,
B. La'Mert.
Witness — Thos. I. Joynt, - Solicitor, Christchurch. - West Coast Times , Issue 88, 28 December 1865, Page 3

family
Posted by Early Canterbury Photography at 12:33 AM