We now append a list of those in the Grey district who either, won prizes or obtained honorable mention:— The first on the list is Mr W. H. Leech, photographer, who has been awarded a silver medal for the best twenty photographic views of the West Coast scenery. These are especially good, and embrace the whole of the Coast, some of them being from Inangahua and the Lyell.
Grey River Argus, Volume XIV, Issue 1718, 5 February 1874, Page 2 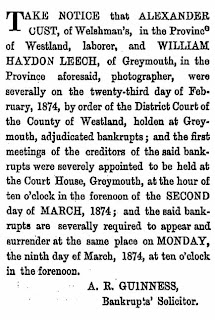 Snow up Country.— A correspondent writes:— The snow in the Molesworth, Tarndale, and Clarence districts is heavier and more continuous this season than has been known for some years. There is from three to five feet in many parts of the Clarence country, and the Acheron Valley is also very bad, but Tarndale itself has less snow than any of its approaches, and there had been no traffic between that station and the Molesworth for three weeks.

Mr Robertson, Manager of Molesworth with Mr W. Haydon Leech, alpine photographer, started last Thursday morning to see what it was like. There were some heavy drifts to pass through, and the greater part of the way it was simply ploughing through the deep snow.

It took the whole day to accomplish the distance. Although in the upper Alma Valley and around Tarndale the snow was lighter, the frosts had been much harder, and the ice and frozen ground was one of the worst features of the journey. Crossing one ice-bound patch, after cutting a variety of figures Mr Leech and his horse took a gentle roll together, the horse falling on his rider's leg, but they both scrambled up again somehow, too intent on the good fare awaiting both man and beast at the homestead heaving in sight to think of anything else, and at which they arrived just before dark.

As Mr Robertson thought the weather too doubtful they returned the next day, and since then there has been another heavy full of snow.
Marlborough Express, Volume XXII, Issue 158, 7 July 1886, Page 2

Mr W. H. Leech, alpine photographer reached Reefton yesterday, after a prolonged journey through the interior of the Blenheim and Marlborough districts. His album contains a very choice collection of mountain scenery illustrative of the natural beauty and grandeur of one of perhaps the least known portions of the Island. Mr Leech is to be complimented on the result of his trip.
Inangahua Times, Volume XI, Issue 1798, 22 December 1886, Page 2 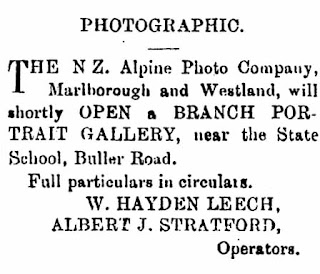 Deceased was in bed at the time, and the attention of those in the house was drawn by hearing groans proceeding from the bedroom, and on going in they found deceased passing away. Drs Andrew and Roberts were called, but deceased was beyond all aid. He had been in ill-health for a good time, and was for a while in the Nelson Hospital.

Deceased was 65 years of age, and was a photographer in Nelson a good many years ago, when he was well known, and much respected. An inquest will be held this afternoon at two o'clock.
Colonist, Volume XLIV, Issue 10068, 28 March 1901, Page 2

Inquest.— Yesterday afternoon an inquest was held at the Courthouse before Mr H. W. Robinson, Coroner, and the following; jurors— J, Morley (foreman), J. A. Louis, T. Hinchcliffe, E. W. Brown, C. H. Manning, and John Henman, on the body of the late W. Haydon Leech, who had died suddenly in Washington Valley on the previous day.

Mrs Emily Jane Brooker stated that deceased came to stay a while at their house after he came out of the Hospital. He used to complain of pains under his heart and in his back. On Wednesday morning she heard him groaning, and went into his bedroom to see what was the matter. She found him vomiting blood. He exclaimed "God heave mercy," and expired almost immediately. Dr Roberts stated he was called to see deceased, but on arrival he found deceased dead. He saw a large quantity of blood deceased had vomited. The post mortem examination disclosed aneurism of the aorta, which had burst. The aneurism was of long standing. The death was a purely natural one. A verdict in accordance with the medical evidence was returned.
Colonist, Volume XLIV, Issue 10078, 10 April 1901, Page 1

Posted by Early Canterbury Photography at 12:00 AM

William Haydon Lawley Leech born 28 Dec 1841 to Edward Leech, Surgeon and his wife Elizabeth nee Waine. As far as we can work out he came to NZ on the "Frenchman" in 1860 to Auckland. He served in the Maori Wars. William Haydon Leech serving with the Colonial Defence Force,
Wellington (Troop), from 15/9/1863-11/3/1864.
He then next appears in Nelson 9 months before me marries in Nov 1868. (From Intention to Marry records he states he has been in Nelson for 9 months)

I have 2 pictures of him if you would like them.

I forgot to add He was born on 28 Dec 1841 in Hertfordshire - Sawbridgeworth is where they resided before coming back to Poland Street, London in early 1842 where he was registered. He attended Midhurst Grammar School in Sussex when it was at its height of popularity leaving approx 1858 or 9. He is supposed to have gone to University and have an M.A but i don't know if this was true.

Hello Jo, thank you very much for the information about William Leech, I'm very pleased to have it. I would certainly like to have the photos of him, it has been very hard to find any photographs of the photographers themselves.
Regards
Tony