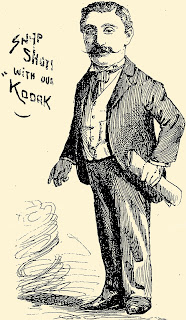 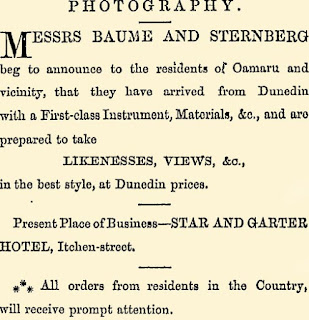 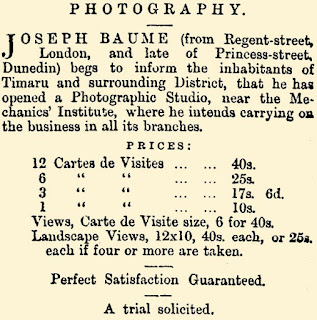 
We call attention to the intimation that Messrs, Baume and Sternberg, photographers, are now ready to take portraits at the Star and Garter Hotel.
North Otago Times, Volume III, Issue 47, 12 January 1865, Page 2

Messrs. Baume and Sternberg, photographers, advertise that their stay here will only continue for another week. It is well known that Messrs. Baume and Sternberg's portraits are very superior, and they now intimate that they are taking pictures by the newly invented sennotype process, at a reduction of 25 per cent, below Dunedin prices.
North Otago Times, Volume III, Issue 50, 2 February 1865, Page 2


We learn from Messrs Baume and Steinberg's advertisement, that they have decided on remaining for another week. Their portraits of some of those residing here, testify to their success in the photographic art.
North Otago Times, Volume III, Issue 52, 16 February 1865, Page 2


Photographic Views. Mr. H. Parker, of the Waitaki, was summoned by a travelling photographer, named Joseph Baume, to recover the sum of £22 155., for taking a number of photographic views of his station and scenery around it. The plaintiff produced the views in Court, and stated that they had been ordered by defendant and his brother. The defendant objected to some of the views as they were badly finished, and stated that he had only ordered one of each. A witness was called and proved that the views were all well taken, with the exception of two. The defendant was ordered to pay £22 and costs. Mr. Perry appeared for the plaintiff.
Timaru Herald, Volume II, Issue 64, 5 August 1865, Page 5


Photography. — We observe by advertisement that Mr. Baume has opened a Photographic Studio, and as his pictures are well taken, we have no doubt he will profit by his visit to Timaru.
Timaru Herald, Volume II, Issue 66, 19 August 1865, Page 4


Hartley v. Baume. Debt, £5 15s. Alleged to be due by defendant to plaintiff, for goods supplied and work done. Mr. Perry appeared for defendant.

W. H. Hartley, sworn: One day I was in conversation with Mr. Baume, who told me he would like to have a background painted. I told him I could do it, and we agreed it should be done for a dozen cartes de visites. It was to be like the panelling of a room, on rollers. I painted it, and he seemed very much pleased with it. A short time afterwards he sent for me and told me it had been left outside in rough weather, and got damaged. I painted it over again.

Afterwards, I made him, at his own request, a pedestal, about four feet high, with a vase on top, for which I charged him £3 10s. On presenting my account he refused to pay.

Cross examined by Mr. Perry: I did not receive the cartes de visites in total payment for the work. The painting got damaged through rough weather, and was done over again in consequence; and not on account of my bad painting.

By the Court: Mr. Durand was near when the agreement was made.

John Rankin and Joseph Dockrill considered the pedestal worth from £1 10s. to £2.

For the defence, Mr. Perry called Joseph Baume, who stated: Plaintiff asked him to take some photographs of him (plaintiff), which he did, and also some of Mrs. Vercoe. Plaintiff took them away and did not pay for them. The agreement as to payment was work for work, as he (defendant) wanted a background and other things done.

Cross-questioned by plaintiff: You said you would take it out in work. The background was not finished before pedestal was ordered.

By Mr. Perry: The value of portraits I took for plaintiff is £2 10s.

By the Court: I did not have the whole of the background repainted — only part of it.

Henry Durand, sworn: I overheard conversation between plaintiff and defendant. I heard Hartley was to do some work for Baume, who was to take some portraits of him as payment.

James Smith stated: I was asked by defendant to see a pedestal and background. He did not say who made it. I consider whole of carpenter's work to be worth about 30s.

Wmn. Knight deposed to having been called in by defendant to examine some paint work done. He pointed out a pedestal and background. It was not done in a workmanlike manner. The fair value of the painting as done was about 7s. 6d. He would have charged 15s. if done properly. By the Court: The background did not look damaged. The work seemed badly done. T. W. Fyfe also deposed to value of painting, if properly done, at 15s; as it is now it is not worth anything.

F. J. Wilson stated Hartley had told him he was to paint background and make a pedestal for Baume, and that he was to take it out in pictures. Case dismissed with costs.
Timaru Herald, Volume II, Issue 72, 30 September 1865, Page 3


Sennotype Pictures.— We have seen some really beautifully executed sennotype pictures by Mr. Baume, of Timaru; and for a view of these pictures alone, his Studio is well worthy of a visit. The peculiarity of this process is the beautiful softness, as well as relief of the pictures. The body appears to rise from the flat surface and stand out, presenting an appearance as though modelled in porcelain or ivory; the features are also brought out with stereoscopic effect, and the likeness rendered quite astonishing.
Timaru Herald, Volume II, Issue 75, 21 October 1865, Page 4