Mahan and Muir
Timaru and Oamaru 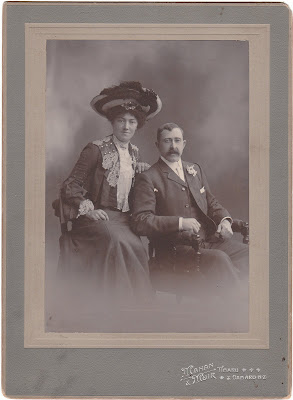 The studio curtains, backdrop and cane chair are also shown in a Mahan and Halford photograph taken in Timaru. It is believed therefore that this photograph is from their Timaru studio. 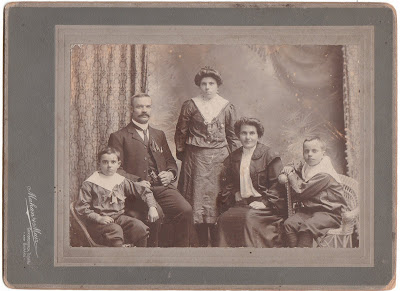 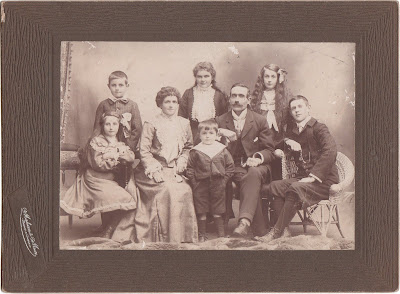 The Cyclopedia of New Zealand
[Otago & Southland Provincial Districts]
Major Robert Mahan, who is on the staff of No. 3 Battalion, Otago Rifles, has had a long experience as a volunteer. He served five years in the Timaru Artillery Cadets, and joined the Oamaru Rifles as a private in 1882, on his arrival in the district. Shortly afterwards he gained the rank of sergeant. At the time of the Russian scare Mr. Mahan transferred to the Naval Artillery, and was soon afterwards elected sublieutenant. Two years later he became lieutenant-commanding, and afterwards had charge of the corps. He is a son of Mr. A. Mahan, schoolmaster, Geraldine, and was born in 1862, in County Longford, Ireland. After completing his elementary education he learned the business of a photographer, and has been well-known in Oamaru since 1886. He is referred to in another article in connection with the firm of Mahan and Muir, photographers.


The Cyclopedia of New Zealand [Canterbury Provincial District
Mr. Archibald Mahan, Old Colonist, was born in Carigallan, County Leitrim, Ireland, in 1834. He was educated in Dublin, and brought up in the teaching profession. After his college course he went to County Longford, where he taught for fifteen years. While there he married Miss Cody. Mr. and Mrs Mahan arrived at Lyttelton, by the first trip of the “Duke of Edinburgh,” in 1874. After teaching for a short time in the Main School, in Timaru, Mr. Mahan went to Waitohi Flat, where he opened the local public school. He was teaching in South Canterbury for twenty-five years, within a radius of twenty-five miles from Timaru. Mr. and Mrs Mahan had fourteen children, eight sons and six daughters, eleven of whom are living. Mr. Mahan retired from the teaching profession in 1899 and started farming on the Rangitata, where he remained until his death in April, 1901.
Posted by Early Canterbury Photography at 2:30 AM