born at Tumai in Otago, New Zealand, on 9 May 1878
daughter of John Channing Buckland and his wife Caroline Fairburn
died on 8 June 1939 on board the "Tamaroa" in the South Pacific Ocean when returning to New Zealand from England. She was buried at sea. 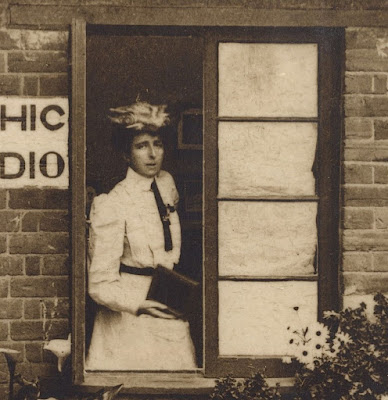 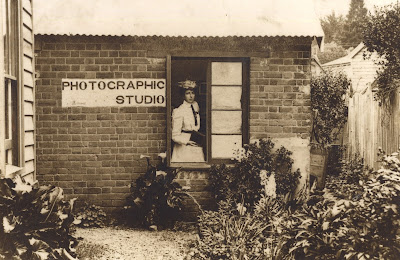 Miss J. Buckland has her studio in the building adjoining Mr Munro's premises on Beach Road prepared for the reception of sitters. Miss Buckland's work is well enough known to need no recommendation from us, and no doubt she will meet with the support she deserves. 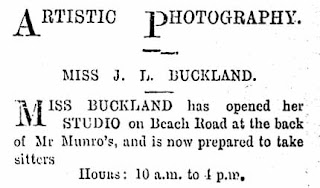 
Photographic — Miss J. L. Buckland was fortunate enough to secure first prize in a photographic competition held by the Auckland "Weekly Herald." The competitors were asked to send in a collection of not less than six views or studies, one condition being that photographs must not have been published previously. The result of the competition speaks very highly for the standard of work produced by Miss Buckland. 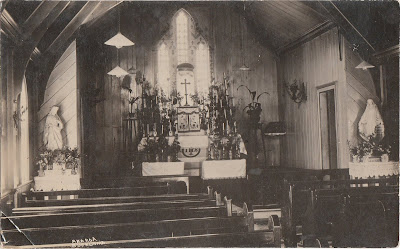 The interior of an Akaroa Church by Jessie Buckland 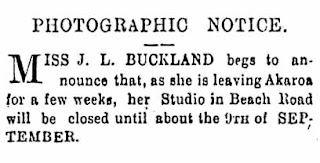 
Obituary
An early colonist, passed away in the person of Mr John Channing Buckland, who died at his residence "The Glen," Akaroa, on Sunday last. Mr Buckland has been ailing upwards of a year from the illness which resulted in his death.

Before coming to Akaroa he had taken a prominent part in public affairs, and, in answer to a request, became a member of the Akaroa County Council, on which body he represented the Wainui Riding up to last November. Mr Buckland was a very able man indeed, having a great width of interests. He was a representative of the best type of early colonists.

Mr John Channing Buckland was a son of Mr W. T. Buckland, and was born in Auckland in 1844. He was educated at Dr Kinder's Grammar School, and St John's College where be gained a scholarship, which he held for four years. Mr Buckland took an active part in the war in Waikato, serving with Colonel Nixon's force of mounted volunteers. At the close of the war be went to England, and on his return in 1867 settled at Otatuhu near Auckland.

After a few years he moved to Otago, living near Waikouaiti, and afterwards at Taieri Lake Station. Mr Buckland remained there till 1899 when he sold out and in 1902 he removed to "The Glen," Akaroa. He has since bought the Mount Bossu Estate, on Akaroa Harbour.

In 1867 Mr Buckland married a daughter of the Rev. William Fairburn, of Auckland, and his wife, four sons and three daughters survive him.

Praise of Akaroa
The Hon. Thomas Mackenzie, who recently visited Akaroa, replied in the following terms to the Town Clerk, who sent on the views of Akaroa for the Tourist Department, and also some negatives of the best views of Akaroa and neighbourhood:- "Your favour of 21st inst. to hand. Permit me to thank you very sincerely, and through you Miss Buckland and Messrs T E Taylor and Co for the very handsome present you are sending and for the use of the negatives, I shall be glad to comply with the request contained in your letter, and, as I said before, will also see that they are well exhibited and that views will appear in some of our weeklies of your very charming town. As I said on the occasion of my recent pleasant visit there, it is the most up to date town of its size that I have ever been in, and I wish its people every success" 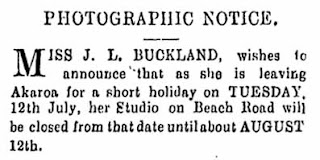 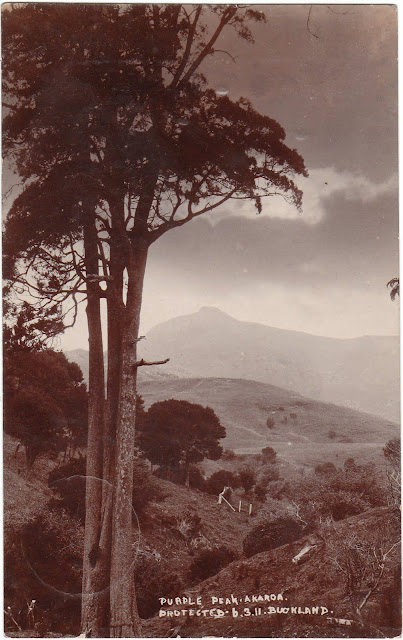 Purple Peak, Akaroa
Protected 6.3.11 Buckland
"Bruce Hotel, Akaroa 11th Nov - This is a most charming place, I sketch hard every day, & naturally think how you would enjoy it all ..."

VESSEL PHOTOGRAPHED. The Terra Nova was steaming about all the time she was in harbour, never anchoring at all. However, she is not fast in her movements, and Miss J. Buckland obtained an excellent photograph of the vessel. This was sent to Christchurch, and will probably appear in this week's weeklies.

Scott is presumed to have died on 29 March 1912, possibly a day later. The world was informed of the tragedy when Terra Nova returned to New Zealand on 10 February 1913.


Sailors Institute.— The local branch of the Sailors' Institute, which has been formed lately in Akaroa, decided to give to the new building in Lyttelton an enlarged photograph of Akaroa. The one selected is that taken by Miss J. L Buckland from Mr W. Hewitt's road, a beautiful view of the town and harbour with H M.S. Challenger in the stream. The enlargement is a most beautiful one, and has been handsomely framed by Mr Len Haylock, making an appropriate gift for the new Sailors' Institute.

Miss Jessie L. Buckland, formerly of "The Glen," Akaroa, who was in London for the Coronation, after spending some time in the Isle of Wight, is now visiting in the country and intends to leave in September or later on her return to New Zealand. Miss Margaret Mackenzie, of South Canterbury, is with her.


Word was received in Akaroa on Friday that Miss J. L, Buckland, youngest daughter of the late Mr and Mrs J. C. Buckland of the Glen, Akaroa and formerly of Otago had died at sea on S.S. Tamaroa. She left England with her friend Miss McKenzie on May 12 and was expected to arrive in New Zealand on Thursday next, June 15. She died at sea on Thursday last, June 8. She had been living in London with Miss McKenzie and finding that her health was not too good determined to return to New Zealand.
Miss Buckland carried on photography business in Akaroa for a number of years and was well known in Akaroa and the Bays for her excellent work. She did not take a prominent part in public affairs but was much esteemed by a circle of friends. Her landscape pictures of Akaroa are some of the best extant and she won many prizes in Dominion competitions for landscape photography. News of her death was received with much regret at Akaroa and many messages of condolence were forwarded to her New Zealand relatives. 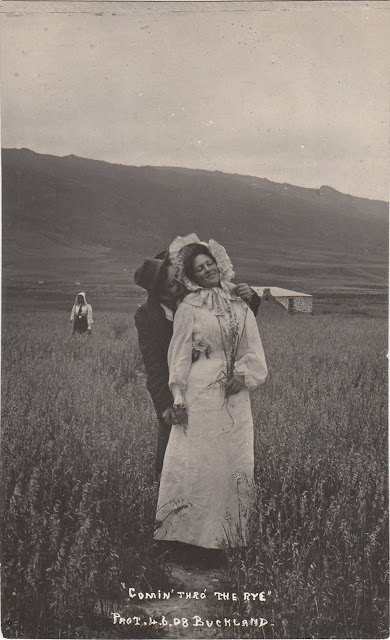 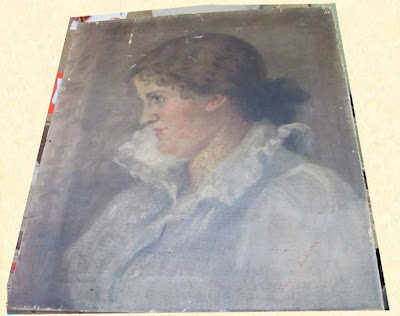 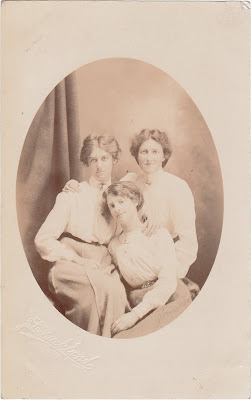 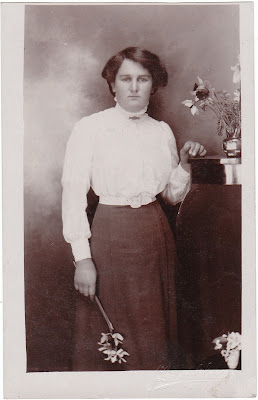 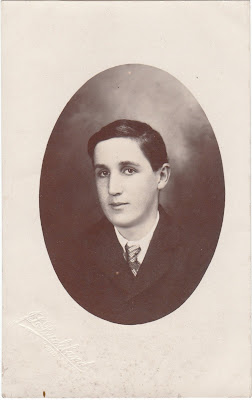 below - photographs of unknown children 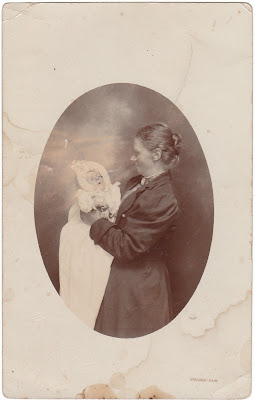 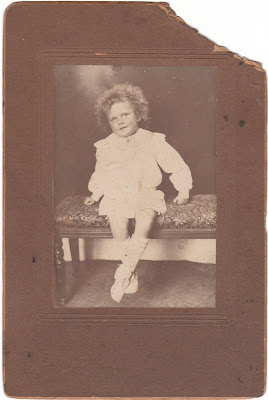 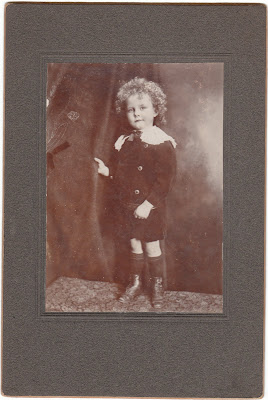 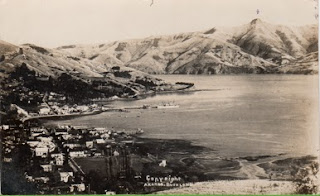 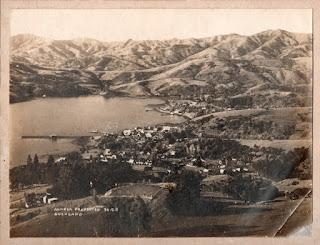