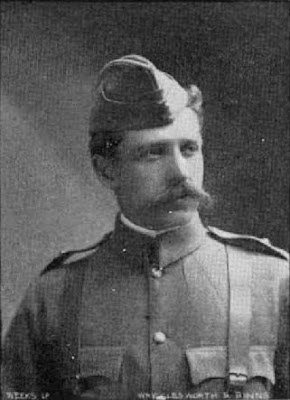 Lieutenant William Charles Finnis, of the Christchurch Cycle Corps, joined the corps on its formation in 1897, when he was appointed lieutenant. He was born at Ballarat, Victoria, and came to New Zealand, in 1896, under an engagement with Messrs Wrigglesworth and Binns. Mr. Finnis was for eight years with the Third Battalion of Victorian Volunteers, and left his corps with the rank of sergeant. He won £16 for volley firing in 1900.
The Cyclopedia of New Zealand - Canterbury Provincial District 1903.
Victoria University of Wellington


ROLL OF HONOR.
(Special to the Herald.) Christchurch, this day. Private advice states that Major W. C. Finnis, of the N.Z. Staff Corps, has been wounded in France. He was in command of the Christchurch group office until he left New Zealand in charge of the 24th Reinforcements. Major Finnis is 46 years of age, and came here from Ballarat in 1891, under engagement to Wrigglesworth and Binns, the well known photographers.
Poverty Bay Herald, Volume XLIV, Issue 14469, 1 December 1917, Page 5