William John Grand was born in Heigham, Norwich, England in about 1836 the son of Eliza and Edward Grand, a tailor.

He arrived in New Zealand sometime before 1864; the Southern Provinces Almanac of 1864, shows him as a photographer in Lichfield Street, Christchurch.

From 1868 to 1875 he was the proprietor of Canterbury Fancy Bazaar located in the Crystal Palace Buildings at the corner of Colombo and Chester Street nearly opposite the Post Office. The Bazaar sold a wide variety of items including books, stationery, sewing machines, deed boxes, safes etc.

He also was a photographer during the period 1872 to 1876 in Colombo Street. He later went into partnership with John Dunlop, the studio was known as Grand and Dunlop.

Star, Issue 1643, 31 May 1873, Page 2
He married Augusta Margaret Grint on 16 May 1867 at the St Andrews Presbyterian Church Manse in Christchurch. The marriage register shows his occupation as a photographer.

Star , Issue 4060, 26 April 1881, Page 2
After the closure of photographic studio of Grand and Dunlop in 1887 he set up on his own account as a photographer, later he worked for the pawnbroker Sigismund Cohen; in 1893 he was a witness in a court case involving the theft of a cornet from the Salvation Army which was pawned at Cohen's office on 11 June 1892. Cohen sold his pawnbroker business to David Bowman late in 1894 or early in 1895. By 1898 he was working on his own account as a licensed pawnbroker in Taylor's Right-of-way, Christchurch. 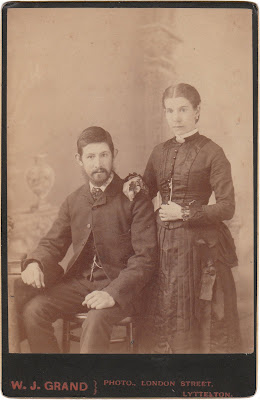 An old man named William J. Grand, a pawnbroker residing in Fitzgerald Avenue and carrying on business in a lane behind Beath and Co.'s shop between Cashel and Lichfield Streets, was found dead in his shop at 1.30 p.m. today by a man named John Barry. The man went into the shop and found the deceased lying on the floor. Dr Symes was called, and said that he had been dead for about an hour. Grand was over seventy years of age, and had carried, on business in the shop for a number of years. The body was removed to the Morgue by Sergeant Hudson and a constable, and an inquest will be held. - The Star, Issue 9681, 25 October 1909, Page 3

ACCIDENTS AND FATALITIES
INQUEST. Mr T. A. B. Bailey, District Coroner, this afternoon held an inquiry into the death of William John Grand, a pawnbroker, who was found dead in his shop in a right-of-way between Cashel and Lichfield Streets yesterday; Detective Gibson gave evidence that he was in the shop at about 11.45 a.m. Deceased then seemed to he in good health, and said that he was feeling well, John Barry, a carrier, said that about 1.30 he went to deceased's shop and found him lying on the floor behind the counter. He brought a constable at once. Constable Murphy said that he found the body in the shop, and nothing there appeared to be disturbed. He removed the body to the Morgue. Dr C. J. Russell said that deceased consulted him in July and was then suffering from kidney trouble and shortness of breath. Witness had not seen deceased since the end of July, but he considered that death was due to syncope. The Coroner returned a verdict in accordance with the medical evidence.
The Star, Issue 9682, 26 October 1909, Page 3 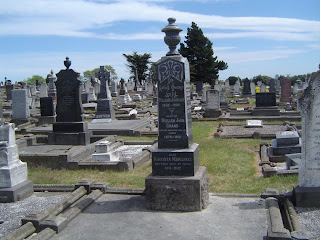 
Posted by Early Canterbury Photography at 3:10 AM