Local Photography.— Mr Etienne J. Brocher has started as a photographer in this town. He has shown us a number of views which indicate that he has considerable ability. For a beginner they are really good, and if he goes on improving as he has during the last few weeks, few artists in the Colony will be his equals in the course of a year or two. 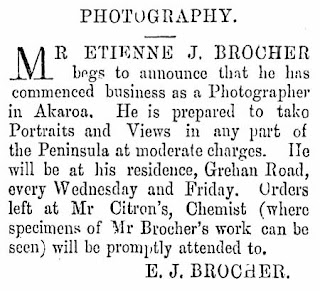 Levanted.— That promising Photographer, Mr Etienne J. Brocher, has sought fresh fields and pastures new. He went to Lyttelton to look after a box and got carried away, somehow, to Sydney. Many here, including ourselves, mourn his departure from our midst for pecuniary reasons.
Akaroa Mail and Banks Peninsula Advertiser, Volume VI, Issue 573, 10 January 1882, Page 2

Etienne Jean Brocher was hung for murder in Wellington in 1897.


THE PETONE MURDERER.
A REMARKABLE CAREER.
Etienne Jean Brocher, or Stephen Bosher, as he is now generally called, who now awaits execution for the murder of Mr and Mrs. Jones, at Petone, has had a remarkable career, says the Wellington "Post."

His earlier history is not known with certainty, but he is said to have been born in 1857 at or near Belfort, now on the Franco-German frontier. The condemned man is therefore now 40 years of age.

Bosher first came under the notice of the police in 1874, when, he must have been 17 years of age. He was then in Timaru, and was arrested on a charge of theft. The case was dismissed, but next year Bosher again came before the Court at Timaru, and received a sentence of 18 months imprisonment for forgery. He was sent to Lyttelton to serve his term, and while there was known to Mr P. S. Garvey, now Governor of the Terrace Gaol. Inspector Pender now recollects the prisoner at Timaru.

On being released from prison Bosher went to Akaroa, and became acquainted with the French settlers there. He worked for one of them, and succeeded so well that on the 1st January, 1878, at Lyttelton he, married the settler's daughter. The wife had been married to him for six months before she found out that he had served a sentence in Lyttelton gaol. Bosher remained in Akaroa for some time. Whilst there he was connected with some trouble about a sum of money collected for a Catholic church, and then, according to his first wife, he stole his father-in-law's deeds in order to raise money on them. He found that he could not do this without his father in-law's signature, and the deeds were returned. Quite in keeping with Bosher's professedly religious habits, as evinced in his attendance at the Petone Salvation Army Barracks, it appears that whilst at Akaroa he taught at times in the Sunday school of the Catholic Church, but of all his French acquaintances at Akaroa it is significant that none speak well of him. Indeed, the only good character he is known to possess is the character of the steward of the s.s. Doric, in which vessel Bosher returned to the colony in the capacity of assistant steward.

In Akaroa Mr and Mrs Bosher lived in the house of the wife's parents, and while there grave scandals were current concerning his family relations. After this he vanished to Lyttelton, but returned a few months later. After his return he continued to live with his wife for two years. During his stay in Akaroa he took up the study of photography, and, according to his wife, got a bill-of-sale over her father's property to pay for learning the art.

In 1882 he again disappeared under peculiar circumstances. He borrowed a horse, saddle, and bridle from his brother in-law, and went to Lyttelton with a photographic outfit. Arriving there, he sold the horse and went to Melbourne. A warrant was issued for his arrest on a charge of horse-stealing, and curiously enough this warrant is still in existence, but the witnesses who would have been able to give evidence at the time are not now forthcoming. Then Bosher is said to have spent some time in coasting boats in this colony, but his life until his return to the colony in 1890 is known only from his own statements.

It appeal's that he went to France, but on arrival there was arrested, either as a deserter or as not having served his full term of military service in the French army. He was sent to Lisle, where, on his refusing service, he was sentenced to four years with the regiment at Algiers. The above is the murderer's account of his adventures, but confirmatory evidence of a certain degree is furnished by the fact that Bosher wrote to the Colonial Secretary of New Zealand from Algiers, demanding his naturalisation papers. He had been naturalised in New Zealand on the 18th June 1877. His name is given on the papers as Etienne Jean Brocher, and his occupation as cuisinier de marine.

The Colonial Secretary forwarded the copies as desired. After receiving his discharge from Algiers, Bosher went to London, and in 1890 shipped thence to New Zealand in the capacity of assistant steward on the s.s. Doric. He came to Wellington, and subsequently lived for some time at the Taita, and more recently still at Petone.

On the 17th August, 1892, he bigamously married, Miss Reece [1892/1195 Mary Ann Reece to John Nathan Stephen Bosher]. Such, as far as can be gleaned at present, is the career of this remarkable murderer. Turning now to the wife he left in Akaroa, we find that she never heard from him after his desertion of her in 1882 until in 1890, when he returned to the colony in the Doric. She had two children, a boy and a girl. In 1890, Mrs Bosher received a telegram which ran "Do you wish to see me ? " and signed "Bosher." She did not reply, and later another telegram came, "Will I come, as I am going back to England ?" On the advice of a man named Nichols, she replied, "No never," and Bosher never troubled her from that day to this. The fact that Bosher was convicted for bigamy, and is now undergoing a sentence for that crime, is well known. A most pregnant sentence in the light of recent events, and a valuable light upon the murderer's character, occurred in a statement made by Mrs Bosher at Akaroa. The words were : — "My husband is the sort of man who, if he knew a man had money in his house, would make friends with him, and after that had been accomplished would take every means to get it. One who did not know him would think him genuine, but he is a bad lot."

Posted by Early Canterbury Photography at 12:12 AM