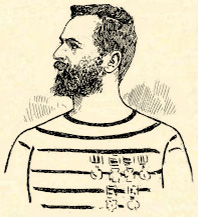 born circa 1858 Ballarat, Australia, died 24 July 1926 at his residence 8 Anglesea Street, Ponsonby, Auckland aged 68 years, buried Purewa Cemetery, married 1909, reg. 1909/2568 Charlotte Margaret Phillips, died 1 April 1943 at Green Lane Hospital.
issue:
Frederick William Edwards reg. 1910/3628
Fred Edwards. Departing somewhat from our ordinary custom, we now present our readers with a portrait of an athlete of another order. Fred W. Edwards is about one of the best and most popular athletes in Auckland, and he is deservedly so, for a more genial fellow it would be difficult to find. In height he stands 5ft 11 inches, but his upright carriage would lead one to suppose he was taller. He weighs 12st 8lbs when in condition, and is a fine man. Fred, who is a native of Victoria, is best known in aquatic and gymnastic circles, and his rowing career began with the North Shore Sowing Club, and then Ponsonby, with whom he has won races. Leaving the last named club, he threw in his lot with the West End Club, of which he is captain. During his rowing career he has participated in many victories, as his medals go to prove. Amongst other wins, he was stroke of the winning crew in the Senior Bonafide Amateurs, and has rowed stroke for the past four years. He also stroked the Senior Amateurs to victory, now known as the Champion Gig Race. But he is far better known as the leading pupil in Professor Carrollo's and his classmates all unite in voting him a first-class fellow, and one who is ever ready to assist a beginner. Fred carried off the gold medal for the gymnasium championship in 1885, and in 1886 he lost it by one point. In 1887 he again won it, and the present year he did not compete, having to fulfill the duties of judge and beside the above, he is a real good footballer, being one of our rising men and one whose career the Rugby Union are carefully watching. By occupation Mr Edwards is a photographer, having the management of Bartlett's studio.
Observer, Volume 9, Issue 512, 13 October 1888, Page 19 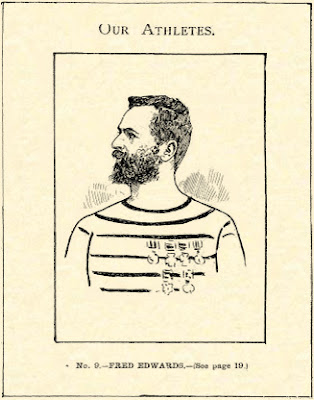 F. W. Edwards
NZ Truth, Issue 300, 25 March 1911, Page 7
Mr. Fred Edwards Dead.
Loss to Trotting.
Leading Auckland Handicapper
The death of Mr. Frederick William Edwards, which took place at his home in Anglesea Street, Ponsonby, last night, at the age of 68 years, means the passing of one of Auckland's most prominent sportsmen. The deceased, who died after a very short illness, was in his day one of the best all round athletes the province has produced, and was a keen follower of many branches of outdoor sport.

In his younger days Mr. Edwards was a prominent pupils of Professor Carrollo, whom old-time sports in Auckland will remember as having the leading gymnasium. Mr. Edwards was a very fine boxer, an all-round gmynast [sic], and as an oarsman he was one of the leading strokes of the West End Rowing Club, and stroked numerous crews to victory, both in outriggers and whaleboats. As a matter of fact, he was one of the original members of the West End Club.
On the football field he was also well known, playing in the eighties for the Ponsonby Club in the days when the big, slow forwards were favoured. Mr. Edwards did a little running on the track, but it was as a starter he was best known in the athletic world.
For years he officiated in this important branch of the sport for the Auckland Athletic and Cycling Club, and in the days when races were started on the racecourses with the flag Mr. Edwards sent the fields away at Ellerslie, and later, when barriers were erected, he had charge of the lever at numerous galloping and trotting meetings. He then extended his activities to handicapping, and was one of the best-known men in New Zealand as a handicapper. For over a-quarter of a century he has been connected with the Auckland Tortting [sic] Club, and has, with but one exception, framed the handicaps for the whole of the trotting meetings held in the North Island. He also handicapped for several racing clubs, included among them being Takapuna, Te Aroha and Pakuranga.

Before he decided to devote all his time to racing and trotting, Mr. Edwards was a photographer, and at one period was farming at Waihou. His loss to trotting will be a severe one, and it will not be easy to fill the position he occupied for 26 years with so much success. Much sympathy will be extended to his widow and son in their loss. The funeral will leave for Purewa to-morrow at 3.30 p.m.
Auckland Star, Volume LVII, Issue 174, 24 July 1926, Page 9
F. W. Edwards
236 Queen Street, Auckland
1890 - succeeded Priscilla Maude Bartlett
July 1890 - August 1897 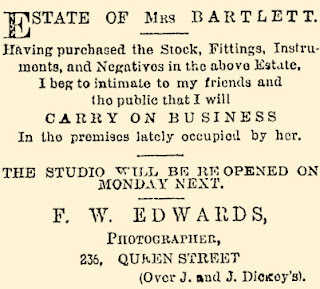 Auckland Star, Volume XXI, Issue 156, 4 July 1890, Page 2
In regard to the recent sale of Mrs. Bartlett's photographic business and plant Mr. Fred W. Edwards announced elsewhere that he has purchased the whole, and will carry on the business at the old premises in the same style as heretofore. Mr. Edwards has been for 16 years connected with this establishment as manager and operator, and the great popularity of the firm's work in years past is a guarantee of the excellence of his abilities as a photographer. All the negatives from previous sittings have been retained by the new proprietor, and copies can be had without trouble, while all portraits will be executed with all the most modern improvements as to style and finish.
New Zealand Herald, Volume XXVII, Issue 8301, 7 July 1890, Page 4 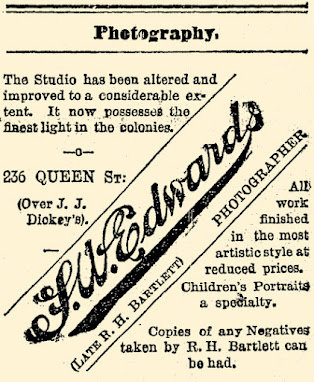 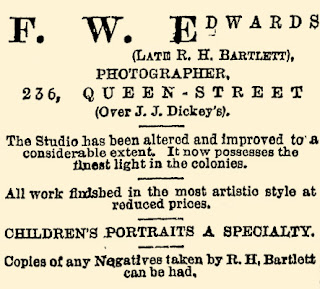 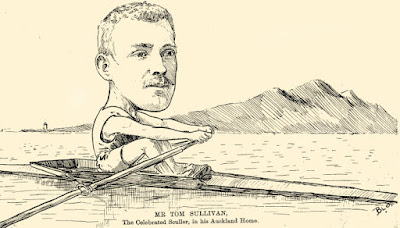 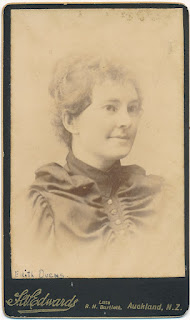 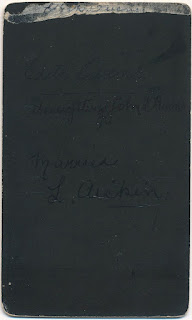 above cdv courtesy of Laurence Eagle 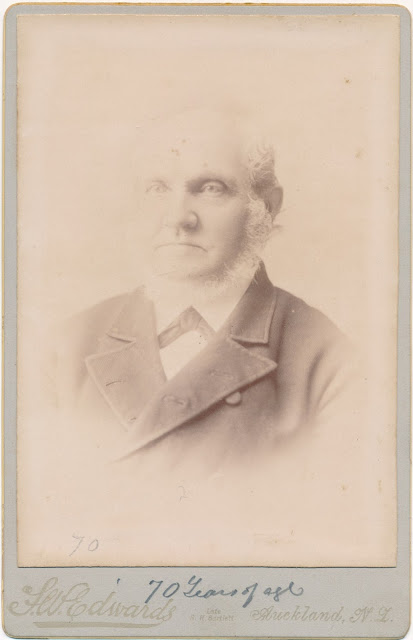 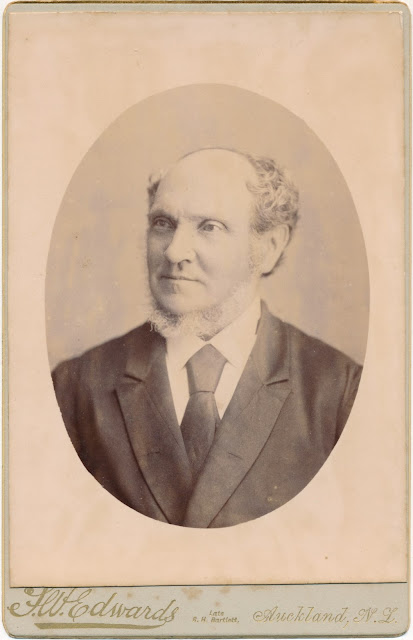 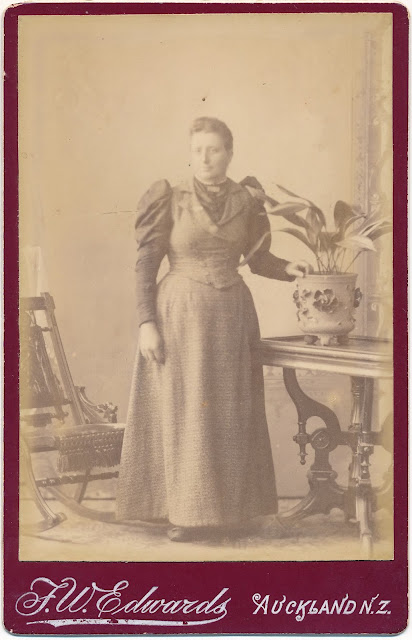 above cabinet card courtesy of Laurence Eagle
F. W. Edwards
Union Bank Buildings
Queen and Victoria Streets, Auckland
August 1897
To inaugurate the opening of his new studios in the Union Bank Buildings, Queen and Victoria streets, Mr. F. W. Edwards, the well-known photographer, announces elsewhere that he will have a "Baby Day" on Wednesday next. All babies will be taken on that day free of charge, and each mother presented with a picture.
New Zealand Herald, Volume XXXIV, Issue 10527, 21 August 1897, Page 4 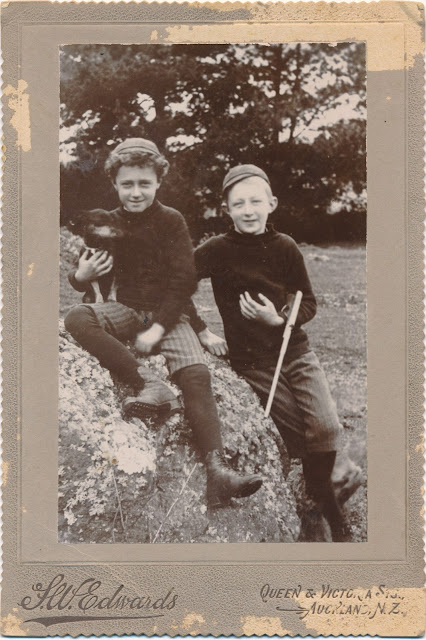 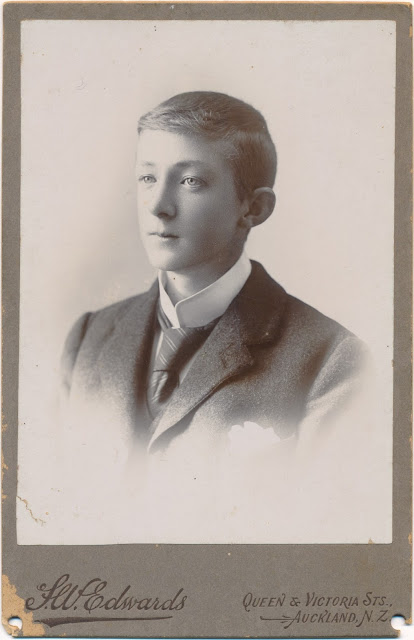 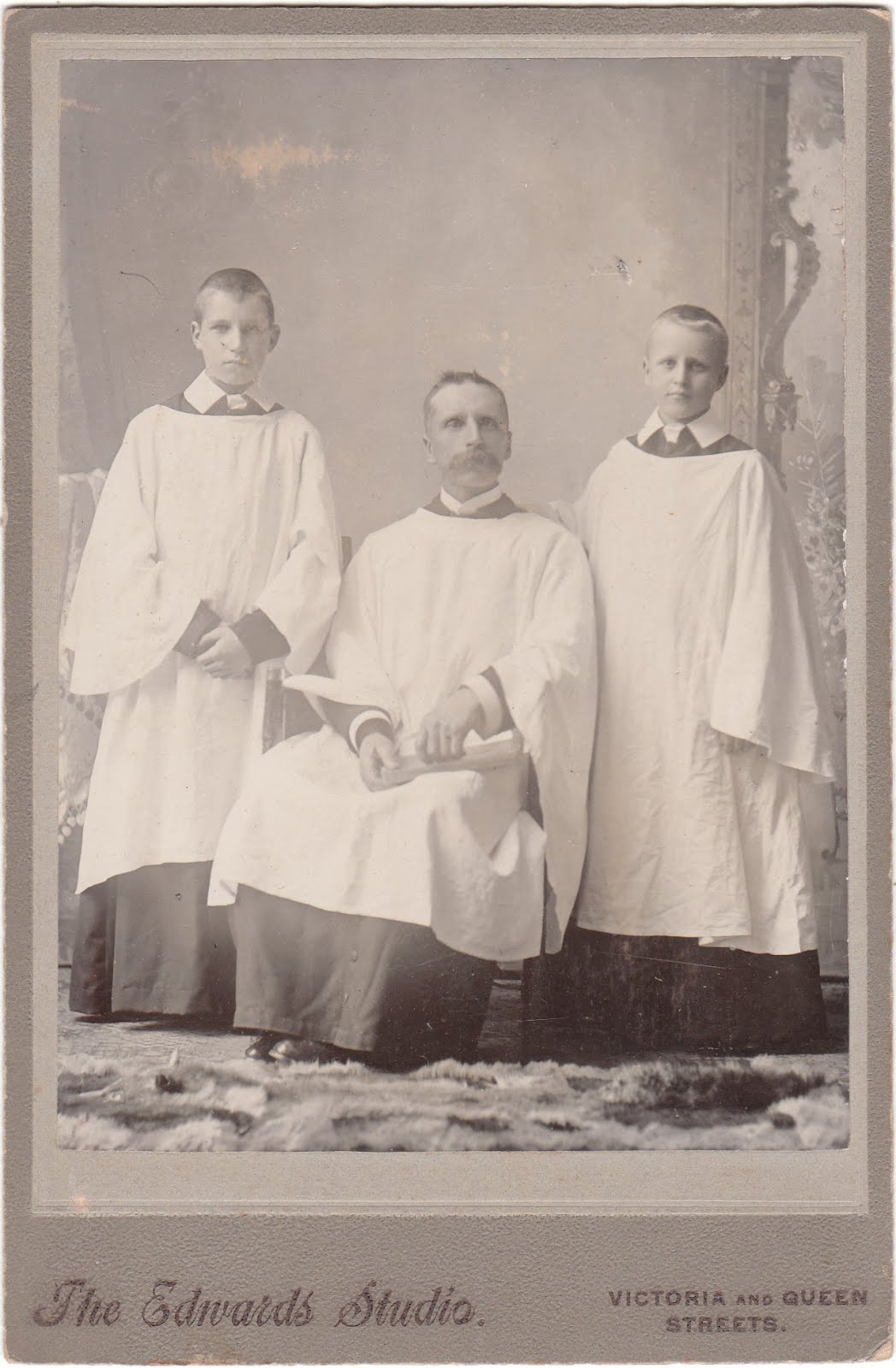 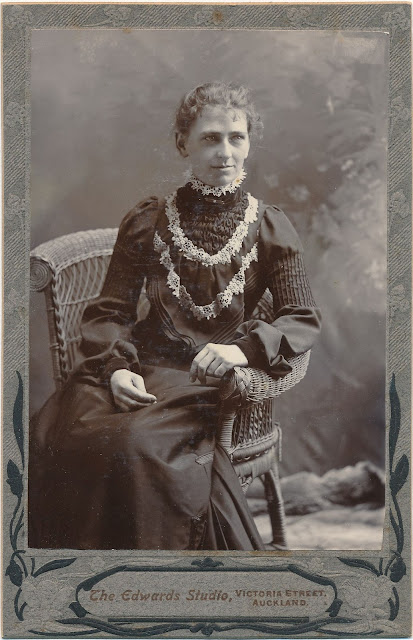 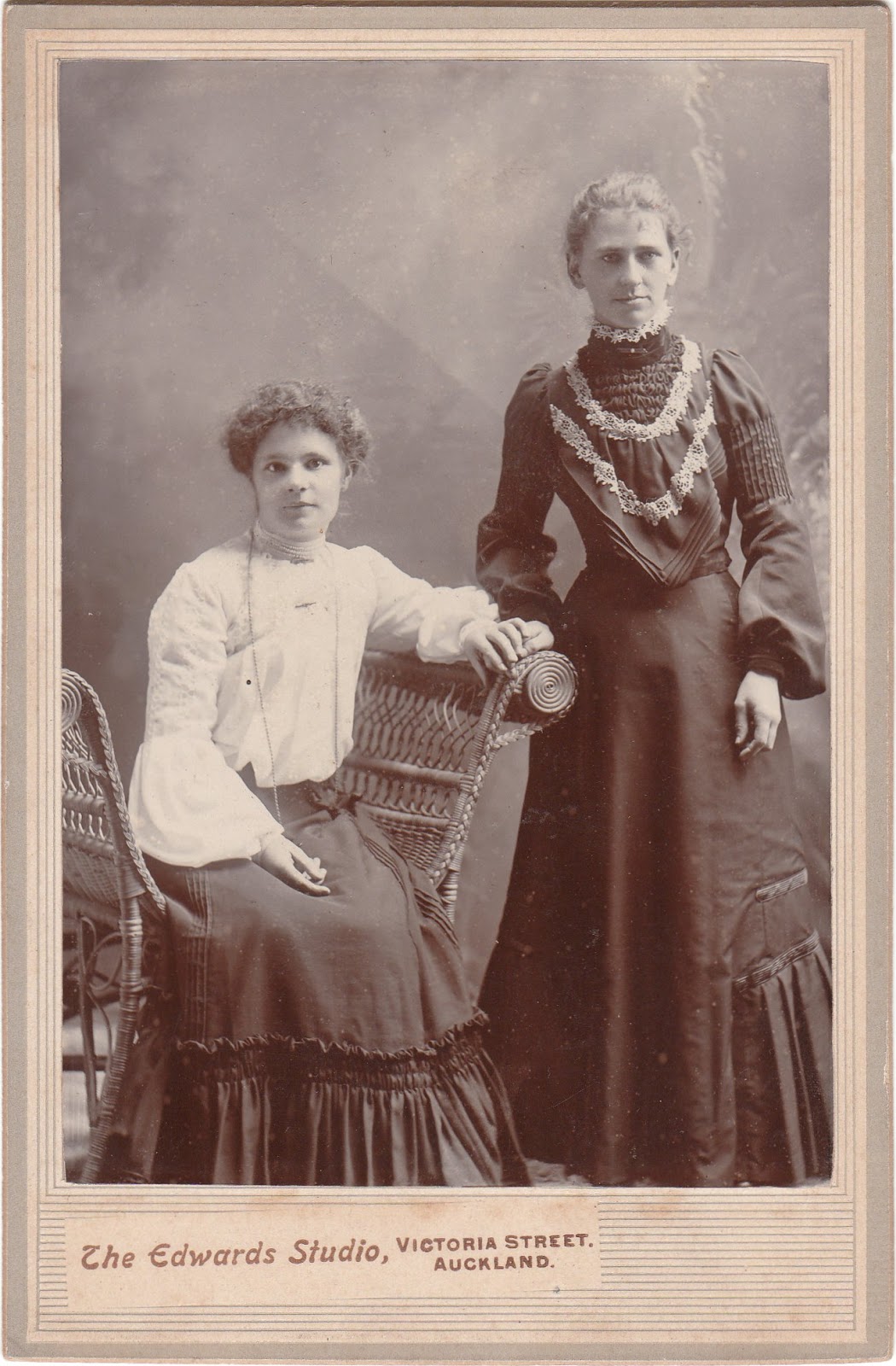 I HAVE A PHOTO ALBUM CONTAINING PHOTO TAKEN BY F.W.EDWARDS FROM THE 19TH CENTURY OF EARLY N.Z. FAMILYS THE ALBUM HAS THE NAME OF JOHN McMUIR SING IN INK AAND DATED 1847 OR 1897 DIFICULT TO SEE

I have a copleat album of edwards work many photos of early n.z. familys i think they are from scotland the album is dated 1847 or 1897 it is dificult to see i would like a reply to this. thanks

any one out there intresstsd in old photos from victorian new zealand took by f.w.edwards

Hello, the date is more likely to be 1897 rather than 1847. I would be very interested to have the album to add to my collection.

The Cabinet Card Gallery blog shows a photo of F. W. Edwards.
Here is the link: