PHOTOGRAPHY.
REDUCTION IN PRICE.
FOR ONE MONTH!
AT THE
PHOTOGRAPHIC STUDIO
Nearly opposite the Town Hall.
CARTE DE VISTES
2s for the first copy, further copies
1s 6d each, or 15s per dozen

As foremen of the Steam Engine Company H. T. Gourlay received a silver medal to commemorate the assistance the members of the Christchurch Fire Brigade gave during the Lyttelton Fire.
The Star, Issue 839, 3 February 1871, Page 4

Mr Gourlay's photographic studio was situated in High Street, in 1871 the City Council considered what action could be taken regarding the roots of a tree near the studio that were forcing up the pavement.
The Star, Issue 842, 7 February 1871, Page 2

After Mr Harris the Superintendent of the Fire Brigade, Mr Gourlay was next in charge.
Star, Issue 1176, 24 November 1871, Page 2

Presentation. — The members of the City Council and Fire Brigade met together at the Lichfield street station last night for the purpose of presenting Mr H. T. Gourlay, senior foreman of the brigade, with a silver clasp for his medal and a clock in recognition of his services in connection with the brigade during the past seven years. The handsome banner of the brigade was suspended over the seat of honour, and the fireman's motto, "Always Ready," was also displayed in a conspicuous position, and the tables were liberally supplied with wine, biscuits, and fruit. His Worship the Mayor presided, having Mr Superintendent Harris, Mr H. T. Gourlay, Councillors Bishop, Ick, Hobbs, and Gapes on his right, and Councillor T. D. Jones, Mr W. R. Mitchell (captain of the Fire Police), Mr D. Craig (agent for the New Zealand Insurance Company), and Mr F. A. Bishop (Fire Inspector), on his left. The Royal, Vice-Regal, and Legislative toasts having been disposed of, the Mayor rose to present the silver clasp to Mr Gourlay. He said he had known Mr Gourlay during the whole of the seven years he had been in the brigade, and he had no hesitation in saying he had throughout acted up to the fireman's motto, " Always Ready." (Cheers.) Mr Gourlay had done honour to the brigade during the whole time he had been connected with it, discharging his duty well, and earning the goodwill of everyone, and as merit should always be recognised, he had very great pleasure in presenting him, on behalf of the City Council, with a silver clasp for his medal. (Cheers.) Mr Harris then rose and, after passing a high eulogium upon Mr Gourlay's conduct while a member of the brigade, and his great regret at the loss of his services, presented him with a handsome English timepiece, in a marble case, remarking that every member of the brigade had subscribed towards it, thus showing he was held in high estimation by all. Mr Harris then called upon Foremen West, Doran, and Roberts, who successively bore testimony to the good opinion entertained of Mr Gourlay by all the members of the brigade. The Mayor then proposed the health of Mr Gourlay, which was drank with musical honours. Mr Gourlay responded in a lengthy speech, thanking all for the honour they had conferred upon him that evening, giving good sound advice to the members of the brigade, and suggesting that as the superintendent of the brigade had so many applications from persons desirous of joining the brigade, a contingency brigade should be formed, the members of which could be occasionally exercised with the plant, and who would be much better to fall back upon when vacancies arose than raw recruits. Mr Harris then proposed the health of the Mayor and City Council, to which the Mayor, Councillors Jones, Bishop, Ick, and Gapes responded. The toasts of "The Fire Brigade," "The Fire Police," "The Insurance Companies," "The Ex Mayors" "Town Clerk," "City Surveyor," and "The Ladies," were also drank, the speeches being interspersed by songs from Messrs T. Hobbs, F. Hobbs, J. Goodman, Bowen, Samuels, Triggs, W. Hobbs, and others. The silver clasp bore the following inscription: - "For seven years good services;" and the clock the following : - "Presented to H. T. Gourlay by his comrades in the Christchurch Volunteer Fire Brigade. Oct., 1874."
Star, Issue 2072, 28 October 1874, Page 2

Runaway. - Henry T. Gourlay was charged with having neglected to remain sufficiently near his horse and vehicle in the Market place as to have proper control over them. Constable Lamb said he saw the horse going through the Market place unattended, and he stopped it just as it was breaking into a gallop. Accused said he was not far away when the horse started, and he could have stopped it easily enough if people had not frightened it by throwing up their arms and shouting. A fine of 10s was imposed.
Star , Issue 2082, 9 November 1874, Page 2 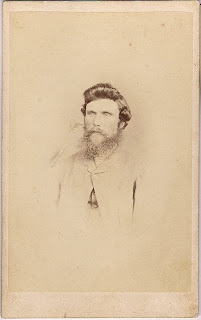 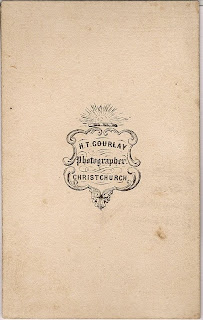 above - an unnamed man by H. T. Gourlay, Christchurch 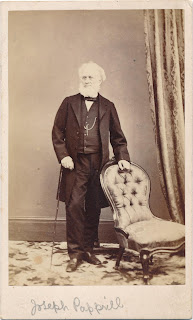 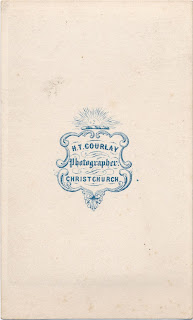 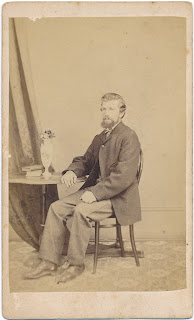 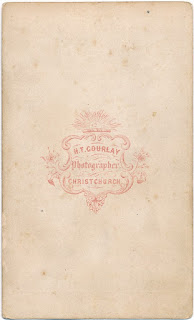 above - an unnamed man by H. T. Gourlay, Christchurch
courtesy of The Laurence Eagle Collection

Posted by Early Canterbury Photography at 12:51 AM