Hubert David Bettger was born in Finchley, England the son of Alfred Bettger, a contractor's clerk and Georgina Sarah nee Ship. His mother died in 1879 aged 25. In 1881 his father married Sarah Davey.

The 1891 census shows him living at 1 Kingswood Road in London, then aged 17 years and employed as a carpenter, he arrived Wellington, New Zealand on 18 November 1891 on the R.M.S. Arawa from London, via Plymouth, Teneriffe, Capetown and Hobart [1]. He married Susan Frances Johnston at St Michael's Church, Christchurch on 28 November 1899 when he was aged 26 years. Witnesses to the marriage certificate were the photographers G. E. A. Burrell and L. E. Burrell of 153 Chester Street. He died in 28 July 1935 in Rangiora aged 62, Susan Bettger died in Christchurch on 14 August 1943.

Mr H. D. Bettger
Mr Hubert David Bettger, who had been in business in Rangiora as a photographer for 37 years, died suddenly at his residence in High street yesterday at the age of 62. He was born in Finchley, London, in 1873, and came to New Zealand in his early twenties.

After spending some time in Christchurch he began business in Rangiora, where he has since remained. Mr Bettger was a keen angler, and was well known in gun club activities. For the last 17 years he was secretary of the North Canterbury Gun Club, and for the last two years on the South Island executive of the New Zealand Gun Clubs' Association. He was also actively associated for many years with the Rangiora Volunteer Fire Brigade, and when he retired from active service he had completed 17 years of service. He was a well-known Freemason in the North Canterbury district, and was a past master and a life member of the Ashley Masonic Lodge. He was a foundation member of the Royal Arch Chapter and a past-arch Druid of the Rangiora Bud of Hope, U.A.O.D.

Obituary
Hubert David Bettger
Anglers and gun shooters throughout New Zealand will have heard with regret of the death of Mr Hubert David Bettger at his home in Rangiora on Sunday morning. Mr Bettger celebrated his sixty-second birthday earlier this month, but he was still an active secretary to the North Canterbury Gun Club after seventeen years' service. It was a custom rather than a formality at each annual meeting of the Club for some member to praise the secretary for conscientious work done during the year, just as it was Mr Bettger's custom to deprecate such praise with the explanation that he did the work for the sole reason that it interested him and he liked doing it.

He was a keen angler and seldom missed the opening of a season. His angler's tales delighted many a gathering of sportsmen, and few men knew the Canterbury fishing rivers with such familiarity as he. He often recalled days when local streams abounded in fish, and had many a story to tell of matching wits with wily trout in the Cam, for instance.
Lately he had taken more interest in the government of sporting bodies than in actual participation in the sport, and for two years he had been a member of the South Island Executive of the New Zaeland [sic] Gun Clubs Association.

The Rangiora Volunteer Fire Brigade benefited by his services for nineteen years. He was at one time Junior Foreman of the Brigade, and a member of the committee.

Mr Bettger was a well-known Freemason in the North Canterbury district, and was a past master and a life member of the Ashley Masonic Lodge. He was a foundation member of the Royal Arch Chapter, and a past Arch Druid of the Rangiora Bud [sic] of Hope, U.A.O.D.

Apart from his activity in the lodges and on other bodies, Mr Bettger was best known as North Canterbury's photographer. Born in Finchley, London, in 1873, he came to New Zealand when in his early twenties. After spending some time in Christchurch he came to Rangiora to set up in business and remained here during the ensuing thirty-seven years. A year after arriving, in the district he married Miss Susan Frances Johnstone, who survives him.

THE FUNERAL
The funeral was conducted this afternoon by the Ven. Archdeacon A. C. Purchas. A number of lodge members, shooters, and other friends attended. The pall bearers were Messrs E. D. R. Smith, G. A. Bruere, O. Nelmes, A. Prestney, W. Smith, G. Harlow.

Dr L. M. King stated in evidence that he had been called to the residence of deceased shortly before noon on July 28. The condition of deceased when he arrived was such that death occurred before any treatment could be carried out. He had prepared the stomach to be sent to the Government Analyst, and had since seen the Analyst’s report, with which he agreed.

Constable A. V. Smith said he had been called to the home of deceased, and had taken the body to the morgue. He had obtained a measuring jar from the photographic dark room used by deceased, and this had been sent to the Analyst with the stomach. The dark room was full of jars and receptacles, and he could not express any opinion as to whether the poison was taken accidentally or intentionally.

The report of the Government Analyst stated that, the stomach had been found to contain a considerable quantity of alkaline cyanide. This would cause death very rapidly. The measuring jar contained traces of cyanide. Preparations containing cyanide were extensively used in photography.


Inquest
Death of Mr. H. D. Bettger
An inquest into the death of Hubert David Bettger, whose death occurred at his home in High Street, Rangiora, on Sunday morning last, was held in the Rangiora Magistrate's Court yesterday afternoon, before Mr H. A. Young, S.M., as Coroner.
Susan Frances Bettger, widow of the deceased, gave evidence of identification and stated: "During the past week he complained of his work. It seemed to worry him and he appeared depressed. On Sunday morning he rose at 9.30 a.m., came downstairs, had a cup of tea and something to eat, and then went into his dark room to work. I spoke to him about 11.30 a.m. through the door of the dark room and asked him what time he wanted dinner. He replied: 'Any time it suits you.' About noon I was coming downstairs and through a window I saw him lying in the back yard near the dark room door. I went to him and be did not speak to me, so I rang for a doctor. He had never suggested taking his life. He had always been of a cheerful disposition."
The inquest was adjourned sine die pending a chemical report on the results of a post mortem conducted by Dr L. M. King.
North Canterbury Gazette, Volume 4, Issue 41, 30 July 1935 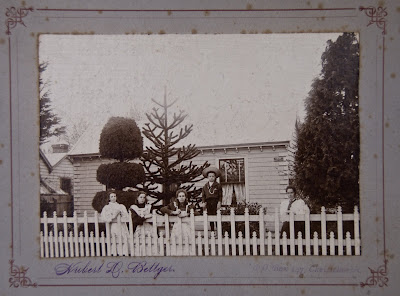 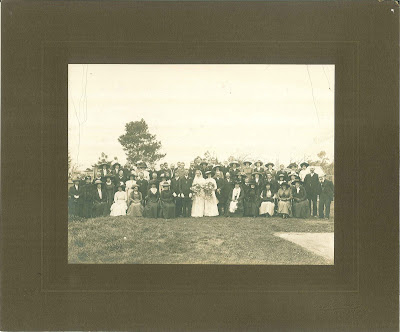 Photograph of an unknown wedding group. 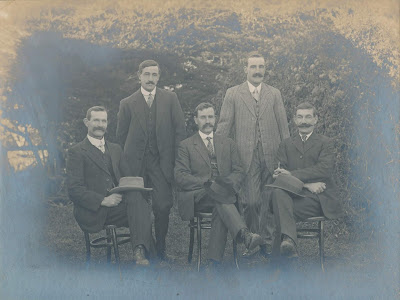 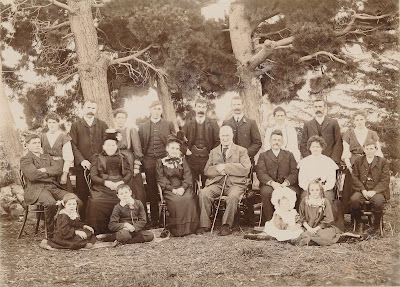