St. Paul's Young Men's Association. The usual weekly meeting of this association was held last evening in tho session room. The subject for the evening was an essay by Mr Ferrier, entitled "A Cursory Glance at Light and Photography." The essayist handled his subject in a very able manner, and gave great satisfaction to his hearers. Several criticisms followed, after which a hearty vote of thanks was accorded to Mr Ferrier for the trouble he had taken in preparing his essay.


Magic lantern entertainment. A magic lantern entertainment in aid of the funds of Wesley Church Sunday-school took place on Friday evening, in the Church. Among the views were a number of local photographs taken by Messrs Ferrier and Rock, the former of whom exhibited them; the Rev. Mr Dewsbury officiating at lecturen(?) and Miss Ferrier presiding at the harmonium. A very pleasant evening was spent.


A magic lantern entertainment was held in the Wesleyan Church on Friday evening last, for the benefit of the Sunday school library. Many of the views, which were local, and taken for the occasion by Messrs Ferrier and Rocke (successors to Mr C. Martin), produced immense applause. The Rev. Mr Dewsbury described each view as it was seen, while Miss Ferrier attended to the musical department.


We have been shown a panoramic view of Oamaru, photographed by Messrs Ferrier and Rock, of Thames street. Oamaru ranks amongst the most beautiful of the towns of New Zealand, and the photographers have done full justice to it, inasmuch as they place before the public a good picture and a correct view of what Oamaru is like at the present time. The view includes the whole of the town, and was taken from the hill on the west side of Reed street. The picture is one unbroken view of the town, and can be made to occupy a very small space, owing to its being arranged to fold into a size of six inches by four inches. This feature is intended to lessen the danger incidental to sending larger photographic views by post. As a view of Oamaru it is well worth the purchasing, if not to send Home, at least for its artistic merit.


We had the pleasure yesterday of inspecting some very nice photographs of the waterworks, taken by Messrs Ferrier and Rock of this town. There were about half a dozen in number, and represent the principal points of interest, from the settling pounds at the river to the reservoir. The Awamoko aqueduct is an excellent picture, and is perhaps the best of the series, though they are all remarkably good and true to nature . The picture likely to prove of most interest, that of the splendid aqueduct in Frews Gully, is not yet finished. The views are cabinet size, and well-worthy the inspection of amateurs.


The photographic view of the town executed by Messrs Ferrier and Rock, to the order of the Chamber of Commerce, is on view at the shop of Mr M'Corkindale, Thames street. The photograph is intended to be sent to the Sydney Exhibition. It is artistically finished, and gives a very fair idea of the size of the town. The view is eight feet in length.


Messrs Ferrier and Rock have been appointed photographers to His Excellency Sir Hercules Robinson.


In the new hall, Tees street, on Tuesday night, at 8 o'clock, Mr J. W. Rock will deliver a lecture on the Holy Land. Photographs and lime light will be used to illustrate the speaker's remarks. 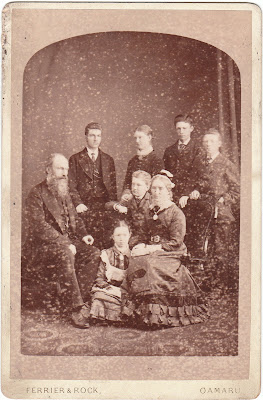 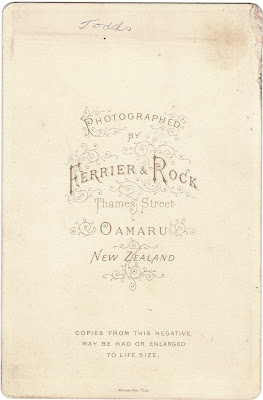 Fire in Wear Street.
At about half-past one o'clock this morning, a fire broke out in the premises occupied by Robert Keenan, in Wear street, and resulted in the total destruction of the building, besides doing considerable damage to those adjoining. The alarm was first given by a man named Charles Lawson, who was living in the house occupied by Keenan. He was suddenly roused from sleep by a choking sensation, and found the bedroom, which was on the upper floor, full of smoke. Rousing the other inmates, he jumped out of the window and ran down the street, when he met with the police who were on night duty, and to them he communicated the intelligence.

Constable Jackson at once went to the spot, an found the flames coming out of the front portion of the building, used as a shop, and from observations which he afterwards made, he concluded that it was in that part that the fire originated, A number of people soon gathered, and Keenan's furniture, together with the stock in Mr James's Venetian blind manufactory, next door, and the papers, books, &c, in Mr Hardy's office, were safely taken out. The fire spread with great rapidity, and soon caught the roof of Messrs Lintott and Otterson's malthouse, which was divided from Keenan's by a narrow right-of-way, and communicated with the photographic studio of Farrier and Rock, above Mr James's shop, which was also detached from the burning building.

The Fire Brigade shortly arrived, and although some difficulty was experienced in getting water, the engine soon extinguished the fire in the malthouse, and the hose was then brought to bear on Mr Hardy's building. The supply of water which had been obtained from a tank at the rear of Bailie & Humphrey's then failed, and much time was lost in getting a fresh supply. This was ultimately obtained, and in a little more than an hour from the time of the first alarm the fire was under command.

The brigade behaved splendidly, and much credit is due to them for the way in which they worked in the face of the great disadvantage caused by scarcity of water. The full extent of the damage cannot yet be ascertained. Keenan's house, which was the property of the creditors in Mr Kite's estate, being built of wood, was totally destroyed, but the damage done to the adjoining buildings was chiefly to the flooring and roofs, and could not, at the time of going to press, be accurately estimated. The injury to the malthouse is only trifling. The buildings, and it is believed the furniture and stocks were insured, but for what amounts could not be ascertained.

Messrs Ferrier and Rook will be heavy losers, most of the negatives, chemicals, and many of the fixtures being destroyed. Regarding the manner in which the fire originated nothing beyond what has been stated could be elicited. Keenan was away at the time, and the inmates say they were all fast asleep. 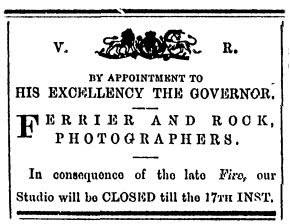 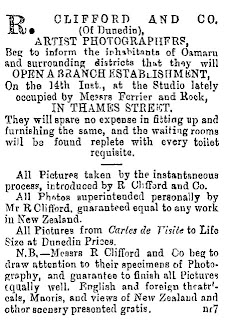 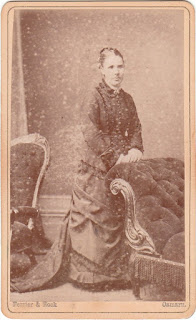 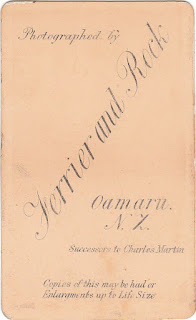 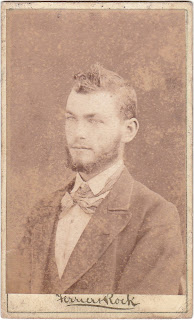 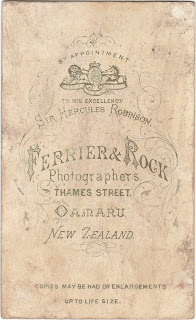 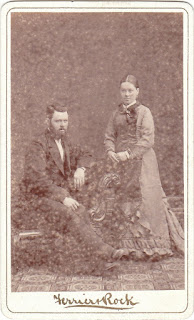 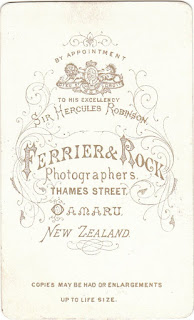 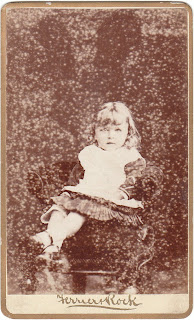 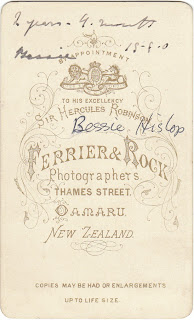 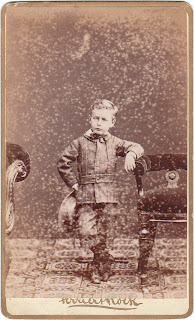 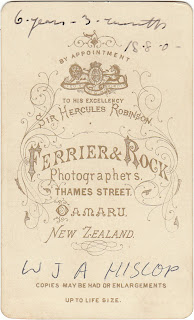 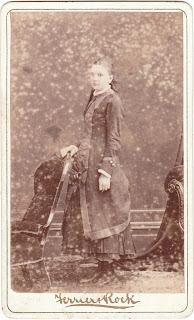 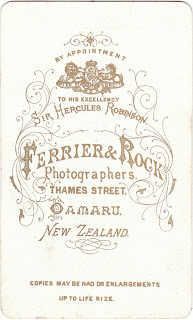 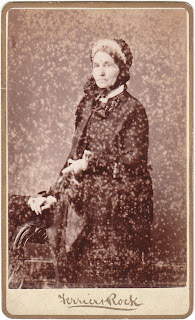 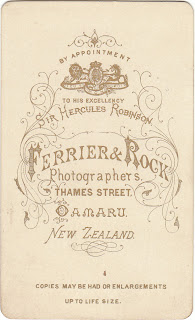 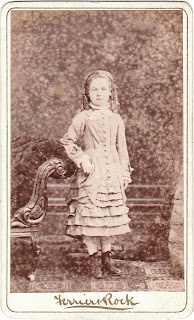 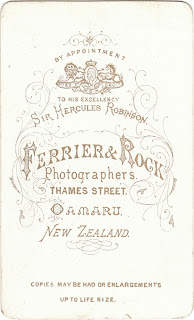 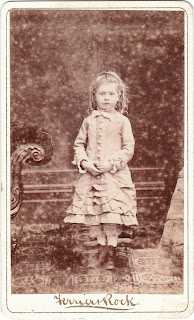 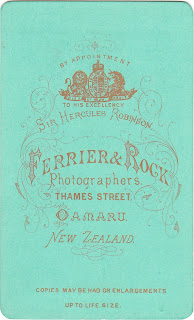 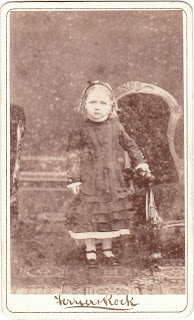 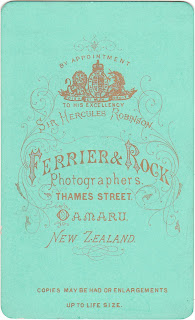 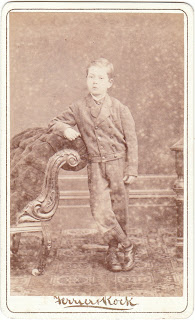 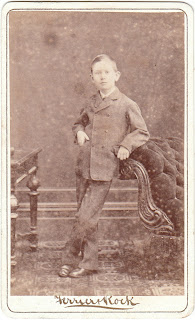 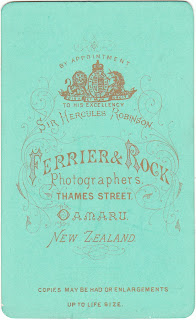 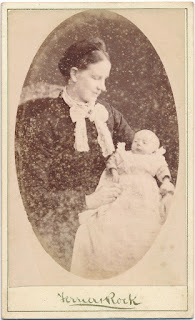 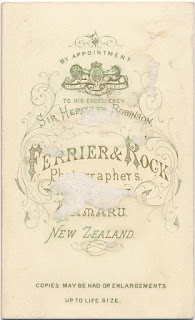 above cdv courtesy of The Laurence Eagle Collection
Posted by Early Canterbury Photography at 4:59 PM