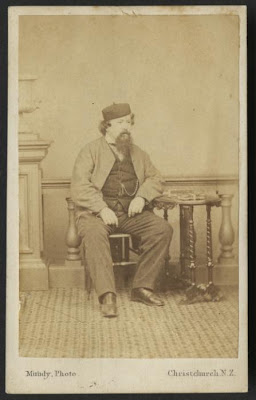 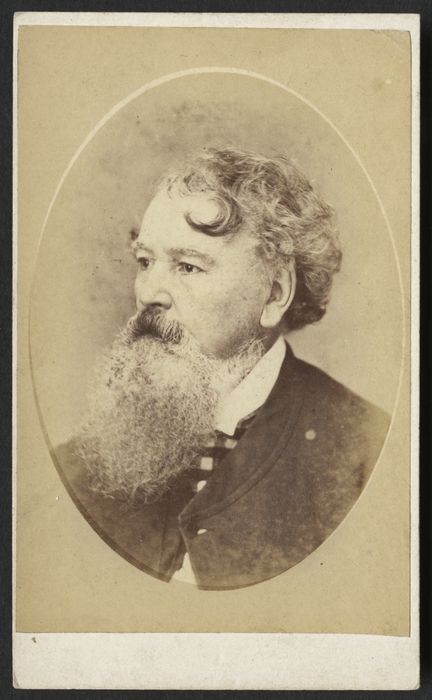 PORTRAITURE
"Secure the shadow ere the substance fades" Shakespeare.
Mr Elsbee's Photographic Portrait Rooms, London Street, (next door to the Albion Hotel), are now ready for the reception of visitors.
Likenesses in the first style of the Art, by the new collodion process, and beautifully coloured, taken daily from 9a.m., to 5 p.m.

ON PHOTOGRAPHY
The very marked attention which this almost magical Art has received from the public is an evidence of its great merit and beauty.
It is a new and unequalled means of preserving the lineaments of those who are esteemed or loved; of retaining the prefect likeness of members of families, or friends who are separated, or about separating; of conveying a faithfully impression of the living countenance to and from friends long parted and at great distances; these, and the gratification of the family and social circle in the beautiful miniature representation of its own members, the almost speaking portraits of friends, present or absent, with the melancholy satisfaction to relatives of retaining the prefect resemblance of the lost in death, - these are some of the many objects of deep and touching interest to which the most surprising and delightful Art is applied.


MINIATURES, LANDSCAPES,
and subject of every description accurately copied, and neatly set on Morocco Cases, Gold Lockets, Rings, or Breastpins.
A great variety of Beautiful STEREOSCOPES and MARINE GLASSES on sale.
The Art carefully taught, and apparatus of the finest and best manufacture supplied on liberal terms.

We must not omit to notice the arrival of a new photographic artist among us, Mr. Elsbee, who has taken up his quarters in London-street, in this town. Mr. Elsbee has adopted the collodian form of photography, and the specimens which line his rooms prove him to be a practical performer in the art. We have had the pleasure of inspecting his handiwork in different shapes and various styles, and we are bound to say that he unites the artist with the practised operator so as to produce portraits superior to any which have yet been obtainable in Canterbury.

8 January 1859
Kaiapoi and Rangiora
Photographic Portraiture.
Mr J. Elsbee begs to announce to the inhabitants of Kaiapoi, Rangiora, and the vicinity, that his

PHOTOGRAPHIC ROOMS,
(built expressly for the purpose),
at Mr. G. Day's new house, will be opened
about the 19th instant.
Mr. E.'s visit will be limited, and it is highly improbable that an opportunity will again occur of obtaining a portrait of such exquisite beauty and finish as the process employed by Mr. E. produces.
To prevent disappointment, an early call is absolutely necessary.
Miniatures, Landscapes, and subjects of every description accurately copied, and neatly set in Morocco Cases, Gold Lockets, Rings, or Breastpins.

A great variety of beautiful Stereoscopes
on Sale.
The art carefully taught, and apparatus of the finest and best manufacture supplied on liberal terms. - The Lyttelton Times, 8 January 1859. 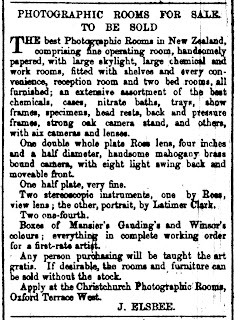 29 March 1862 - Among the passengers, per Omeo, we notice Mr. Elsbee, the well-known photographist, who has returned to Canterbury again, to pursue his profession. - The Lyttelton Times, 29 March 1862 page 4.

12 April 1862 - We perceive, by an advertisement in to-day's issue, that Mr. Elsbee opens his studio on Monday next, and that he promises some novelties in the photographic art. It will not be esteemed any flattery, by those who have the pleasure of knowing that gentleman, in us to say that he will more than realise the hopes he has raised. 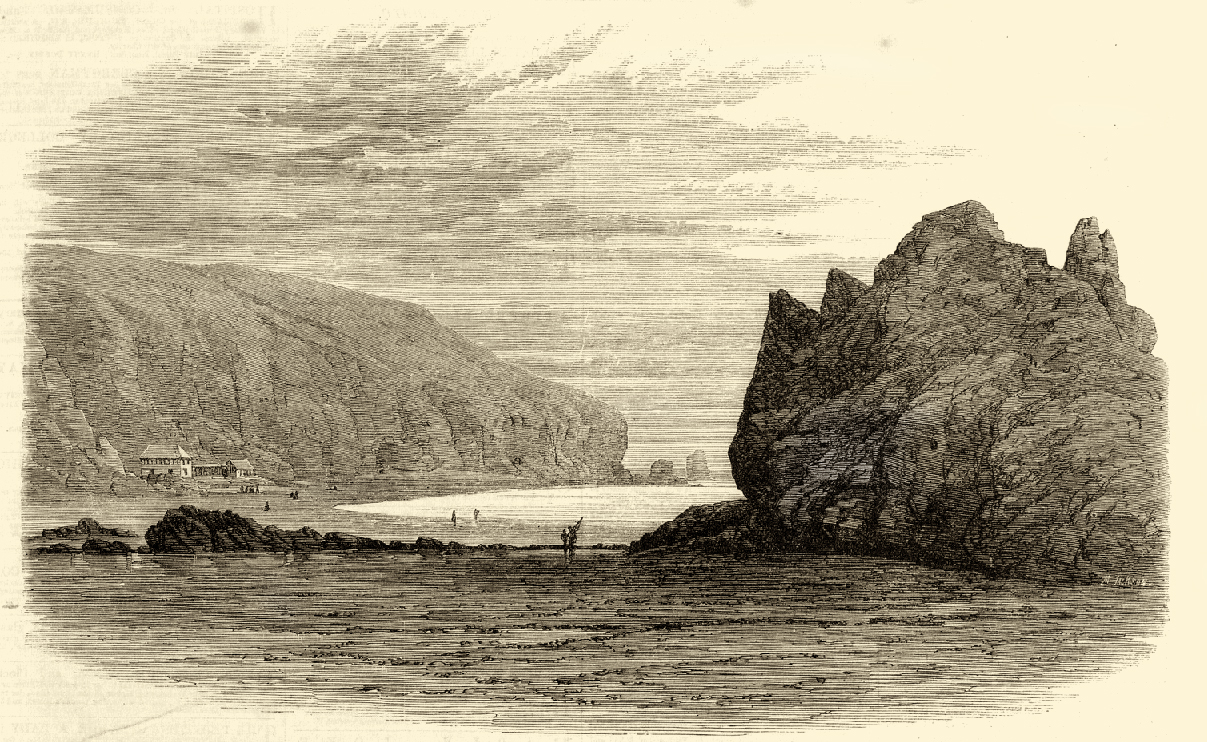 THE CANTERBURY PHOTOGRAPHIC ROOMS,
CORNER OF HEREFORD STREET, AND OXFORD TERRACE WEST,
WILL OPEN ON MONDAY APRIL 14TH,
CONDUCTED BY MR. J. ELSBEE,
PHOTOGRAPHIC STUDENT OF KING'S
COLLEGE, LONDON,
And Chemical Pupil of T. Sutton, Esq. B.A.,
(author of the Photographic Dictionary, Photographic Notes, &c., and
Late Lecturer on Chemistry at King's College.)
Mr. E. begs to announce to his former patrons and the public generally, that during his absence from Canterbury, he has availed himself of the instruction of the first master in the science of Potography (sic), particularly in the negative process, by which numberless portraits can be produced from one copy.


THE CARTE DE VISITE PORTRAITS,
One of the most pleasing forms of Photographic Portraiture is the Carte de Visite. The distinguishing characteristic of these portraits is their including a full length; this constitutes the charm of the picture, for the photograph is no longer a fragmentary of a half or three-quarter length, or the mere head, but comprises a complete portrait of the whole person.
Mr E. has great pleasure in informing those friends who are anxious to have correct portraits of the rising generation, that he has procured a new Camera, (invented and patented by Mr. T. Sutton, B.A*.,) by which perfect likenesses of very young children can be taken instantaneously.
Views, Gentlemen's Seats, Stations, Churches, Landscapes, &c., taken by the new Tannin Preservative Process.


*Sutton had the distinction of being the first to develop a true single-lens reflex camera. This he patented in 1861. The camera was manufactured by Thomas Ross and J. Dallymeyer. Brian Coe, in his book "From Daguerreotypes to Instant Pictures" states that Dallymeyer used to charge £2.75 for a quarter-plate model.


Canterbury - In the Canterbury Department are twelve views of the country, by James Elsbee, about Christchurch, which are very good specimens. Among those particularly deserving of notice are "Entrance to the Tunnel, Heathcote Valley;" an "Evening Scene", "Kowai", "The Club House and Government Buildings" also, a "Winter Scene" at Christchurch, and a "Stormy Effect" in Lyttelton Harbour. There is, however, a want of sharpness in some of the other pictures in this frame, which detracts from their otherwise good character as photographs. They are, however, on the whole, exceedingly good specimens of photography, and admirably represent the scenery that surrounds Christchurch and Lyttelton. 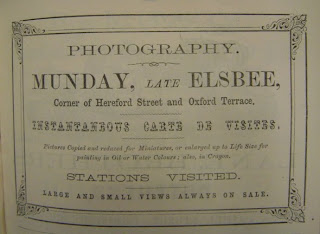 G. R. Macdonald Dictionary of Canterbury Biographies - Canterbury Museum.
Elsbee J, was a new photographer who stated business in London Street, Lyttelton, January 1858. He was considered more skillful than the semi-amateurs who had been practicing up to that time. Mountfort (who taught Dr. Barker) and McCardell were two of the best known.

When he first came to Canterbury he was intending to stay for a short time only and then move on elsewhere. However he seemed to find Christchurch a satisfactory place in which to practice his art and he settled down there in permanent rooms in Oxford Terrace West. However in June 1859 he offered for sale his rooms and the whole of his plant. He offered to teach the purchaser his craft. He was there for another year, but in June 1860 Messrs. Hughes & Bullock announced themselves his successors and pupils.He left Canterbury but returned in March 1863 (or 1865 writing unclear) and started in business again. He had all the latest improvements - carte-de-visite portraits - a new process by which numerous portraits could be produced from one negative. Also full length portraits and a new camera invented and patented by T. Sutton B.A., which could take instantaneous pictures - very suitable for children and portraits. He had also for sale field glasses and stereographic transparencies. On 20 October 1865 he brought RS 9509 on the west branch (bank?) of the Hawkins.


The William Sefton Moorhouse statue in the Botanic Gardens, Christchurch was based on a portrait by James Elsbee.

Final Years
The 1881 census shows him living at Lensvilla, Laira in Devon, England, he was then aged 71 years and unmarried. His occupation is shown as "Colonial (NZ) Land Owner", he has one servant Phebe Horton aged 23 years. On his death in 1885 his nephew Richard Parker, painter, Lucas Street, Commercial Road, London received "... all my books, photographic apparatus and appliances of every kind, chemicals, negatives ..."

A Canterbury Album - Joan Woodward, 1987
The whereabouts of Elsbee's original plates are not known, but a collection of about 80 of his original albumen prints was brought to Christchurch in April 1982 by a dealer from England who had brought them about thirty years previously; the majority of these were purchased by the Canterbury Museum. A few of them are portraits, but the views, along with Barker's, are the earliest photographic record of the towns of Christchurch and Lyttelton and of the surrounding areas.

In 1868 Daniel Mundy, moved his photographic business to Elsbee's studio in Oxford Terrace.

Be it known that upon search being made in the District Registry attached to the probate Division of her Majesty's High Court of Justice at Exeter it appears that on he twenty first day of May 1885 the last Will and Testament of James Elsbee late of no. 7 Saltram Villas, Laira in the parish of Egg Buckland in the County of Devon, Gentleman, deceased, who died on the twenty sixth day of January 1885 at Laira in Egg Buckland aforesaid and had at the time of his death a fixed place of abode at Laira within the District of the County of Devon was proved and registered in the said District Registry and that administration of the personal Estate of the said deceased was granted by the aforesaid cavit to Robert Parker of no. 245 Rotherhithe New Road in the parish of saint Mary Rotherhithe in the county of Surrey Accountant, nephew of the deceased, one of the Executor named in the Will, power being .. of making the like Grant to Thomas Pike the other Executor, and which probate now remains of record in the said District Registry. The true tenor of the said Will is in the words following to wit:-
I James Elsbee of Number 7 Saltram Villa .. to be continued
Posted by Early Canterbury Photography at 3:27 PM